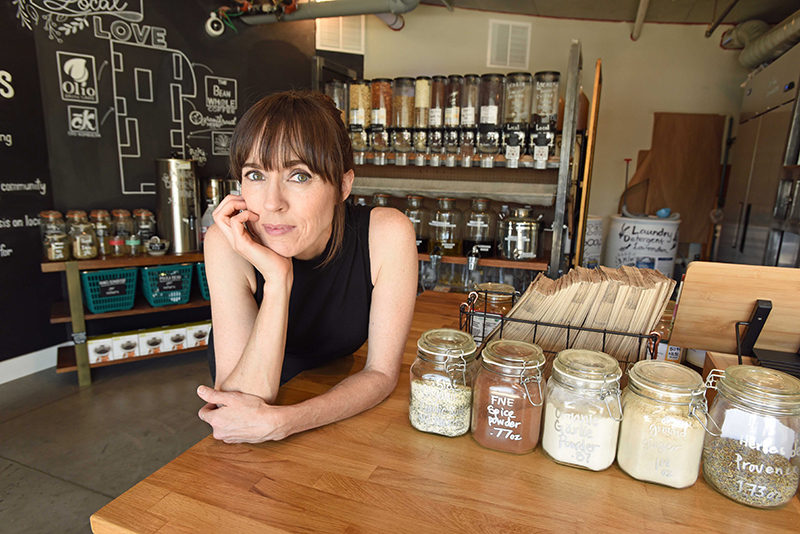 It has been a long and arduous journey for Jamaica Trinnaman to create Hello! Bulk Markets. Through single motherhood, financial woes, breakups and demanding jobs, Trinnaman developed a package-free bulk market that carries more than 300 products, now located in the Guadalupe District of Salt Lake City.

“The idea first came to me when I was working for Wild Oats Markets, which was a grocery company that was bought out by Whole Foods while I worked for it,” Trinnaman says. “That’s where I first started shopping the bulk department and seeing the beauty of bulk. I was just loving how I didn’t have to purchase the packaging and could get what I wanted, and I could get a little or a lot. It would just minimize the amount of food waste I had.”

After 15 years, Trinnaman had filled a number of grocery-related roles, including as a grocery broker, which would later come in hand as she began sourcing for her own store. Eventually, she found herself working at Rancho Markets. “I saw the grocery industry from a whole new angle,” Trinnaman says. “I was suddenly with this female-owned company, and [Eli Madrigal] does things the way she wants to do things.”

When Trinnaman nervously let Madrigal know that she would need to taper down her hours to part-time in order to start her own company, Madrigal offered her support. “She gave me a raise and she said, ‘Even a few hours a week will help so much because they’re steady, and you need that money.’”

“I was just loving how I didn’t have to purchase the packaging and could get what I wanted, and I could get a little or a lot.”

Over time, Trinnaman says it wasn’t serving either party, but those few hours a week that were previously dedicated to working at Rancho suddenly filled up with meetings, orders and time devoted to her bulk-market concept. “Seeing that stores like this were popping up in the U.S. now, I always just felt like, ‘I’ve got to do this.’ I’m the right person to do this.”

Trinnaman applied for an incubator cohort called Sustainable Startups, in which blossoming business owners are given the help they need to take an idea for a sustainable business and make it a reality. Sustainable Startups helped Trinnaman set goals, meet accountability partners and create projections that started to make things feel real for her. In May of 2018, the first iteration of Hello! Bulk Markets began in the back part of Square Kitchen. This iteration was popular, but Trinnaman says it wasn’t giving her the kind of traction she needed to show investors that she could support a location.

To improve community buy-in, Trinnaman took advantage of the market’s significant social media following and created a Kickstarter campaign in July 2018 to raise funds for a storefront. The campaign reached $15,000, exceeding the initial goal of $13,000. Trinnaman used the Kickstarer as a way to raise funds, of course, but also to create a network of people who were invested in supporting her.

“I think that Hello! Bulk offers a lot to the food scene as far as just being able to shop for goods package-free.”

It was through visibility from the Kickstarter campaign and a serendipitous wine-club encounter that Trinnaman met Chris Parker, the founder of Giv Group. Parker let her know that a grocery storefront space was needing to be filled in one of their Project Open buildings. The building holds 112 units and reserves 81 of those units for residents earning at or below 50-percent area median income. In a series of conversations over the course of two months, she built the partnership that helped her create what is now the first permanent location of Hello! Bulk Markets. “This partnership has allowed me to be subsidized in some ways,” she says, “and we’re doing a joint effort to subsidize a discount for the affordable housing tenants, too.”

The market opened in February 2019 and has already had a mutually beneficial relationship with the greater Salt Lake community. Because grocery-sourcing minimums can sometimes be alienating for certain restaurants or entrepreneurs, Hello! Bulk has also developed a business-to-business arm, which helps to distribute to local vegan restaurant Mark of the Beastro and a local, gluten-free, grain-free, certified organic baker.

“The word is spreading about how we are acting as a distributor, and we really want to grow that, too,” says Trinnaman. “I think that Hello! Bulk offers a lot to the food scene as far as just being able to shop for goods package-free. I’m a foodie, so I offer more organic and natural [products] than most bulk-food sections. But I also see that we have a lot of power in funneling quality grocery through these restaurants and organizations like some of these food entrepreneurs. These are all organizations who don’t have time to always know what’s available, especially restaurants. They don’t have time to analyze all of their sourcing, and that’s where we can be helpful because we’re constantly doing the homework.”

“[Local restaurants] don’t have time to analyze all of their sourcing, and that’s where we can be helpful because we’re constantly doing the homework.”

Along with a staff of three other employees, Trinnaman has plans to continue growing and expanding the store’s offerings, including to-go prepared components for meals that she hopes will combat some of the waste associated with popular boxed-meal kits.

Trinnaman cites a reduction in packaging and plastic waste, good value and increased freshness as just some of the reasons to buy in bulk. Hello! Bulk holds regular workshops focused on sustainability, as well as informational potlucks on topics like transitioning to a zero-waste home.

A second phase of the Project Open building is currently under construction next door, and Hello! Bulk will relocate to a larger storefront in that building once it’s complete. Trinnaman says that while the existing location will remain her flagship store, she is looking into expansion to a second storefront either in partnership with investors or through franchising.

Hello! Bulk Markets is located at 355 N. 500 West and can be found online at hellobulkmarkets.com.