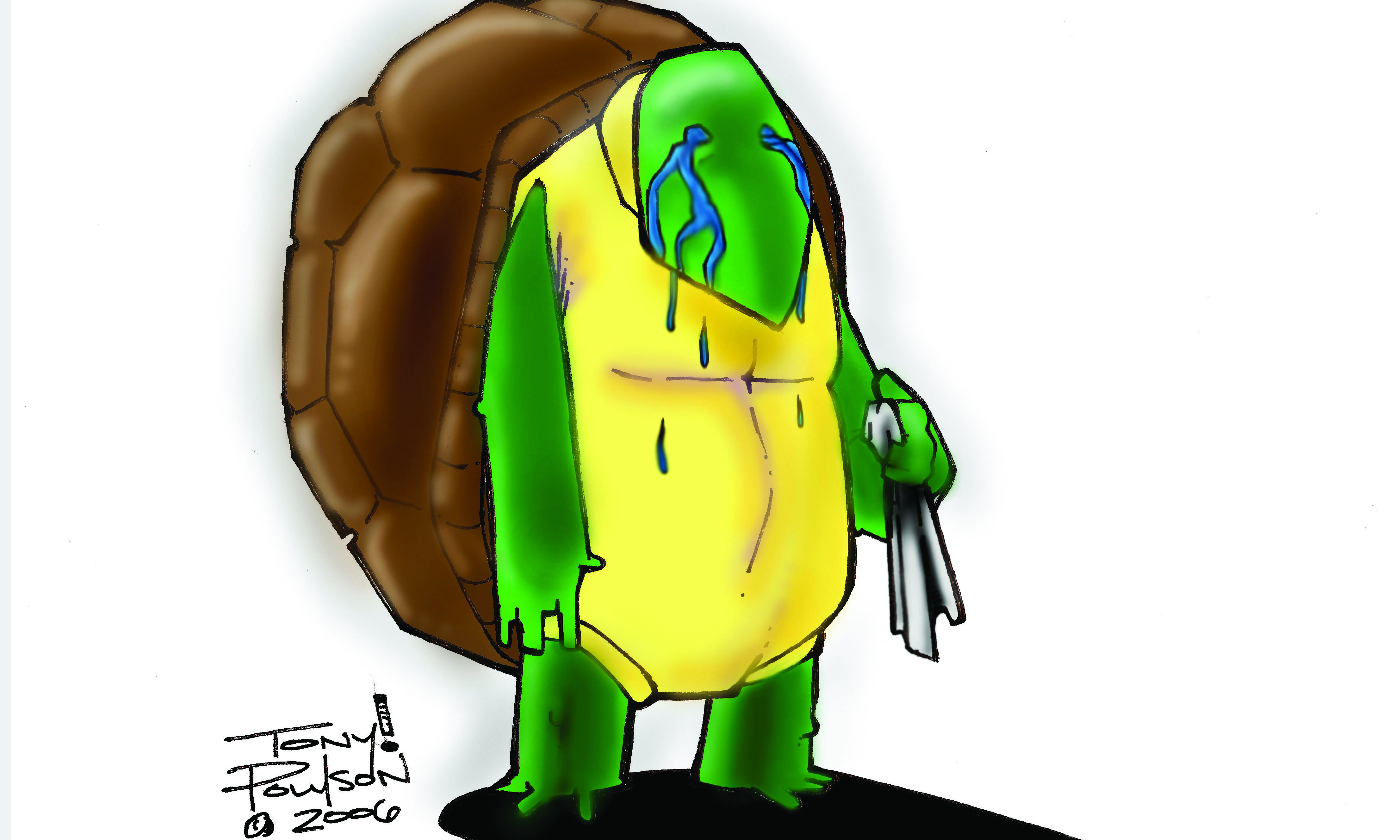 The following is a list of animals that I’m not allowed to own as long as my girlfriend and I live together:

Ferrets
Skunks (stink box removed or otherwise)
Lizards or snakes of any kind
Fish, salt or freshwater (even though I consider aquariums household decorations and not pets)
Dogs of any kind (unless they are black, fat, can climb a tree and are called “cats” by most people)
Frogs or any other amphibians
Gerbils, hamsters, and other small rodents
No birds, no way (this one I agree with)
Squirrels, jackelopes, bears, giraffes, or any other zoo-like animal incapable of domestication
Turtles

Everything that’s in bold is an animal that I have owned and cared for in my lifetime, and one that I am confident that I could still care for. Ironically, my girl gave me the green light to own a tarantula or scorpion, but that’s because she knows that I’m afraid of both of those creatures. So when it comes down to it, the only animal I’m allowed to have is a cat.

Don’t think for a second that I’m complaining. I now like cats even though I didn’t when I was a kid. And I once had to break up with a girl because she had pet ferrets that she liked more than me. She also had a bad crystal-meth habit, which seems to be a reoccurring theme with my exes.

The only animal I’m really sad about not being able to own these days is the turtle. I think turtles make the best pets ever! Sure, a Red Ear Slider might require a somewhat smelly aquarium to flourish in, but an Eastern Box turtle is a relatively low-maintenance animal, and they’re so cute! Turtles, as we all know from watching cartoons, are exceptionally smart. What other animal can you think of that is so prepared that it carries its entire house with it everywhere it goes? They are the RVs of the animal kingdom!

When I was a youth, my big Mormon family and I drove out to a family reunion on my dad’s side to the wonderful “Show Me” state of Missouri. Or if you’re from Missouri like my dad, it’s pronounced miz-UR-aa. Missouri is best known for that big fucking arch, Branson (which is just like Las Vegas minus prostitution, gambling or anything fun) and amazing stores like Bass Pro, the world’s largest specialty fishing store. Before Wal-Mart destroyed the rest of the country’s economy, it spent a lot of time brainwashing Missourians into full allegiance. So much so that one of my cousins on my dad’s side of the family got married in the Wal-Mart aisle where he met his wife. He died a year later from a tobacco overdose.

Missouri is also home to many different breeds of turtles. I could have cared less about meeting relatives I didn’t know that I had. On this trip, all I wanted to do was catch turtles. And that’s exactly what I did!

I caught around 10 or so turtles and convinced my parents to let me take them home with us. I rode in the back of our big Mormon van with them, making sure that all the turtles got along and weren’t too bored on the drive home.

When we got back to Salt Lake, I hustled the turtles to all the local neighborhood kids, five bucks a box turtle! Well below wholesale price! Since I was my own distributor on this deal, I made a nice chunk of change for an eight-year-old!

I kept the best-looking turtle to myself and named him Myrtle the Turtle. My dad and I decided that the best way to keep a-hold of Myrtle was to drill a hole in the back of his shell and tie him to a tree in the back yard. So this is what we did. Now before any of you animal-friendly types get upset, this is a common practice in Missouri; it’s just like shoeing a horse and how else was I supposed to take Myrtle on walks?

After a couple of months of Myrtle living in my back yard, I went to say hello to him and feed him his dog food, you really can feed turtles dog food, they love it, Myrtle was gone! Someone had stolen my turtle! I had no idea who did it, since all of the kids who really wanted turtles had already bought them from me.

Then a couple months later, something shitty happened. A video store called Video Vern’s had just opened and it was unlike any other video rental place at the time. This was before Blockbuster really caught on and Video Vern’s was huge! They even had a pet section with live pets in a video store. Anyway, while meandering through the pets section, I stumbled upon an Eastern box turtle that looked just like Myrtle. Upon taking a closer look, I noticed a hole in the back of the shell!

It was obvious someone had stolen Myrtle from me and sold him to Video Vern’s for what I describe as a “blood profit,” just like slavery. I begged my dad to talk to management to get my turtle back. He tried to convince me that it was very unlikely that it was Myrtle I saw, but I know what I saw!

To this day, I have no idea who stole my turtle, but may he burn in hell if there is one. And fuck you, Video Vern’s! You guys were just like the South back in the day, willing to participate in slavery and now out of business!