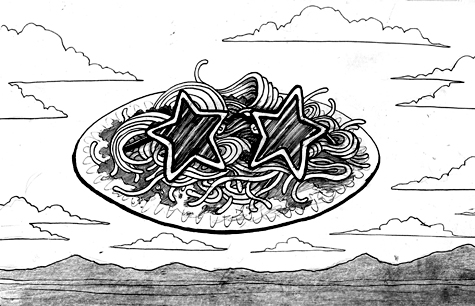 Boo became obsessed with the idea of interviewing Alfredo, Aunt Leona’s spirit guide who appears to her as a messy plate of spaghetti marinara.

Boo ran the idea past Leona who said she’d ask Alfredo if he’d be willing to be interviewed.  The three of us were sitting in Boo’s bedroom at the time, and Aunt Leona crawled over to Boo’s closet saying, “I’ll just meditate for a minute and open up a channel of communication with him.  Oh, he’s gonna love this.  Eww, when did you last run a vacuum over this manky shag, Boo?  I’m a delicate blossom, you know.  Eww!”  Boo turned to me in panic and whispered, “I didn’t mean right now!  I haven’t prepared any questions.  What if…”  She was cut off by loud Leona giggling coming from the closet.  The giggling continued for several seconds and then Leona emerged saying, “He says he’ll do it, giggle, and he’s wearing sparkly, star-shaped sunglasses, giggle giggle giggle.” Boo protested, “Aunt Leona, we aren’t ready.  We need to get some questions together first.”

“Oh no problem, just, ya know, shoot from the hip.  Alfredo’s totally into it. Hey Boo, I’m gonna raid your candy dish,” Leona said as she wriggled her red press-ons through Boo’s candy. She giggled and watched the movement of something unseen to Boo and I glide from the closet to the prayer mat Boo had set in front of her shrine to early Hollywood starlets who went bonkers or met untimely ends.

“What?  Are the sunglasses just stuck into the spaghetti?  Tell him not to get sauce on the prayer mat,” Boo requested. “Yeah.  It’s sooo cute.  He never leaks.  Hey, why are there Es printed on these M&Ms?” asked Leona. “Turn it a half turn,” Boo said. “Oohhh, W.  Why W?” Leona asked. Boo just growled and flopped down onto the bed.  Leona looked up towards Boo, then to me, then to the prayer mat and back to Boo. “Well, go on, ask him some questions,” she said.

Boo looked stuck so I started in. “Hi, Alfredo.  How did you become a spirit guide and why did you choose Leona?” I stared at the prayer mat waiting for it to reply.  Instead, I heard  Leona squeal delightedly and say, “That’s so sweet!”  I turned to Leona who continued, “He says he was sought out and recruited like a special agent or a star athlete and that he needed a beautiful and glamorous side-kick.  When he saw me on the shopping channel, he knew I was the one.  He set things in motion so that I would eventually summon him to me.”

Leona turned back toward the prayer mat and cootchie-cooed, “I’m so glad you did, too, you dangerous dish of dishy carbohydrate.”

Boo let out a disgusted groan and mumbled, “I don’t know if I’m so into this anymore.”  She then faced the prayer mat and asked, “Why do you appear as spaghetti?  And why messy spaghetti?”

After a moment of silence, Leona said, “It’s because it’s so outside my sensibilities.  It keeps me a bit, ya know, on edge.”

Boo got agitated and demanded, “Does this mean there’s an afterlife?  Is there a God, and if so, does it really love retarded people more than it loves other people?  What’s the meaning of life?  Why are religious people so often horrible?  Why is there so much pain in the world?  Is there a heaven and a hell?  Are we all just crazy?  Is there a point?”

Boo whipped her head around to face Leona for the answer.  Leona had an unusually serious look on her face, and after a silent moment of looking at the prayer mat she answered, “He says that’s for him to know and for you to find out.  He also says, ‘NYA NYA NYA!’”

“Wrong answer!”  Boo leapt up from the bed, grabbed the prayer mat and flung it across the room.