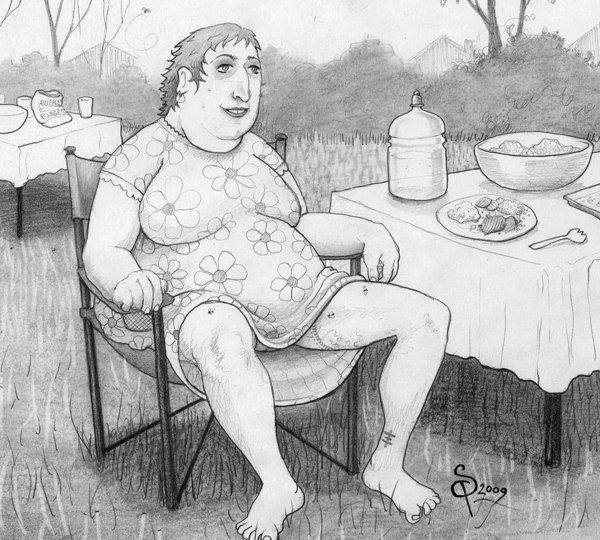 Our first encounter with Polka Leviathan was monumental. Physically, she is a larger woman, but her presence is enormous. Boo and I had been arm-twisted into attending a Christian youth pep rally organized by Cumorah Hill DeGarde and her brigade of busy bodies. The event was billed generically as “Christian” for a broader appeal, but under Cumorah’s command, the afternoon was a wholly LDS experience. It was held at Liberty Park and was sparsely attended. An “inspirational musical guest” was performing with both an acoustic guitar and the vocal mic run through delay pedals and then out through a distorted amp and a crackling PA system. At the end of every verse, the singing guy would draw out the last word with a dramatic “AAAAAAAAAWH!” which would echo to seriously cheap effect. Predictably, there was a large picnic table entirely covered in refreshments. At one end of the table and sitting in a lawn chair that was so deluxe it could easily have been mistaken for a LA-Z-LOUNGE recliner was an ample woman wearing a bright floral muumuu with her hair cropped short.  She was reclining back a bit and had her legs spread widely apart so that the muumuu was bunched up enough to almost reveal undergarments––whatever they may be. As Boo and I neared the proceedings, this strange woman called out to us saying, “Ahhhh, this must be Katherine’s legendary niece and nephew. You two report to me immediately.” If anybody else had commanded us in such a way, they would have faced the legendary and lethal wrath of Boo, but the sly glint in this woman’s eye diffused Boo’s trigger mechanism and we obediently stood ourselves directly in front of the mega-chair. The woman looked us over and nodded approval saying, “I’m Sister Leviathan: Polka Leviathan. Your sweet Aunt Katherine tells me you have a band––a band that makes SUBVERSIVVVVE music, even.”

At this point, the singing man let out one of his dramatic AAAAAAWHs and Polka let out a deep, rolling chuckle. She then looked at me and asked, “What’s the name of your band? What sort of music do you make?”

I naturally assumed that Polka Leviathan wouldn’t have a clue about most of the music we listened to and I adopted a patronizing and slightly elitist attitude when I replied, “We are called The Weeping Giblets and we’re very influenced by early British and German noise artists, bands you wouldn’t have heard of, Throbbing Gristle, Einsturzende Neubauten, Psychic TV, Zoviet France, people like that.”

Polka chuckled again while keeping eye contact, the glint in her eye flaring up and a grin spreading across her face.  Cumorah suddenly appeared like a wraith next to me and in a loud and appalled whisper, spat out, “Sister Leviathan, you MUST modify your posture!  It is indecent!”

Polka looked down at her wide open lap and then up to Cumorah.  There was a pause and then Polka replied in the sweetest of tones, “But Cumorah dear, I’m keeping the flies off the food.” With that she motioned to the table of refreshments and roared with a hurricane force laugh that lasted forever. Cumorah stared blankly for a moment as she processed what was just said. When she finally grasped Polka’s meaning, she screeched out, “OH VILE!” and slithered away.

After that, I was mortified to learn that not only did Polka know who Throbbing Gristle was, she knew them personally.  It turns out that in her teens, Polka had run away to London, England––at the prompting of our equally independent and adventurous Aunt Delila. While in London, Polka became very involved in the underground music and art scenes and was active in the early British punk explosion. She even helped run Throbbing Gristle’s own record label, Industrial Records.

Lucky for me, Polka is not a nasty mean person and only chided me good naturedly for my dismissive attitude. Boo, on the other hand, will never let me live it down and takes great pleasure in singing out, “bands you wouldn’t have heard of” at every opportunity.