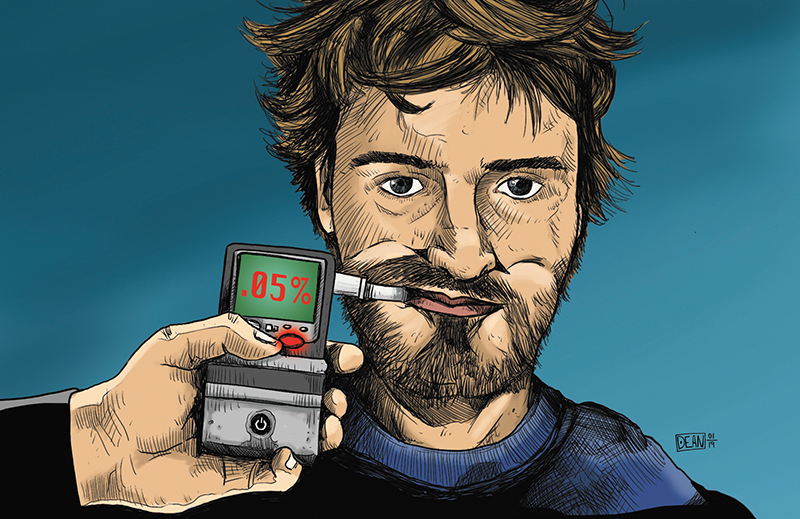 As of Dec. 30, 2018, the great and wholesome state in which we reside has updated its DUI policy, lowering the legal limit from .08 to .05. Keep in mind, that for this article, I am by no means a legal expert, nor shall I pretend to be. I did, however, grow up with a lawyer dad, which meant that when I got in trouble as a teen—which was quite frequent—I was rarely grounded and never beaten. I’d get litigated. At the time, I felt that being litigated was worse. I’m not saying that you should beat your kids, but when you’re on the wrong side of a deposition with your dad over breaking curfew, sometimes I’d just want him to spank me and get the punishment over with.

Either way, this new DUI thingie has some people freaking out. Some people are wondering if they can even go out and drink and will just have to get boozed up in the comfy confines of their living room in front of the TV, like I usually do.

Let me quickly go over what .05 means, in case you live in a cave. When you get pulled over and a cop suspects you of drinking, they give you all the fun tests then finally whip out the breathalyzer for you to blow into to measure your blood-alcohol content. It’s a simple percentage that can determine whether or not you are legally or illegally intoxicated.

Lots of factors can determine what percentage the breathalyzer comes up with, like how much you’ve eaten, how much sperm is in your system, how much fat content you have or if you’re male or female. But the simplest ratio is determined by body weight. So according to the Department of Alcohol and Beverage Control, one drink can legally intoxicate a woman weighing 110 pounds, thus putting your BAC at .05.

Now that we have some of the facts, let me go over my humble and wet opinion on this matter. I don’t think this new law changes shit. Like I said about Prohibition, laws don’t change what people want to do. And the fact of the matter is that even before this law, you could still get a DUI if you blew under .08. The police could determine that you were an endangerment on the road. Like, if you were swerving like a motherfucker but only blew a .03, let’s say, or your Valium kicks in on the way back from your kid’s soccer game, you could still get charged with a DUI.

I feel like this law was put into place due to the upswing in ride-sharing via Uber and Lyft. I don’t think it’s a moral argument like other issues with our stupid legislature, but a financial one. Salt Lake’s public transit sucks, and our taxicab companies have always sucked. I remember bartending years ago and having to tell customers from out of town that it would be at least an hour for them to get a cab back to their hotel. So think of all the money the state has lost out on per lack of DUIs due to the fact that ride-sharing is so available. (Although, getting a creepy Uber driver may sometimes make you wish you just drove home drunk.) [Editor’s Note: DON’T.]

I feel like it falls into the same category of why you don’t have to get a safety inspection on your car anymore in this state. It ups the chances of getting pulled over because you forgot your tail light was out, thus upping revenue for the state. This also means that there will probably be more DUI checkpoints because of the new .05 law. But if you get a DUI at a checkpoint, you’re a real dumbass, and here’s why. First off, you shouldn’t be driving drunk. Second off, the police have to post in the news when and where they are running the checkpoints. And third, it’s pretty easy to tell when you are rolling up on a checkpoint—just hang a right and go back to that shitty house party.

So yeah, the real losers of this new law aren’t us power-drinkers or bar patrons. Like I said, we’re gonna get drunk anyway. The real loser is the department of tourism. That’s money that could be brought in from tourists—who would rather go ski in Colorado where they can puff tuff and not have a weird perception of our alcohol laws even though our resorts are closer to Downtown and our snow is better.

I guess the last question that I don’t have the answer to is what’s going to generate more money for the state? Lack of tourism or money from .05 DUIs and busted tail lights? Only time will tell in another great and strange chapter from the Land of Zion. – Mike Brown