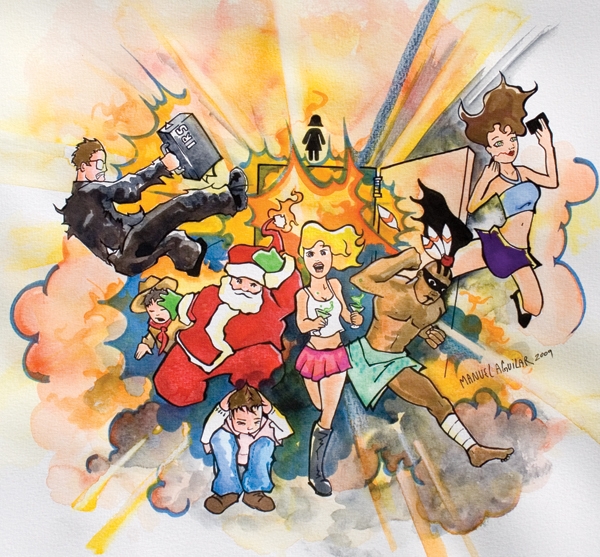 It’s Christmas time. Religion and capitalism blend together to increase the suicide rate while children make snowmen. Such a special time. But for some reason, the holiday season reminds me the most of one thing. I don’t know exactly why, but I always think about the end of the world at this time of year.

Ah, the apocalypse. As if I didn’t have enough shit to worry about. I have no clean underwear at the moment and I can’t find any quarters to do laundry. You think the apocalypse is a problem? Try riding your bike freeballing in this winter wonderland. If I can do that, well then I fear nothing.

Truth be told, the apocalypse used to scare the stool right out of me. I dropped out of college thinking there’s no point in higher education if the whole planet is just gonna turn to dust. So far I think it was a good decision.

Once I solidified my spiritual views as not spiritual at all, I decided that you couldn’t really claim Atheism and believe in the end of the world because god or some stupid Mayan Calendar or Nostradamus said so. None of them have been right so far, so what’s gonna make 2012 any different?

So since the end of the world doesn’t scare me anymore, here are some other things that do.

This whole Ed Hardy/Affliction thing: Seriously, I never thought I would miss the fohawked metrosexual, what happened to that guy? Now you got jocks named Chad and Skyler showing off their steroid infested arms in tight shirts that look like a six-year-old bedazzled the shit out of it.

If these Douche-knobbers are gonna dress like Brett Michaels, I think they should take it all the way and rock the wig with the shitty cowboy hat. And fuck it, why stop there? Go for the botox and calf implants to boot. I met Brett Michaels once, he was really nice, but his face was so puffy from botox it looked like his face was ready to explode.

You could use this fashion trend as a sign that the apocalypse really is coming, but if you are more like me, then this whole thing makes you feel that the end of the world couldn’t come soon enough.

The Girls Bathroom at Urban Lounge: I won’t spend too much time complaining about this seeing how I wrote a whole article on it once, but at the end of every night the bar has its own apocalypse in the girls’ bathroom, and I have to clean it. All I want to say is, seriously, what the fuck are you bitches doing in there? I guarantee the real apocalypse will have just as much blood and shit everywhere per capita for the survivors to clean up as I have to on a nightly basis.

The Dentist: My grill is fucked. If I could just time my next dental appointment with 2012, I think I should be ok not flossing for about two more years. I went without a cigarette for over two years once, so I bet I can go without a jolly rancher for the same amount of time. I should be good.

Taxes: I’m kind of debating this one, but really, if the world is going to end so soon then why should I pay my taxes? I’m not really afraid to do this, more just reluctant as fuck. Maybe I should just start a list right now of shit I’m going to put off until 2012. Taxes are at the top. Kind of the same reason I dropped out of college.

I personally would prefer to blow up with the rest of humanity and consider my life a good run. I kind of feel like I don’t have much choice. If I have to live off the land, I’m fucked. I can’t cook worth shit. I can barely open a can of soup and only have three spoons and two plates in my personal china and silverware collection right now.

I still don’t own a gun, and I have no idea where the nearest bunker is. So if the apocalypse really does hit in my lifetime, I’m totally doing a bunch of drugs I swore to myself that I’d never do. Chasing the dragon while the A-bomb drops seems to be the way to go.

So I’m preparing by not preparing at all. Which is weird because I was a really good boy scout, and the Boy Scouts of America’s motto is ‘Be Prepared.’ I’m a personal finance merit badge away from having my eagle, but then I started doing drugs and being an eagle scout would have hurt my punk rock image at the time.

I figure as long as I just keep my name on the Mormon Churches records I should be good. Sure, I have to occasionally tell the missionaries to fuck off, but if the apocalypse really does happen, there’s a good chance I’ll land in a Mormon bunker. They’d have to take me in, right?