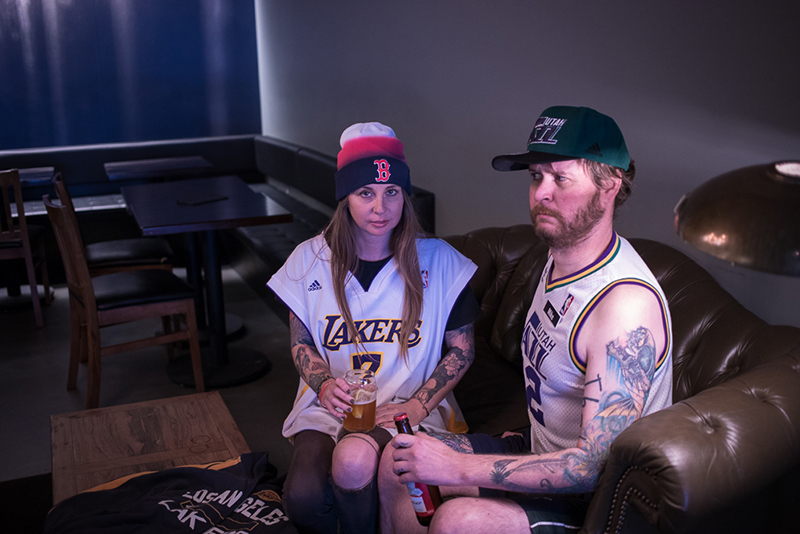 For this month’s installment of another booze-themed issue of SLUG Magazine, I thought I’d write a little bit about barroom etiquette, but not from a bartender’s perspective. Quite frankly, that topic is severely played out, and it’s pretty easy to keep a bartender happy. Just tip them a bunch of money—end of story. Bartenders that have pet peeves about anything else are probably pretty new to the trade or they are really shitty at putting liquid in a glass, which is essentially all a bartender does.

Instead, I’d like to tackle the topic of barroom etiquette from the perspective of the customers. We’ve all been in a public place like a bar in these scenarios, and have witnessed “That Guy,” the person you feel an awkward embarrassment for because their booze-brain is incapable of feelings of chagrin for themselves. I, myself, witness That Guy almost every weekend while working behind the bar. In order to help my customers, I’d like to try to help you not be That Guy.

The thing with That Guy is that we all have been That Guy at one time or another in our lives. I’ve had to apologize more than once in my meager existence for realizing that I was That Guy the night before. I’ve kicked myself out of more bars than I’ve actually gotten kicked out of upon realizing that my That Guy threshold was about to be broken. It’s a terrible part of life, and if I can save just one person from being That Guy for a night, well then, I can rest my cranium easy on my pillow.

One thing with That Guy is that they usually walk into a bar not being That Guy. For some, it might take 12 shots to release the That Guy demon; for others, it may only take two. Although, there always will be a special breed of douchebaggery that have their That Guy switch flipped on 24/7. There’s nothing we can do to save those humans—unfortunately, being That Guy is not a capital offense.

But there are some red flags we can all watch out for in anticipation of someone going from zero to That Guy in 4.5 drinks. That would be drink selection. If you are sitting at the bar and random orders any of the following, run: shots of Fireball, Jaeger bombs, Long Island iced teas, AMFs, any beer with fruit in it or shots of Jameson whisky but he calls it Jame-O. There’s a high probability that he will be That Guy in no time.

That Guy will also try to get you to buy him some of the aforementioned drinks. Classic That Guy move. If you have to ask someone to buy your drink, then you are being That Guy—and you don’t deserve one, in my opinion. I reserve the right only to buy drinks for close friends, people I lost a bet to, intelligent strangers who can hold a good conversation at the bar or people I’d like to cuddle with later.

One thing I’ve noticed at the bar I work at, in particular, is that That Guy likes to go on a lot of Tinder dates. So many Tinder dates go down at my work—usually on a weeknight, which is probably a good idea because if shit goes south, you can bail easily by saying you gotta work in the morning. I call these days Tinder Tuesdays. And whenever I see a That Guy, if he’s on a Tinder date, they usually say, “Fuck no! We met on Bumble!” which is basically the same as saying you use Bing! instead of Google. They are all Tinder dates, buddy.

Usually, That Guy will get to the bar before his Tinder date does and pound three or four shots in a row. The girl will usually take it easy and casually, and sip some sauvignon blanc. Watching the drinking habits of this 21st-century mating ritual is fascinating. A tip for not being That Guy on your Tinder date: Let her set the pace for the booze-intake race. I understand trying to take the edge off, but if you are that nervous meeting strangers off the internet, then maybe you shouldn’t.

I’ve had the privilege of seeing numerous Tinder dates go down like the Hindenburg while at work. Honestly, it’s the best part of my job—and the only good thing about That Guy. But sometimes the Tinder bender goes well for a couple, and sometimes that leads to making out and heavy petting in the bar. And guess what? If you are making out and groping someone in the bar, you are being That Guy. People don’t like public displays of affection, not because it’s gross—because it’s not—but because we’re jealous. I’m all for breastfeeding in public, just not when the baby is a 41-year-old That Guy.

It’s fair to say that That Guy can also be That Girl or That Person, too. The behavior is basically the exact same. Annoying is annoying, regardless of gender or orientation. So remember, folks: The next time you go out, please, please, please, don’t be That Guy.