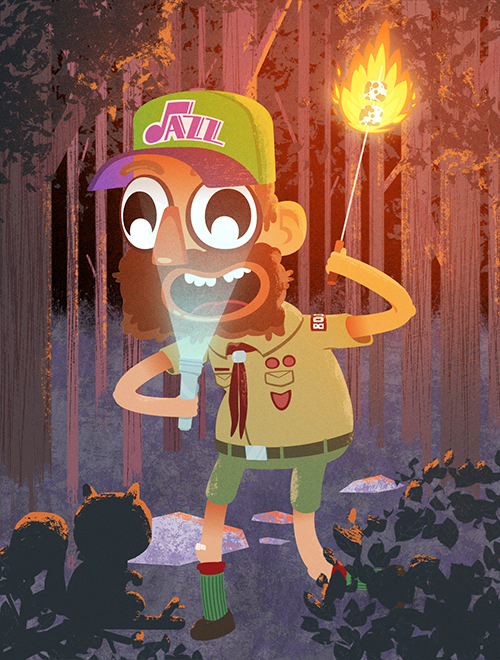 Mike Brown is surprised that he and his troop never experienced a single death during his time as a scout. So are we. Illustration: Spencer Holt

I grew up in a conservative Mormon Neighborhood in Salt Lake City, which was basically all of Salt Lake City. One of the obligations of a Mormon upbringing in this neighborhood, or ward, as the Mormons (and prison wardens) call it, was participating in the Boy Scouts of America program in my early teens. The Church and the Scouts were intertwined back then with hopes of grooming fine young men such as me with extracurricular activities to prepare us for Mormon missions or whatever other shitty fat lie ahead of us.

For whatever reasons, the Mormon Church, starting this year, is disassociating themselves from the Boy Scouts of America. I’m sure that it has absolutely nothing to do with the Boy Scouts announcing a few years ago that they would accept gay scouts into the pack or that they would allow trans kids to participate in canoeing and boondoggling with them this year. Right? That couldn’t be it.

All joking aside, I actually had a really positive experience with the Boy Scouts in my early teens. For whatever reason, really great men, Mormon and non-Mormon, would graciously sacrifice their time to take a bunch of hormone-infused shitheads camping once a month and not molest us. It was an era in my life where, without realizing it, I genuinely needed a positive male role model. And aside from earning merit badges, these men were there to teach me some basic life lessons, like don’t pee into the wind and proper knot tying, which can come in handy in one’s adult sex life.

Any time I come across a sad news headline about a boy scout who died while camping, I must admit that before I feel sadness, I feel surprised. I’m not surprised that the scout died in a hiking accident or whatnot, but surprised that no one from my troop, Troop 750 from the Holladay North 24th Ward, ever died on any of our expeditions into the wild. Like, I’m seriously baffled by it. We were so purposefully reckless when it came to wilderness survival. Our troop leaders weren’t just battling the perils of nature; they were battling good old-fashioned juvenile stupidity.

There was the time a fellow scout wanted to see what would happen if he threw a can of aerosol hairspray into the fire. First off, I don’t know why this scout had hairspray with him on a camping trip, but in case you were wondering, a full can of hairspray in a campfire explodes—really loudly—and gets flaming ashes all over your scout leader’s tent. This gets the attention of the park rangers and ruins all the tinfoil dinners. But it does scare away bears, so it’s actually not completely stupid.

My parents paid for me to go on this trip, and the troop comprised of kids from other troops around Salt Lake, and we had different troop leaders. These troop leaders were Catholic, but surprisingly, still no molestation. The trip didn’t just include the Jamboree in Virginia. We flew out to the East Coast a week before the Jamboree and took a tour from New York City down the East Coast, seeing a bunch of historical sights.

We actually did some culturally significant things that 14-year-old me couldn’t really appreciate at the time—shit like seeing the Statue of Liberty and eating lunch on top of the World Trade Center in the Big Apple. We saw the Liberty Bell in Philadelphia and all of the monuments and historical boring shit Washington D.C. has to offer, including the Constitution that no one seems to care about anymore.

The fireworks show at the Jamboree, the reverence of the Vietnam Memorial, the wonder of the Statue of Liberty—none of those things compared to the cleavage of the Hooters waitress in the simple mind of a 14-year-old boy scout. Hiding the boners in our tiny scout shorts was nearly impossible. And when we returned home, much to the chagrin of our scoutmasters, all any of the scouts could talk about with their parents was how amazing Hooters was.