Do you know what busking is? If you are a regular to reading my column, I’m guessing you are too drunk or lazy to Google it, so allow me to do that for you. According to the app on my robot phone, to busk is to entertain by dancing, singing or reciting on the street or in a public place. It’s a goddamn street performance. 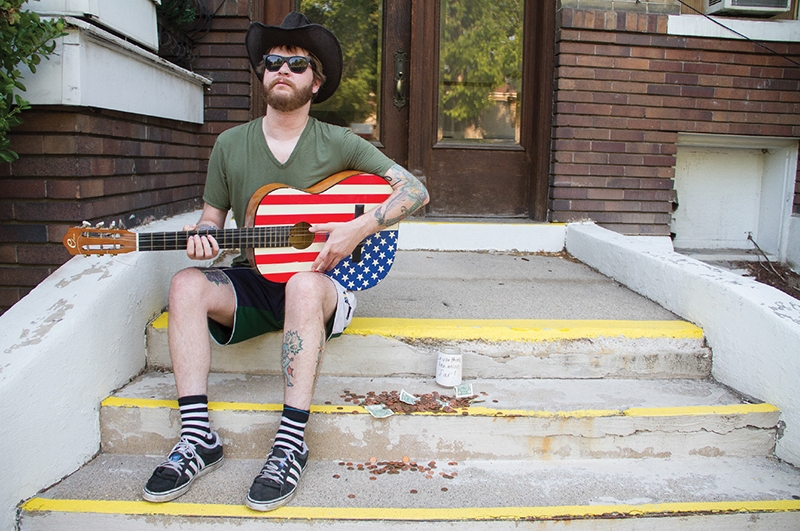 I decided to hit the not-so-vibrant streets of Salt Lake and do a quick interview with a seasoned busker. Even that proved to be a bit daunting. I didn’t want to show up at the Farmers Market, where busking is totally legal. This is SaltLakeUnderGround, folks. So, I wanted the nitty-gritty, DIY, semi-gutter, punk busker, if there is such a thing, telling me stories of getting robbed and trying to scrounge up enough change to throw his dog a biscuit.

I thought about interviewing the bagpiper who blows himself on 200 South. If anything, an interview with him would get him to stop his terrible toots for a few minutes, probably making him more money from people who would tip him just for stopping. But, alas, his fair Scottish skin wasn’t cut out for this heat wave, so on to Plan B.

Plan B was to interview a mime, just to make my assignment easier, but finding a mime in SLC is like trying to find someone who’s been laid more than once at a Star Trek convention. And the only solid question I could come up with was, “Hey, Mime, how long have you been trapped in that box?” (Mime pretends not to hear me, then flips me off.)

I randomly found the perfect subject while driving down 500 South. There was a busker with his girlfriend playing out-of-tune songs on a cheap acoustic guitar on the corner of the parking lot entrance to the Smith’s Marketplace. My first thought was that this is a terrible place to busk. With seemingly no one giving a shit about what he was doing, I pulled over to ask him a few questions.

His name was Randy, and I explained to him what I was writing about. I tossed him a dollar and told him that I didn’t want to take up too much of his time, because time is money, people, especially if you are a busker. I skipped the boring “How long have you been doing this?” questions and started off by asking why he picked such a seemingly bad spot.

Randy informed me that he wasn’t from the City of Salt, nor the State of Deseret, and that he and his girlfriend were road tripping and on their way home to Portland. It made sense, seeing how we were close to the freeway. He said that if you don’t know a city too well, grocery stores are always a safe bet to busk. You know the people going in and out have some money and, who knows, someone might even buy you a tall boy or some groceries.

He liked busking because you can do it anywhere, at least until you get kicked out of a spot. He preferred to play his own songs on his own terms, as opposed to busking an arts festival where it’s encouraged, but you also have to register and pay an entrance fee—kind of like skating a legit illegal street spot as opposed to pushing around the skate park.

Randy also mentioned that it was a great way to get gas money on any road trip, which instantly had me thinking about every tour I’ve been on where everyone in the band is complaining about pitching in on gas. Why the fuck didn’t we just pull over and busk a nut?

On top of that, it’s a great way to get some practice time in if you are in a band like Randy is back in his home of Portland—killing two birds with one stone. That’s how I feel when my band, The Fucktards, plays shows at Burt’s Tiki Lounge. There are usually about five people there and, instead of promoting the show, I just tell my friends I have band practice at Burt’s and they can come and watch if they want. Most of my friends these days don’t really go past 400 South unless they need to buy some drugs or something, though.

After talking with Randy for a few minutes, I bought him a beer from the store and tipped him an Abe Lincoln. I wished him luck on his journey and thought about going to the hardware store to buy some silver spray paint. I always like those dudes that make themselves look like silver robots and only move when you tip them, but I don’t think I, nor Temple Square, have the patience for that—and I wouldn’t want to get stabbed by someone who’s trying to prove to his buddies that I’m actually a statue and not a real person.