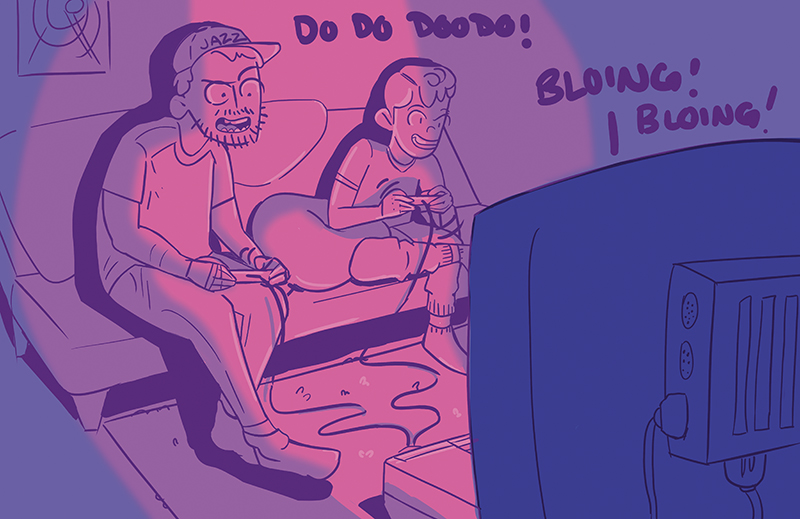 The holy Christmas spirit is so magical for many of us when we’re young and innocent. As time goes on, it seems to evaporate like cheap vape smoke from a fuccboi’s e-cig. The older we get, the further away we seem to move away from the magic that is Christmas. Chucking snowballs at cars and pretending to be good to get more presents slowly morphs into a hellish realization of the blight of capitalism on the sacred holiday and destroys us from the inside of our wallets to the inside of our hearts—completely.

We increase in age, and along with the Christmas spirit and holiday, so does seasonal depression. There are family obligations, pointless work parties, magical moments of job insecurity accompanying the thought of our Christmas bonus being botched once again—and so on. The magic of Christmas just doesn’t have the same glow as we become adults by definition of age.

To be honest, I’ve been jaded about a lot of things for a while (big shocker), but I wanted to get back in touch with the Christmas spirit. This isn’t about rekindling my belief in Santa Claus or trying to milk extra presents out of the SLUG staff or my friends—though that would be nice. I just want to get back in touch with what Christmas used to mean to me when I was a kid—instead of just being a day off from work where I could get hammered by myself while laughing about how much my Mormon siblings were stressing over how much they had to spend this month on all of their kids.

I decided that the best way to do this is to interview an actual kid—something I’ve never done for SLUG, unless you count juggalos. Finding a kid to interview was actually kind of a chore. Seeing as how I don’t have any kids of my own (that I know of) and that most of my friends with kids don’t have custody over the holidays, I had to hit up the SLUG Magazine’s (self-proclaimed) Highest Ranking Mormon™, James Bennett, to see if his adorable spawn would be willing to talk to me.

When Bennett and I were neighbors Downtown a few years ago, he would walk with his kid, Atticus, past my house, and I would always respectfully hide my beer and cig and let his toddler steal toys off of my porch. His kid seems pretty cool, so I totally crashed in on a Monday evening with the hopes of a free meal and an interview Atticus—who is named after a rarely mentioned character in the B of M—about the spirit of Christmas, while fully knowing that I was interrupting family night.

Atticus was great interviewee. Like I said, I had never interviewed a kid before, so, the first question I asked was about his favorite Christmas present. He was like, “Other than something electronic?” I had to remember that I come from a different time, so I was like, “Yeah.” Turns out it’s some weird dinosaur that he still likes.

We spent most of the interview talking and debating about video games, but to me, that’s an important part of the Christmas spirit, so I’m cool with that. I then asked Atticus some basic Christmas questions, like “What is your favorite reindeer?” He said Rudolph, which I was expecting as a typical kid answer—“his nose is red, duh.” But when I asked him why, Atticus went down a rabbit hole of existential brilliance that was way beyond a 10-year-old’s perspective in my opinion.

Turns out that 10-year-old Atticus goes to a hippie school—his words (and his dad’s), not mine, which instantly cracked me up because I was able to remind him that his dad is a teacher at a public school. But this explained Atticus’ perspective on Rudolph (alongside the fact that he’s already forced into humanities classes). See, Rudolph was a loner—as Atticus explained to me, but was able to overcome that. And everyone in the room could relate to that—a deep perspective on Christmas.

Atticus also explained to me, in a complex way, why he still believes in Santa but won’t believe in him after he dies—another unique perspective, but humbling at the same time, especially coming from a kid. It kinda made me take a step back in my head and realize that the Christmas spirit is more about perspective than me just becoming older and jaded.

I personally wanted to get back in touch with what Christmas is about. Like I said, the older you get, the more Christmas sucks. Talking to a kid was a great way to get back in touch. I’ll always reflect on the scars of a brutal divorce being soothed over by parents competing to see who could provide more presents—not the worst childhood trauma in the world.

But talking to another kid is rad, realizing that Christmas is also still rad and just simple. It’s all about getting time off school, making some shit out of snow (also, Atticus has read my articles before where I’ve sworn numerous times, so I’m OK saying, “shit”), hanging out late and getting presents, and all the other rad things that come with Christmas.