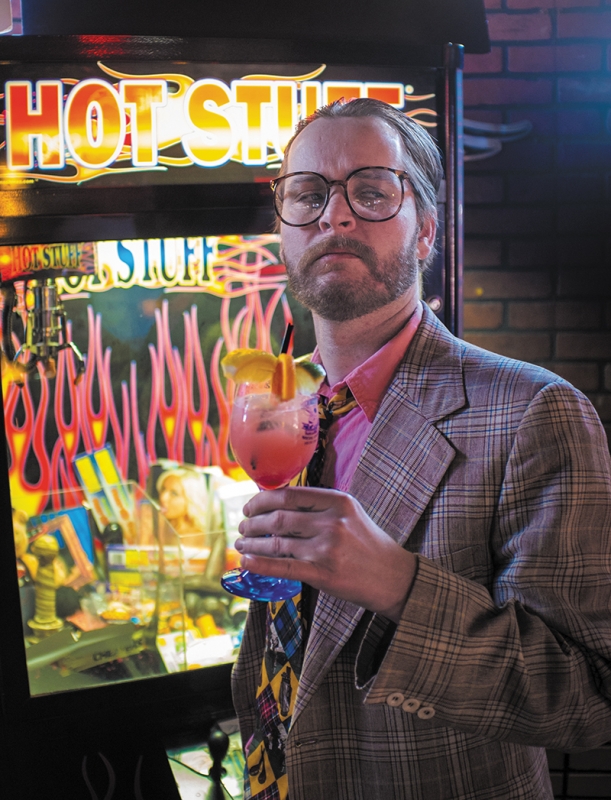 Just like guys sagging their skinny jeans, there’s a trend I’m noticing in this city that I’m not a big fan of. For all I know, it’s a trend everywhere, but since I’ve been too broke to go on vacation for a year and a half, I don’t know. It’s a trend in the local booze world, with which I am way too familiar.

It’s the craft cocktail. Bars are popping up all over featuring dim lighting, 20-dollar Hot Pockets and fancy-pants cocktails that take longer to make than to drink. These fancy, alcohol-infused concoctions remind me of dating a hot chick: They look nice, smell nice—some of them even taste nice—but they are way too expensive and will leave your wallet empty, and you’ll still be sick in the morning. So what exactly is a craft cocktail? By definition, it’s a cocktail where every element is handmade and customized to the specific drink. Customized ice cubes, customized glassware, customized syrups, customized garnishments—custom blah, blah, blah. It’s still just booze.  I can put a cherry on my poop, call it a craft poop and tell you all of the ingredients in it and how hard it was to make if I want—but it’s still just poop.

That being said, craft cocktails take too much time to get ready—again, just like dating a hot chick. I can understand having some fun with craft cocktailing—like if I was at home and trying to impress some snobs. After we finish some wine and a cheese board, I would delicately shake them the world’s best Manhattan and win them over. But ordering this shit on a Friday night in a packed bar? Please, just be respectful to the bartender and order a shot and a beer like a normal alcoholic—the other side of the bar will respect you more for it.

I realize that most of my biases against the craft cocktails are due to my own personal style of drinking—which is pretty much just taking shots of Jim Beam and drinking Budweiser as fast as possible—but this is my column, so fuck you. From a bartender’s perspective, I guess it depends on how they feel making such fancy beverages. If it’s slow and you are a booze snob, like a lot of bartenders are, I can see the enjoyment of making the perfect drink for some picky broad.

But if you think like me behind the bar, time is money. I don’t want to spend five to 10 minutes making a drink I would never put inside me unless someone else paid for it, then charge the customer 15 dollars for it and still only get tipped a dollar. Hell, there have been nights where I would tell customers our draft beers were all out just because cracking bottles was faster. My three rules of bartending are: 1) Treat everyone like a big tipper, even the ass-clowns. 2) The customer is always wrong. 3) Again, time is money, so you’ll drink what I tell you to. All three of these rules contradict your average craft cocktail connoisseur.

In fact, I don’t even refer to them as craft cocktails—I simply call them bitch drinks. The Moscow Mule is at the top of my bitch drink list these days, and even though an AMF and Long Island aren’t craft cocktails, I put these in the bitch drink category as well just based off of the jackasses that order them. Although it’s delicious, the Moscow Mule technically isn’t a craft cocktail. It’s vodka, lime juice and ginger beer.  Popular with babes with fake tits, it’s a pretty safe drink to buy a girl to impress her—mostly because it comes in a copper cup that looks fancy, and if you want to be a dick, you can steal the cup when she is done with it.

Over the years, I have invented my own craft cocktails. They aren’t very good.  There’s one I call The Lakers Fan, which is a gin and tonic with no ice and a splash of Baileys Irish Cream served hot, preferably microwaved. I try to buy this for Lakers fans every time I see them in the bar.  Then there’s the Space Docker. Skip the rest of this paragraph if you don’t want to read something really gross—OK, you’ve been warned: Space Docking is a term of a gross sexual nature, where someone shits inside of a vagina. So, the Space Docker drink I made up is supposed to mimic that. It’s a shot of Jägermeister, a shot of vodka, some Baileys Irish Cream and about a half a can of Red Bull thrown in there. The Red Bull is the key to the Space Docker as it curdles the Baileys, and since the Jägermeister is black and Baileys is brown, it looks like poop.  The Red Bull also gives it that tangy taste of a vagina—terrible I know, but that’s just how I craft cocktail.