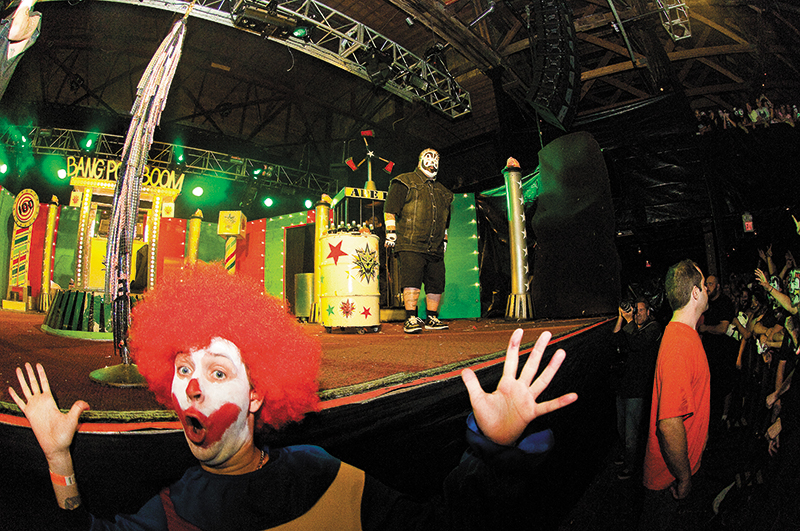 Mike Brown: Some of My Favorite SLUG Memories

Oh, precious memories. Due to massive amounts of bong rips and whiskey shots over the years, my memory pool probably isn’t as full as it should be. Good thing I like to write things down. For this month’s Anniversary Issue of SLUG, I thought it would be fun to reminisce about some of my favorite times I’ve had with the mag over the years. So I started by scrolling through all the old archives that are on SLUG’s website. Did you know that everything anyone has ever written for the entire history of the mag is on the website? I don’t know why, but that seems crazy to me. Anyone who wants to know who Brain Staker, Kevlar 7 or JR Ruppel are, or how great the “Serial Killer of the Month” column was back in the day, can find out.

There I was, meandering through the digital footprint I’ve left with the mag, trying not to step in digital dog shit, and many good times popped up. Totally the opposite from my Facebook Memories feed. But for this column, I’ll start at the beginning. Because this is my first happy memory of the mag.

People often ask me how I started writing for the mag or how they can write for the mag. I usually give them a fake phone number to call when, in reality, there is a rigorous screening process to become a staff writer. But when I was 21, I just walked into the old SLUG office, dropped off one of my zines, The Leviathan, and pitched the idea of doing a self-help column. It was basically a “Dear Abby” sort of thing but from a fucked-up kid’s perspective—which is awesome because 21-year-olds don’t know shit about life. I typed up an article on a floppy disk (remember those?) and told Angela H. Brown, who had just bought the mag, “Print this, if you want,” thinking SLUG wouldn’t run it. Lo and behold, on the first Friday of the next month, my first published piece of writing ran in the mag. I believe it was a piece about a kid who made love to a grapefruit and got caught. Thus started my SLUG writing career.

A few years down the road, SLUG had the bright idea to put me in charge of some other stuff outside of my column, things like the Summer of Death skate contests. These contests are some of my favorite memories, and there’s too many to count—like the time we did a contest behind Burt’s Tiki Lounge and it started raining cats and dogs, and we all said, “Fuck it. Let’s do this anyway.” Or the first year we took our contests out of the skate parks and did them at real street spots. I honestly saw some of the best local skateboarding go down at those contests, and I only had to take one kid to the hospital and never got sued.

Then there were the snowboard contests. Good stuff there, too. But the memory that stands out the most is when we rented a chateaux for an after-party and I partook in a large amount of mind-expanding psychedelics. It was all fun and games until, in a hallucinogenic state, I barfed all over the chateaux and forgot to clean it up. Needless to say, we didn’t get our deposit back, and I didn’t get paid for the contest that year, but it was still a great memory.

My encounters with the juggalos through the magazine are fond yet sometimes scary memories as well. The best would be when I went to cover an ICP show at Saltair and dressed up as a happy clown instead of a scary clown. All my friends thought I was going to get my ass kicked by juggalos. But no, once the juggalos saw our press passes and my photographer Dave Brewer’s massive camera, they all just wanted their pics taken and kept calling SLUG “The News.”

One awesome perk of writing for SLUG over the years is taking advantage of awesome media passes and privileges from time to time, even though I don’t really consider myself part of the media. As everyone knows, I love the Utah Jazz and basketball in general. And sometimes the mag enables me to cover the team, but on my terms. One such time was when I basically tricked CJ Miles—a former Jazz shooting guard who’s still in the league—to take me to The Cheesecake Factory so I could interview him about his rap career he had going on the side. I felt like a real baller for a night. And if you are wondering about CJ’s current rap career, don’t.

There are still so many great memories and adventures I’ve had from doing this article over the years, too many to fill this page, such as The Fucktards playing the SLUG anniversary party that was double-booked with a drag show, my epic interview with CC DeVille from Poison and giving out my first tattoo just to name a few. Happy anniversary, SLUG, and cheers to many more memories to come.