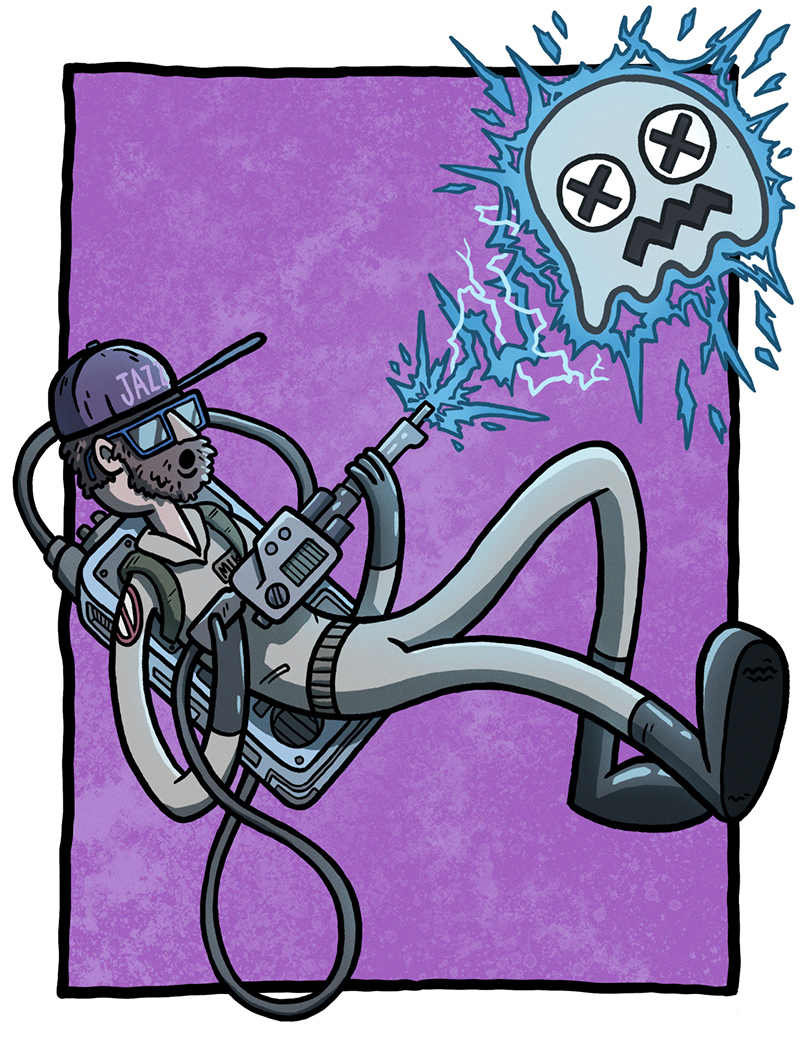 Ah, October, one of my favorite months. The leaves change, the air gets colder and crisper, the days get shorter, and aside from Aug. 13, which is International Lefthanders Day, Halloween is by far my favorite holiday. Although, any holiday that encourages drinking, not seeing your family or not buying a loved one a present is OK in my book. In order to celebrate everything spooky for Halloween, I decided to quit hunting Pokémon for a bit and try hunting ghosts around the SLUG office.

I was put in touch with a local ghost-hunting society aptly named Badass Spirit Outlaws, or BSO for short. I wanted to know just how haunted the SLUG office is. I arrived fashionably late to the office and BSO founders Benee Quibell, Jennefer Welch and Eva Lietz were there and had already identified a couple presences in the office. The identification of said spirits seemed to come easily to Jennefer, who is one of the team’s psychic mediums.

Right off the bat, Jennefer let us know that there was a man haunting the old SLUG bathroom who doesn’t like women for some reason. She explained to me that a lot of hauntings are due to these ghosts and spirits dying angry. They stay angry and go all poltergeist on your ass. That being said, remind me to die with a rock-hard boner in one hand and a nice scotch on the rocks in the other.

I spent a good amount of time interviewing the BSO ladies and swapping ghost stories, too many to fit in this article. There are so many notoriously haunted places in Salt Lake City, like the Capitol Theatre, the Rio Grande Depot train station and the Shilo Inn that just got remodeled, to name a few. And in my opinion, all of Temple Square is haunted as fuck.

But what about all the commercial haunted houses that open up this time of year? You know, the ones where we stand in line for hours and pay a bunch of money so we can be screamed at by high-school drama nerds? Well, Eva let me know that the Fear Factory on 666 W. and 800 S. is super-duper haunted, and that some very bad shit went down in the bowels of the factory—so bad, she doesn’t want to go back. After doing a quick Google search, it appears that many a factory worker was ground up or met an untimely, grisly fate in the old concrete-making plant.

But enough of these ghost stories. What about the SLUG office? It was getting dark as we ended the interview, and the BSO ladies were ready to see just what was going on in our little chunk of Pierpont Avenue. Two more BSO psychics, Mary Vasey and Anna Taylor, joined our little adventure as the ladies busted out all of their ghost-hunting toys and equipment. It felt like the first half of the first Ghostbusters movie, like before Peter Venkman starts blasting Slimer with his proton pack. (Side note: To my surprise, none of the BSO ghost hunters have seen the new Ghostbusters movie yet, leaving no review of the movie from people who actually deal with ghosts all the time. Oh, well.)

The BSO ladies had standard devices like flashlights, voice recorders and high-end cameras, and they had a bunch of weird shit I’d never seen before, like devices that monitor static electricity, a pad that would change colors upon a spirit’s request and some sort of phone app that would translate sounds from the other dimension. We were led to a corner of the office and set up the cameras and flashlights.

Jennefer took the lead in contacting the main spirit that was in there. Her psychic abilities helped us contact and locate Roger, a ghost who has mainly been living in the SLUG darkroom for quite some time now. We were able to ask Roger yes-or-no questions about his life as a ghost, and he would turn the flashlights we set up on and off in order to reply.

Unlike the angry ghost in our bathroom, whom we decided to leave alone—because leaving people alone in a bathroom is the right thing to do—Roger was happy and content roaming our office. Roger also let us know that he is gay and felt safe in our darkroom, which ironically doubles as a closet for the office. When I made the obvious joke to Roger about him coming out of our closet, he quipped back about how much he likes my fur coats.

Roger had a sassy sense of humor about him that one might expect from a gay ghost. He also said that he liked our musical choices for the most part and is particularly fond of SLUG Executive Editor Angela H. Brown—he likes her hairdos. He also likes photography (hence living in our darkroom) and has no plans of leaving anytime soon. Seeing as he isn’t interrupting any of the SLUG staff’s work ethic, I say we let him hang out awhile. Besides, exorcisms sound like a lot of work, no matter how awesome of a follow-up article it might make.