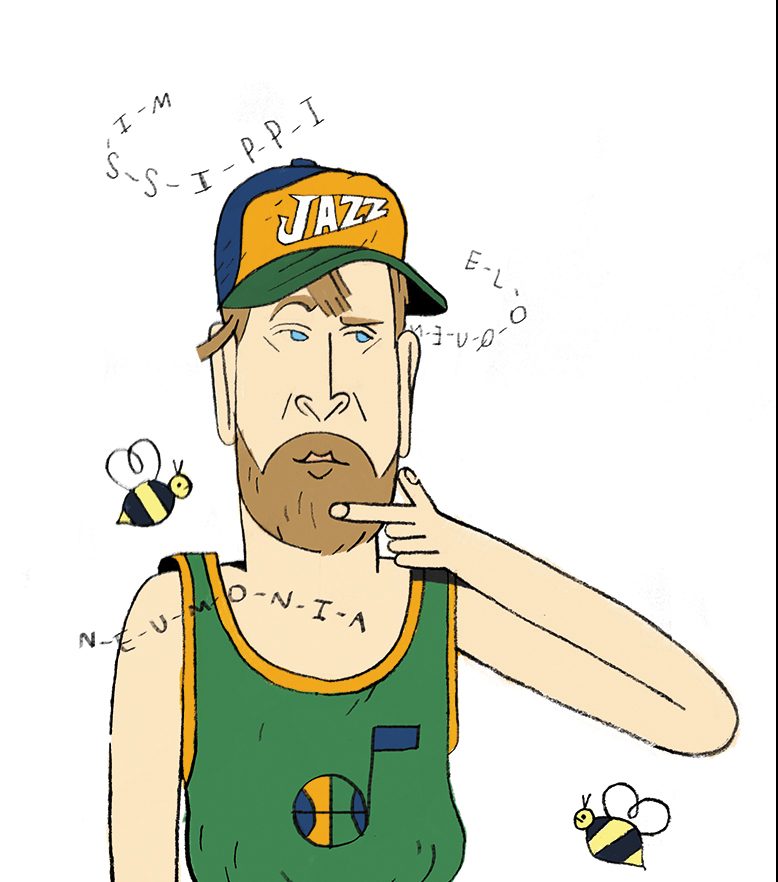 Much to the chagrin of many a SLUG copy editor over the years, I am a terrible speller. Rightfully so, people look up to me for many things, but my construction of the English language is not one of them. Oftentimes while writing these articles, I find myself making up words partly to fuck with the SLUG copy editing team and partly because it’s fun. Words like “Recockulous” and “Undonkdified” will sprinkle though my articles from time to time. Here, I’ll use these in a sentence so you know what they mean: “Don’t be so recockulous!” “Based on how well you’re tipping him, that bartender’s attitude is totally undonkdified.”

As a kid, my poor spelling was just another thorn on my rose of insecurities. But nowadays, there’s spellcheck and his bastard cousin, autocorrect. Not only is technology rendering future generations socially inept in most ways, millennials are shitty spellers now, too. If spellcheck and autocorrect got in a fistfight, spellcheck would win every time. How many times has autocorrect turned your “fucks” into “ducks” via intimate text messages, making your significant other wonder why you want to make them quack real loud?

I sat down with Tommy Hamby, the Adult Services Coordinator of the Salt Lake Public Library to talk about a special outreach program the library will be hosting. It’s a spelling bee! But not just any kind of spelling bee. Nope, BuzzWord: An Adult Spelling Bee won’t be full of those future MENSA-member children you see on ESPN from time to time looking like they are about to pee their pants all while making you feel really stupid. It’s going to be a drunk spelling bee going down at Urban Lounge this month.

I know that encouraging minors to drink is not socially acceptable outside of Europe, but man, every time I watch a spelling bee on the telly, I keep thinking that if some of those kids just had like a half-shot of Grandma’s special medicine to calm their nerves, they wouldn’t be freaking out so hard. So it made me happy to hear from Tommy that our awesome public library understands that the brutal nature of competition sometimes requires a calming of the nerves that alcohol can provide and will be endorsing a drunk spelling bee. After all, Tommy is the Adult Services Coordinator, and a big part of servicing adults involves getting them drunk, in my opinion.

I asked Tommy where they got the idea to do a spelling bee in a bar. I’m all for people doing weird shit in bars. He said that other libraries around the country have done it as a way to stay connected to the community. The public library also hosts a trivia night at the library that is pretty popular, too, but alas, no booze. So bringing a spelling bee to a bar is awesome, especially if karaoke night gets bumped.

The format is pretty simple: 25 people enter, and if you fuck up a word because you are too fucked up, you’re out! But since it was being held at a bar, I tried my best to get Tommy to change the rules a bit. I think the best way to do it is for every correct word you get, you HAVE to take a shot—and make the contestants who get eliminated buy all the shots. I don’t know if that’s how its gonna go down, but I always respect people who can do mildly amazing feats while tanked.

As I mentioned, Urban Lounge will be hosting the spelling bee due to the Salt Lake City Public Library’s liquor license expiring. Many of our loyal SLUG readers are familiar with the venue, which hosts SLUG Magazine’s very own Localized music showcase every month, and I used to clean up puke there, so I’m very familiar with this particular bar’s demographic.

Tommy told me they will be somewhat customizing words for the bee based off of said demographic. If you are home now studying for the bee, here are a few words I’d suggest studying up on relating to Urban Lounge: cirrhosis, chlamydia, diarrhea, gonorrhea and scenester. Most words I’d hear come out of people’s mouths, though, when I worked there, were short-syllabled and mumbly. I’m expecting this to be different the night of the big Bee.

Another tip I would give you is watch out for those pesky homonyms, a word that sounds just like another word but is spelled differently and will have a different definition. It’s like “night” and “knight,” or “cool” and “kewl,” or “queen” and “kween.” You can ask the judges to use your word in a sentence, which I highly recommend, so don’t get drunk and forget that.

Also, I forgot to mention that the winner will receive more than just the jealousy and glory of their nerd-peers. They will also receive a trophy and a deluxe Scrabble game. And runners-up will get little bee pins. So come flex your anti-autocorrect skills and drink some booze on Feb. 8 at 6:30 p.m.