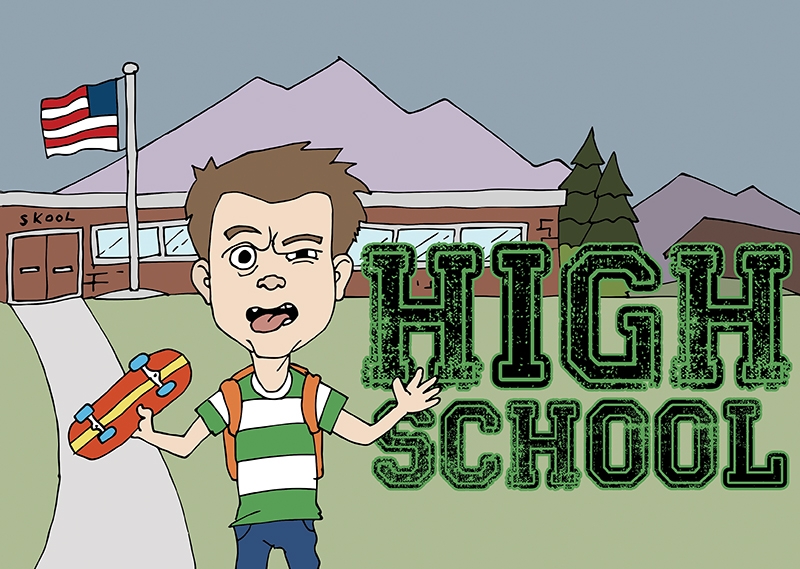 The leaves are changing, the temperature is dropping and another glorious, globally warmed summer is over. September is here, and if you aren’t already cutting class by the time you read this, you should be. I love the idea of some future high school dropout reading my article in their favorite stoner alley while ditching math. That being said, for this month’s column, I chose to write about one of my least favorite life periods: high school.

I’m sure you are all dying to know what I was like back in the mid-’90s. Life was different then. There was no War on Terror, but there was a war on drugs. The biggest news stories were O.J. Simpson killing people and the president getting his dick sucked. 9/11 had yet to put all of these stories and scandals into perspective and, regardless of all these current events, I couldn’t have given less of a shit about any of it.

Seeing as how I’ve put up mental barriers in my brain to block out my life from about 1992-1997, I had to dust off my old yearbooks just to remember how bad I hated high school and junior high. I realized that my handwriting (and spelling for that matter) is exactly the same, and apparently, Mrs. Evans, my seventh grade English teacher, was and will always be a massive bitch, according to the scribbles in my yearbooks.

Just to set the stage for what I was like in high school, let me run through my career at Olympus Jr. High real quick. Seventh grade: I’m about the biggest fucking dork ever, totally on Team Picked-On. Eighth grade: I start drinking and smoking pot—best decision I ever made in junior high—and stopped getting fucked with. Ninth grade: I’m a low-level pot dealer and I start skateboarding. When I finally got to the tenth grade, there was such a feeling of relief. There was no feeling of accomplishment for finishing junior high, just a huge sigh that I would never have to go back to that hell hole. I went into my sophomore year with a tremendous plan.

The plan was that the first two weeks of each semester, I was going to get as stoned as I possibly could every morning before first period and every lunch break before fifth period. Knowing that those periods were going to be when I’d regularly get stoned, I figured that if my teachers for those classes thought that stoned me was normal me, they would never suspect when I was actually high. Strangely, this plan actually worked. When I wasn’t stoned and actually decided to pay attention in class for some god-unknown reason, it made my teachers feel like they had really taught me something. I call this whole strategy the “Over-Achievement Theory of Life.” It works well in most job situations, and can be implemented in college as well.

The highlight of my sophomore year ended up with me getting arrested with a couple of friends at the 7-Eleven across the street from our school. Half the Holladay police force was there to greet us for a beer run gone horribly wrong—apparently, some dick called 91,1 saying someone was robbing the store. It sounds bad, but getting cuffed in front of your peers could do awesome things for a high school reputation if you were a wasteoid like me.

My junior year started off similarly to my sophomore year, but eventually I went to four different high schools. My mom had me shipped out to Sandy to live with my dad after the botched beer run. Since I was out of Olympus’ jurisdiction, they finally kicked me out for ditching class too much and said that I had to attend Brighton. I went to Brighton High School for eight days before my parents put me in drug rehab. While cleaning up my act, I transferred to Cottonwood High School and finished my junior year there.

Between my junior and senior years, I committed myself to sobriety and summer school. Since I didn’t want to hang out with any of the Mormon dorks in my Sandy neighborhood, and I wasn’t tough enough to hang out with the straightedge kids back then, my best friends were my dog and my skateboard. Being a loner back then was great for increasing your punk rock status. It still kind of sucked, but there was no way I was going back to rehab. That place sucked donkey balls.

My senior year was boring as fuck and not so meticulously planned. The goal was to just grin and bear it, and get through the fucking school year without ending up back in rehab. I knew that I just had to make it to 18 so I could move out, get tattoos, stay out past 11 p.m. and go to any punk rock show I wanted to. Senior year was rough, but I made it. I had lunch every day with my fellow loner friend, Brenda, who was a lesbian then, but isn’t anymore. I had made it all the way through high school without ever having a girlfriend, although I did kiss four ugly girls and played with one set of boobs. Skater boys were far from cool back then. I did go to senior prom, but I ditched my graduation to go see Blankshot and Homesick play at Phaser Fun. I don’t want to explain what that last sentence means, but if you know, you know.