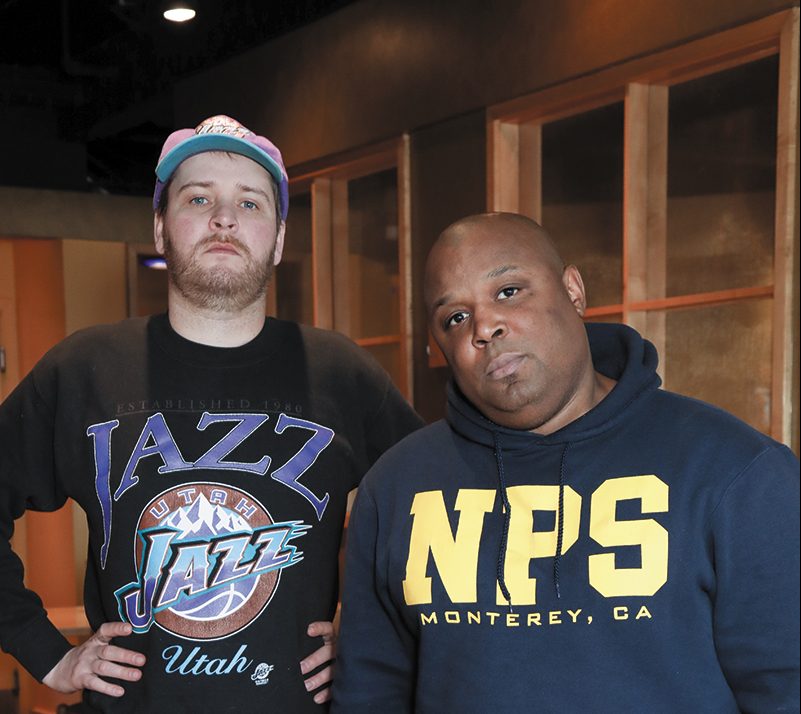 Mike Brown: On the Jazz Beat with Tony Jones!

By the time you are reading this, cruel basketball gods willing, the Utah Jazz will be locked into the Playoffs for the second year in a row. But the basketball gods have been exceptionally cruel this year. Like a vengeful Greek god with no regard for basketball humanity, it hasn’t just been to the Jazz by injuring our starting center for a big chunk of the year or by dishing out an insanely tough December schedule, but by striking superstars across the league as well.

But what’s done is done, and as the Jazz deal with the cards they are dealt this year, overall, the entire franchise is in great shape. We lost star player Gordon Hayward and replaced him with a bigger star in Donovan Mitchell, which, to me, feels like getting dumped by an average person, then going to prom with the coolest kid in school and dancing with them in front of your ex—a pretty good feeling indeed.

But enough about my tiny season recap. This month, I was fortunate enough to interview The Salt Lake Tribune’s beat writer for the Utah Jazz, the great Tony Jones. Seeing as how SLUG Magazine and The Trib aren’t exactly competing for readership, the interview was easily doable. It was awesome for me to pick the brain of someone who has such close access to the team I love more than Hot Pockets on a cold winter day.

I love talkin’ b-ball with people, whether it’s a wasted pal at the bar bumbling incoherently about stats that don’t make sense or arguing with strangers over Twitter. But I gotta get my extensive knowledge on the latest team info, gossip and trade rumors from somewhere. I’m not friends with Hayward’s old barber; thus, enter Tony Jones.

In my opinion, no one is more locked into what goes on with the team than Tony. All you have to do is follow his Twitter feed at @tribjazz to know what I’m talking about. Of course we talked hoops over a bowl of wontons, but I was also curious as to how Tony puts it all together and what his job entails.

Tony started out covering high school sports in Florida, and somehow found his way covering sports in Utah starting 10 years ago. For the last four years, he exclusively has covered the Jazz. I asked him what his favorite teams are as a fan, and he told me that it’s the Mets and the Knicks, which I can forgive him for, seeing how he’s actually from Brooklyn. But when it comes to his job, the feelings of being a fanatic take a back seat, approaching his job as professionally as possible and keeping emotions out of it. It’s pretty much the opposite of my approach for anything I write about the Jazz or life in general. Professionalism will never be my journalistic strongpoint.

Part of a beat writer’s job is being a lifeline between the team and the fans. Before the internet took over the world as we know it, a beat writer would mostly just go to the games, get some interviews, and you’d read it in the newspaper the next day. But as apps replaced paper, the job as a beat writer has seemingly changed drastically. Beat writers use podcasts, Instagram, Snapchat, Twitter, etc. to connect with us the general public. Oh, and they still write articles.

When I troll Tony’s twitter and other NBA-related handles looking for fact nuggets ’bout the team to make myself look smart, a lot of it comes across as hearsay or rumors. Tony assured me that everything he tweets is in fact confirmed and also gets run past the Trib for fact-checking before the tweet even goes out. That’s called being a professional, folks.

This led me to ask him about his sources, where they come from and whatnot. Of course Tony could not divulge names. Getting great sources requires a lot of trust-building and fostering relationships over time. Fair enough. But I had to ask: Given the soap opera that is off-season free agency—which the NBA has inadvertently produced—I can only imagine that solid sources are just as important to beat writers these days. Like literally, free agency this summer was more entertaining than the crappy finals, in my humble opinion.

Obviously, the main sources for beat writers are the players themselves. Tony is with the team constantly. He travels to where they play their road games and gets to ask them questions after games and practices because I can’t. I asked him how the players perceive beat writers in general. He says, “As a necessary evil.” But if you asked five different players that question, you’d get five different answers. It’s like any relationship. Beat writers and players need each other, whether they like it or not.

My last two questions for Tony were about the recently remodeled Delta Center arena (I know it’s named otherwise, but it will always be the Delta Center to me). First of all, I snuck my way into the media room in the arena last year and noticed that there were no beer taps in there, even though the media room is named after Hot Rod Hundley, which makes zero sense, but he couldn’t speak to the oversight. Also I asked Tony for the Wi-Fi password to the Delta Center. He told me he doesn’t actually have it, so that’s a no.