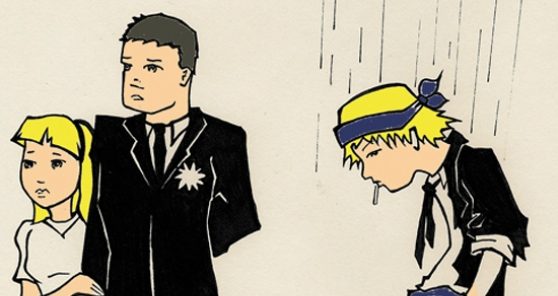 Have you ever been to a Mormon wedding? Gosh, I sure have. Lots of them, because I come from a big, darn Mormon family. As a tribute to them, I will only use Mormon swears in this article. Mormon curse words work just like normal swears (which is why I think it’s funny they don’t actually swear), but they are approved by the Motion Picture Movie Association to not turn a PG into a PG-13.

Mormon swears are frick, heck, gosh, darn and shoot. There are other actual swear words that I was unable to find the Mormon translation for, such as the big “C” word and the “A” word that means donkey. As soon as the Mormons can dig up the Leahona, that supposedly translated Book of Mormon (which is the foundation of their religion but they somehow can’t seem to find it), I’ll see if I can borrow that thing to get the new Mormon swear words.

I don’t know if Latter-day Saints join the navy, but gosh that sure as heck would be frickin’ darn funny. Sailors swear up a storm.

Anyway, I had to go to another Mormon wedding this week. I was so darn happy for my little stepbrother, but bored as frick. I’m not blaming him though. Actually, let me rephrase this. I didn’t go to the Mormon wedding. I’m not allowed in the temple. I went to the Mormon reception.

While the Mormons are allowed in the temple to get sealed for all time and eternity, I have to wait for what feels like an eternity in the temple lobby on babysitting duty, fielding questions from my nieces and nephews about why I can’t go to see whomever it is getting married. I usually just tell them it’s because I forgot to get a haircut. It’s a lot easier to use my poor grooming as an excuse than explain to a seven-year-old that there is no God.

After waiting in the lobby for a while, I get to wait outside the temple gates with frickin’ cameras held by annoying, fat, hired photographers telling me to smile like heck and where to stand while some darn family photos are flashed. Actually, for my stepbrother’s wedding, I skipped the temple part and went straight to the luncheon. And shoot, I also didn’t get him a goshâ€‘darn gift. I have a new policy with every wedding I go to now, Mormon or fun, where I give gifts to my friends when they get divorced and not when they get married. I figure you are in much more need of a gift when your better half is trying to take away most of your darn stuff. A present when you’re sad means a heck of a lot more than a present when you’re already frickin’ happy.

During the luncheon, where I had undercooked salmon provided by the bride’s dad (thanks!), there were some nice toasts by certain family members while holding up Mormon champagne, which is commonly known as punch. There was also a slide show, which I couldn’t see from where I was sitting, but guessing by the music all the photos where gosh darn cute.

Guess how long that took. Gosh, it took almost as long as Mormons get married for: time and all eternity. At least that was what it sure as heck felt like. Then, after the three-hour luncheon, we were instructed to be in Bountiful for the reception in about an hour, for more photographs. Oh fiddlesticks! Just enough time for me to stop at my apartment and smoke a cigarette and shotgun a Natty Light out of my boob-shaped beer bong I was supposed to review last month.

Any time I’m around Mormons for a while, I always feel the need to wash the wholesomeness off by breaking the Word of Wisdom as fast as I can. It sure as heck feels gosh-darn frickin’ good to even my morals out that way.

The reception is the worst part of the whole Mormon wedding process. I am astounded at how darn un-fun these things are. Even the people getting married hate them. If you’ve never been to one, let me explain.

Oh yeah, before I forget, I don’t think I’ve ever seen anyone dance at a Mormon wedding. And although I don’t like to shake my moneymaker very often, I honestly thought it was weird when I went to my first non-Mormon wedding and people were drunk and actually having fun. Weird!

While the bride, groom, and bride’s and groom’s parents stand there, a massive line is formed. Everyone who is invited to the wedding is obligated to stand in said line. It is a frickin’ slow line, too. And you get to shake the hands of the bride’s and groom’s parents, and the bride might hug you. My stepbrother’s bride didn’t hug me. I think I scared her, but we’ve only met twice so I don’t blame her. I hate hugs too.

As soon as the heck of a line dies down, the Mormon bride and groom can finally enjoy their wedding night in peace. I have no idea what happens to Mormon newlyweds on their wedding night, and given our sex education, or lack thereof, in Utah’s public school system, I doubt they do either.

Maybe the reason I don’t believe in marriage is because I’ve been to too many of these gosh-darn frickin’ Mormon weddings. I don’t need the government to tell me I’m in love, although I wouldn’t mind the tax break.

My oldest sister recently did the smart thing. She got married and didn’t really invite anyone from the family to attend the wedding or ceremony. I’ve never properly thanked her for sparing me from another boring wedding. So, thanks Becky!