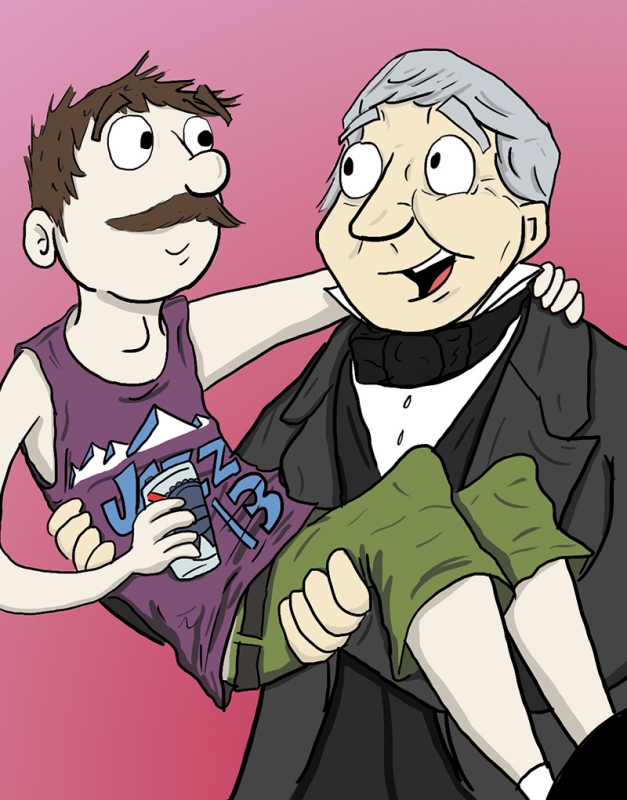 This month, I’ve chosen to write about those great men that lead our great country and how they are all great and stuff. These fine men adorn our currency and fuck with it when they are in office. They sometimes act like assholes and are easy targets for everyone to hate, but probably have one of the easiest jobs in the world because other assholes are making the real decisions and doing their job for them. Presidents’ Day is a shitty holiday because kids get out of school to celebrate, and us working stiffs have to grind away at our shitty jobs, and the kids who get to enjoy this holiday can’t even vote. How fucked is that? Anyway, I can’t lie: My knowledge of U.S. history is somewhat limited due to the large amounts of booze and apathy I’ve enjoyed for a majority of my adult life, but I’ll do my best to tell you who my favorite presidents are and why—in no chronological or historical order whatsoever.

Bill Clinton: Long before Facebook and Instagram, the news was different and the economy was somewhat stable. This was the mid-’90s, and we had a president who had puffed the weed and could play a saxophone. Could this guy get any cooler? Yes. He got his dick sucked in the Oval Office and didn’t get impeached. The most famous knob polish in history and the OJ Simpson car chase were literally the largest news stories when I was in high school. We didn’t live in the fear of another 9/11 like today. It was a simpler time, thanks to my man, Bill Clinton.

Richard Nixon: Why? Simply because he got caught being a bad, bad president. I’m pretty convinced that every man to ever take the American Throne has done some sort of terrible, shady shit. With the power to fuck with small sovereign nations at the push of a red button, who wouldn’t? Nixon somehow got narced out by some guy named Deep Throat (who got dibs on that nickname before the above mentioned Clinton scandal), and gave every conspiracy theorist for the rest of all time one great, big “I TOLD YOU SO!”

George W. Bush: The worst president in the history of presidents makes my list of favorite presidents despite being so horrible. He stole the office, so basically, there was nothing we could do—might as well look at the sunny side! For one thing, he supplied numerous late-night hosts and stand-up comedians with endless amounts of material—anyone that got off on complaining probably secretly loved the big lug. For me, personally, though, he was so bad at being president that my Republican family members stopped talking about politics at the dinner table halfway through his first term, and for me, this was a huge blessing. Besides all that, can you just imagine how fun it would have been to party with him in his college coke-head, raging-alcoholic days?

Jimmy Carter: Arguably the only decent human being to hold office (which has to be why he only lasted one term). I will forever be enamored with his presidency because of his brother, Billy, and more famously, Billy Beer. Most successful people have a fuck-up sibling, right? Also, seeing that sibling capitalize on his brother running the capital by branding his own beer is just a brilliant, heartwarming story, in my opinion. Riding on the coattails of the Free World in an alcoholic stupor sounds pretty sweet to me.

Ronald Reagan: What would the ’80s have been like without this guy—and how the fuck does a cowboy actor become leader of the Free World? Well, he had great hair. Every coke-addicted hipster should get an ironic tattoo of him—chances are, blow and crack wouldn’t be what they are today without this guy and his administration. Also, without this guy, where would punk rock be? He fueled the fire for my favorite cultural movement that I was too young to be a part of. The Dead Kennedys without Reagan is like an Oreo without the white stuff. It just wouldn’t be possible.

Millard Fillmore: Just because I think he has the coolest-sounding name. I asked the SLUG illustrator to draw him for this article to give one of the obscure dudes some presidential props. Other than that, I know nothing about the guy—probably just another rich, white asshole.

Although these guys are my favorite presidents, I didn’t vote for any of them—either because I didn’t want to or wasn’t born yet. I like to exercise my right to vote because other people around the world cannot, even though I’m convinced it makes little difference since no one I’ve ever voted for has won. I don’t really subscribe to a certain political party because I think parties should be fun, and political parties are boring.

For this upcoming Presidents’ Day, I ask you all to take a moment and reflect upon our nation’s great history and your favorite president. Is it Abraham Lincoln, the great inventor of Lincoln Logs? George Washington, the man who hated cherry trees and couldn’t lie about it? It’s up to you to decide. Just avoid the ski resorts because they are a total shit show this day.