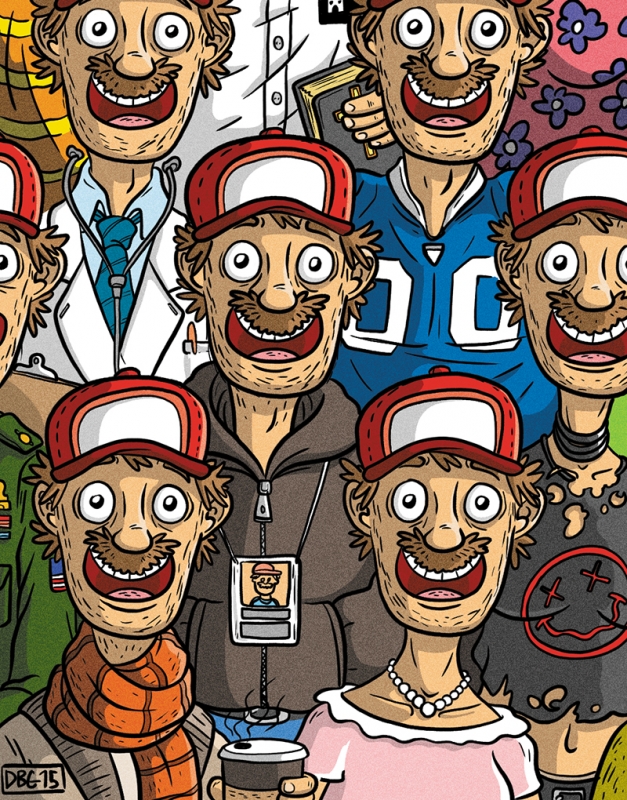 My name is Mike Brown. It is a plain and boring name. Actually, my full name is Michael Gordon Brown. My middle name comes from my grandpa on my maternal side—he was one funny son of a bitch. When my parents were initially going to name me, they wanted to name me Matt but decided that was too common of a name. True story.

Needless to say, my name is very common. Sometimes, I wish I had a cooler name like Jemie Sprankle, but I don’t. My plain, boring name does have some advantages, though. Like, if you are like me and trying to dig up some dirt on a girl you just started dating to make sure she’s only fun-crazy instead of regular-crazy, of course, you Google her ass before you ogle her ass. Just go ahead and put my name in a search engine and see what happens. I’m totally unfindable, which is pretty cool.
Another cool thing about my name is that, occasionally, I get to meet another Mike Brown, and we have an instant kinship. The first Mike Brown I ever met was when I was 9 years old and in the hospital after my sister’s horse trampled me. This Mike Brown happened to be a 6-foot-10 power forward for the Utah Jazz. He was pumped that my name was Mike Brown, too. I even had my Mike Brown poster of Mike Brown in Mike Brown’s hospital room that Mike Brown autographed “To Mike Brown,” for Mike Brown. It was an epic life moment and solidified my lifelong fandamonium of the Jazz. If not for that name, who knows—I could be a Lakers fan, and that’s just terrible.
Back in the day—when the Internet was just something my weird older brother was on and we had to hang up the phone so he could be on it—whenever you wanted to find an address or phone number for a restaurant or another person or anything like that, there were these weird things we had to use, called phone books. I don’t remember much about them, but one was white and one was yellow, and you could use them to prop up broken furniture. I do remember, though, that in the white one, everyone’s personal names, numbers and sometimes addresses were listed. When I first moved out when I was 18, I sure did feel grown up upon seeing my very own name and address printed in the White Pages.
The problem was, though, that unlike Jemie Sprankle, who would for sure only see his information in the White Pages, there were a whole bunch more Mike Browns all clusterfucked together, and this made me feel like a less important human being. So a few years later, my close friend Cody Noble and I decided to go through the White Pages and call every Mike Brown to tell them not to use that name anymore—while drunk at 11:30 p.m. We had a whole sales pitch down as to why they couldn’t use that name anymore, because I was an insecure Mike Brown and didn’t like the fact that there were so many other Mike Browns.
Fast-forward to the current age of technology—there are many, many Mike Browns all over the Internet. One night, I did a similar gesture to calling all the Mike Browns in the local phone book: I followed everyone named Mike Brown on Twitter and Facebook to see which Mike Browns would follow me back. Most of the Mike Browns on Twitter suck and are way boring, which bummed me out … but I did find a Twitter account, @mikebrownsonly. This guy is rad. I’m pretty sure his name is Mike Brown, and he only follows other Mike Browns. He was even tweeting about having a Mike Brown march, like the Million Man March, on the steps of the Washington Memorial. I would definitely partake in such a glorious event. Imagine: millions of Mike Browns all in the same place. That would never happen to Jemie Sprankle.
As far as the Facebook thing goes, I actually became FB Buddies with some Mike Browns, and now they regularly comment on my posts. They seem like all-right guys—in fact, one bartends in San Francisco and is friends with Princess Kennedy. But after friend-requesting all the Mike Browns, I came across tons of shitty musicians named Mike Brown. There was DJ Mike Brown, The Mike Brown Band, The Mike Brown Experience—all just reeking of suckiness. That bummed me out a bit about the integrity of my name. I mean, I know that my band, The Fucktards, was never that great, but at least I didn’t choose to put my name behind it. Maybe there’s a correlation between being a shitty musician and being named Mike Brown?
One lame thing about having my name is when cops shoot someone with my name—not because they have my name, but because they are black. It’s even stupider when people message me via Facebook or text or what-the-fuck-ever and say, “I heard you got shot! Har har!” I have a crass sense of humor, but that shit ain’t funny, nor creative. Yes, I coached the Cleveland Cavaliers until Lebron James got me fired—that’s a tad bit more clever—but having my name related to pigs being pigs bums me out.
Overall, I’m OK with my name. It’s a fine name. And what’s in a name? Nothing—it’s just a name.