One night while I was balls deep in a sea of Jim Beam and Budweiser at one of my favorite downtown dives, the Jackalope, I was checking my twitter feed, which was flooded with #OccupyWallStreet crap. Then it struck me—I could single-handedly save basketball. #OccupyNBA was born. It was time to take action. 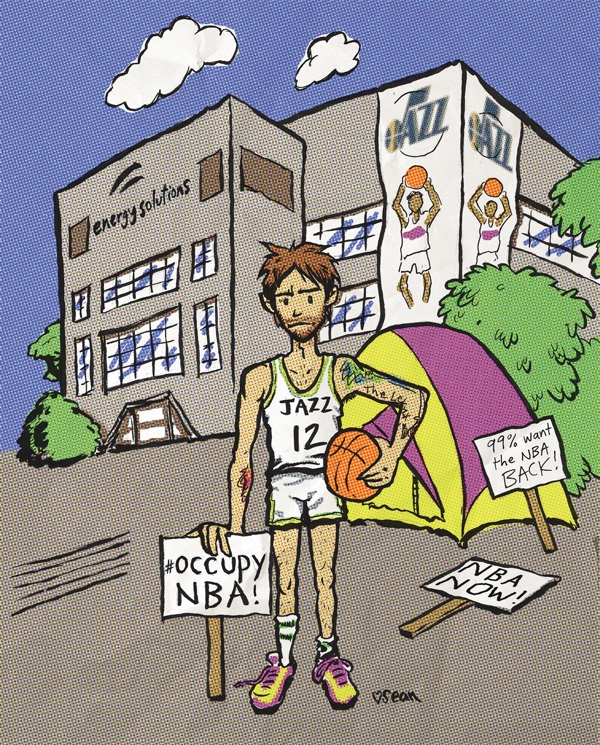 Mike Brown is a part of the 99% that wanted to watch basketball. #OccupyNBA Illustration: Sean Hennefer

2010-11 Utah Jazz season was like Michael J. Fox in a martini bar: shaky. The best coach professional sports had ever seen rode his John Deere into the sunset sans NBA title. A few weeks later, Deron “Coach-Killer” Williams was sent packing to one of America’s most well known shit holes: Newark, New Jersey.

The most luminous cloud of this shit storm was knowing all season that 2011-12 NBA Basketball was in more jeopardy than Alex Trebek. The NBA lockout was lurking like a slow moving tsunami.

The last time this happened, during the ‘98-‘99 season, the Jazz got fucked harder than a Kardashian on All-Star Weekend. The tremendous trifecta of Stockton, Malone and Hornacek were aging, but still had one last title run in the tank, especially given that that bald bitch ass with a gambling problem known as Michael Jordan was retired.

But the condensed schedule was too much for the Jazz’s Bengay-drenched, old tired legs. It’s a different situation this year, seeing how more than half the Jazz team can’t get into a bar. Legally, that is. Some people would be ecstatic to have dinner with a Jazz player. Well, I have, and now that I can cross that off my checklist, I really want to show Gordon Hayward and Derrick Favors how to chug an Irish Car Bomb properly.

November of 2011 finally came, and not having to rearrange my life around Jazz games was only going to lead to two different life options: I was going to be way more productive or way more drunk.

One night while I was balls deep in a sea of Jim Beam and Budweiser at one of my favorite downtown dives, the Jackalope, I was checking my twitter feed, which was flooded with #OccupyWallStreet crap. Then it struck me—I could single-handedly save basketball. #OccupyNBA was born. It was time to take action.

When I’m driving in the afternoon, I’m listening to sports talk radio. For weeks, so-called expert journalists were trying to explain what the fuck a collective bargaining agreement was and how the lockout worked to us laymen, but all I saw were millionaires fighting billionaires over more money than I’ll ever see in my life.

Fuck both sides of that fight—the real victims were the fans. The sports talk radio show guys kept saying that. And I, for one, refuse to live my life as a victim. Shit happens to everyone. You can either sit in the pile and learn to relish the smell or get your shovel and start digging your way out of it.

So, instead of complaining, I formulated a plan. It was apparent that the short bald fuckhead named Derek Fisher, who was “representing” the players alongside that dick fuck Billy Hunter, was never going to respond to my tweets. Mostly because I was tweeting him to get his head out of his dickhole and give me some fucking basketball. I tried to tweet that midget gremlin-looking fuck Commissioner David Stern the same thing, but Stern doesn’t tweet.

Time to formulate a solid plan that involves tents, but doesn’t involve killing any homeless drug addicts. Step one: Make some #OccupyNBA picket signs that say, “99% of the US population want some fucking basketball,” and “Stop player and owner greed.”

Step two: Camp out in front of the Delta Center statues (I refuse to call the house that Stockton built “Energy Solutions Arena”) until security tells me to leave, and then have one of my buddies across the street call all the local news stations and film me in case I get pepper sprayed.

Step three: Have nightly marches from the Delta Center to the nearest Larry H. Miller used Toyota dealership and give the man in charge of the Jazz a piece of my mind. I respect you, Greg Miller, but you will never be the genius capitalist your great father was.

As happy as I was that I could finally say that I was getting paid more than an NBA baller for the month of November, the time to hit the streets and exploit my first amendment rights had come—but it was fucking cold outside. So instead, I just bought the new Elder Scrolls V: Skyrim for the Xbox to occupy my time while I resorted to some final desperation tweets.

Finally, out of seemingly nowhere and out of hours of negotiations that I didn’t give a shit about, all the douche fucks responsible for numbing my life with sports came to an agreement and decided to play some goddamn hoops. I’m like Moroni—I don’t mind tooting my own horn. I feel personally responsible for bringing back the NBA to the fans all through a simple hashtag I created. Next time you see me, buy me a shot as a thank you. Because of me, basketball is back. You’re welcome, bitches.