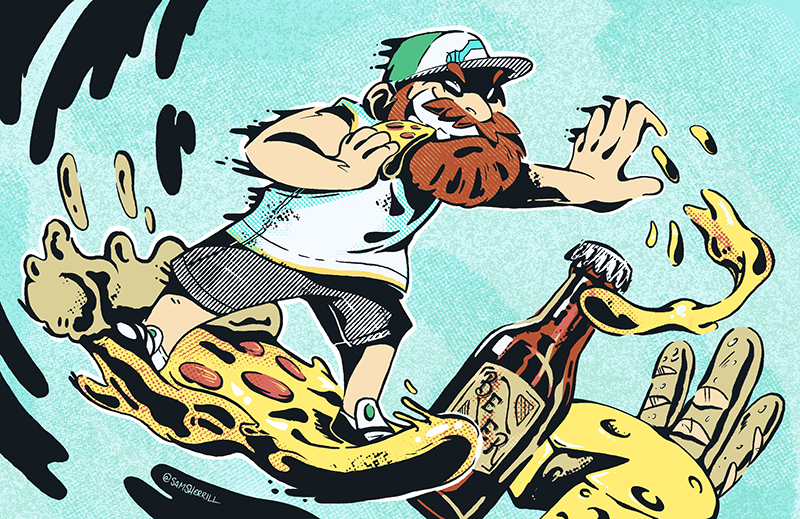 I don’t have any answers for the current state of the union, but I can say that instead of a nation divided, a pizza divided shall unite us and heal a sick and spiritually broken nation. For that, I am eternally grateful. Behold, the pizza, quite possibly Italy’s greatest gift to humanity. France gave us the Statue of Liberty, which is super cool and all, but that statue won’t feed me for three days straight for just five bucks. Thank you, our boot-shaped-country friends, for your amazing gift.

Despite my belief that pizza can unite and heal a broken nation, there is still division and turmoil in the pizza community. There are never-ending debates that need to be put to rest if we are to come together and heal. Debates such as New York–style versus Chicago deep dish, and so forth. Does pineapple belong on pizza (which I will get to later)? Luckily, I live in Utah, meaning I have no horse in this race. I was raised on bland Mormon food (the dominant religion isn’t exactly known for their culinary arts, but when you gotta feed a family of 10 on the fly, you can’t really blame them for that). Mormon pizza was basically just a sloppy joe bun with Hamburger Helper and ketchup on it.

Now, I mean no offense to any of the fine pizza retailers throughout the great Beehive State. There is delicious pizza top to bottom throughout the valley. But as a pizza journalist, I have to remain blunt, honest and unbiased. I was recently involved in a friendly debate about who has the best, most authentic New York–style or Chicago deep dish in our town—and to be honest, nobody does. Again, no offense, and my mind and stomach can change their respective opinions easily with just one slice. But I can’t lie, there is nothing in Salt Lake that compares to what the East Coast and the Midwest have to offer with regard to pizza pie.

And yes, I have been to both cities and partaken of said slices, and treated the experience as holy as a sacrament in order to form this opinion. I was visiting Brooklyn once, and the friend I was staying with offered to take me to get the best pizza in the world, with the exception that we would have to wait in line for two hours. I hate lines but love pizza—and love is about sacrifice, so I said let’s do it. Lo and behold, she was right. The moment the mozzarella and basil on perfect crust hit my palate, I knew what a slice of heaven must taste like.

Now speaking of things that aren’t as holy but are probably on par with the culinary merit of taking sacrament each Sunday, we must address the pineapple debate. Pineapple on pizza has been tearing apart friends and families for centuries—it’s time for that to stop. There are many beautiful things about pizza, from the way it cures our hangovers to the way it sustains our economy. To me, pizza in general is just as beautiful and diverse as humanity. There are vegan pizzas, meat-loaded pizzas—I’m sure there are some raw-food, hotdog pizzas out there somewhere. There’s no wrong way to pizza. For example, I hate olives and mushrooms, so please leave that off of my half of the pizza. I’m not really into ham and pineapple, but if that’s your thing? You do you.

Speaking of different toppings on half of the pizza, let’s discuss this for a bit. First off, shoutout to the pizza-makers who put up with this shit. What other food will do this? Not one, really. But the half-and-half pizza order is a great way to get to know someone and build a friendship, which solidifies my theory that pizza can heal the nation. Just like the kind of shoes a person wears, you can tell a lot about someone by how they top their pie.

Pay Me in Pizza

On a different topic, I’d like to discuss pizza as a currency. I once worked in a bar across the street from a pizza shop. We would trade the owner of said shop draft beer for pizza—a fair transaction for everyone. And as I thought about this, just about everything I use money for, I can use pizza for. Move over, Bitcoin: Once the recession hits, pizza is taking over.