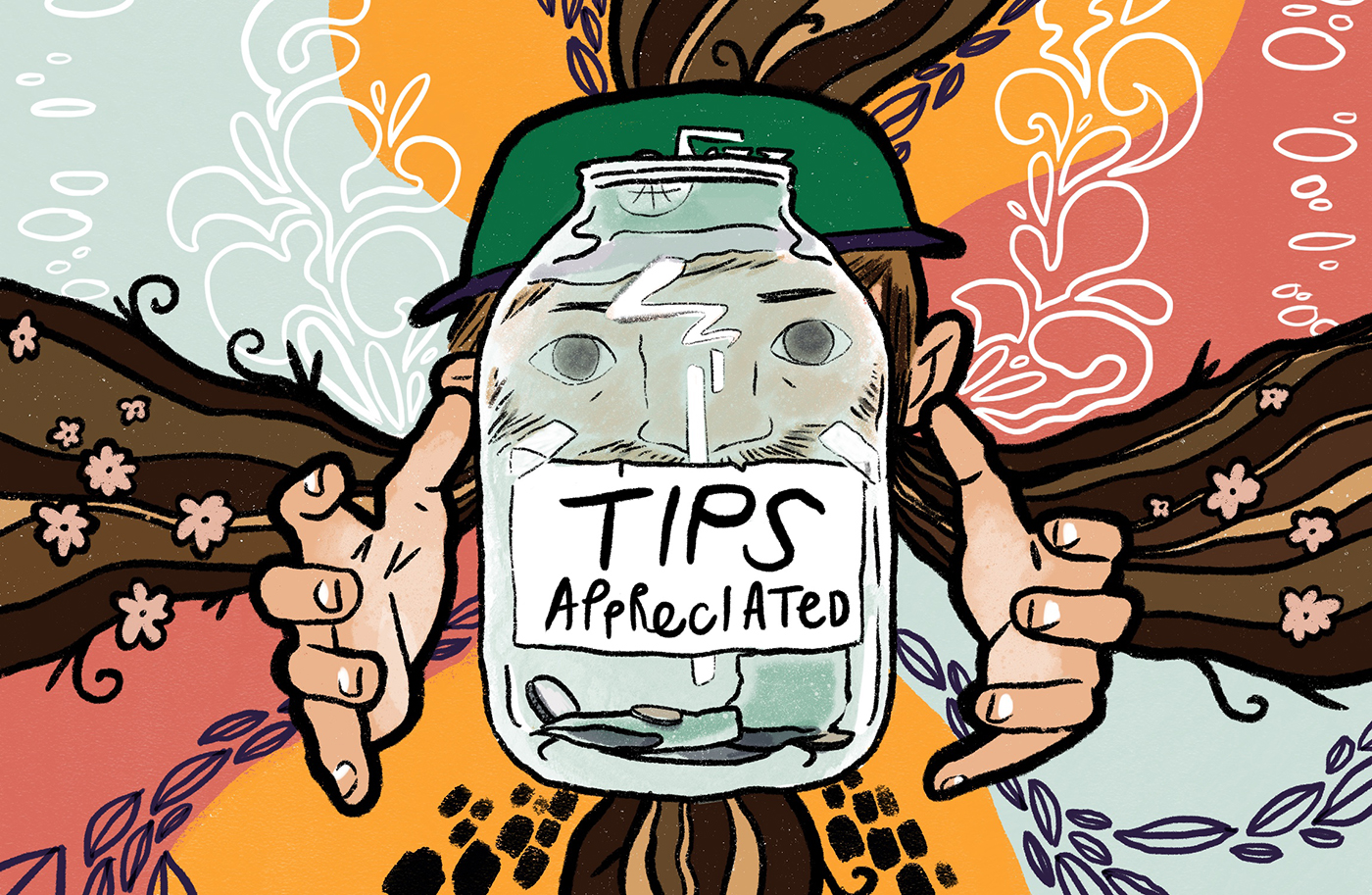 I’ve humbly been part of SLUG Mag’s Beer Issue since its inception. I have gotten drunk several times for SLUG assignments in order to fulfill the responsibilities contributing to a Beer Issue entails. I’ve done the math, and a rough estimate as to how many beers I’ve had in my lifetime is around 15,000—that’s not a brag, more of an embarrassment, to be honest, but just listing my qualifications for this issue.

Seeing as how I’ve written tons about beer and being drunk and stupid, I thought I’d take a different angle for this year’s Beer Issue. I want to tackle the topic of tipping. Seeing how beer is served at bars, bars like you to tip and I’ve bartended before, I’d like to cover some etiquette about tipping from both the bartender perspective and the customer perspective.

“Seeing as how I’ve written tons about beer and being drunk and stupid, I thought I’d take a different angle for this year’s Beer Issue.”

I’m sure that everyone reading this either has a friend in the dreaded service industry or is deep in said industry themselves. I’m sure you’ve always heard one of these people bitching about their tips. The age-old adage of “If you don’t have money to tip, then you don’t have money to go out to the club” will forever ring true, but alas, still bears repeating.

Needless to say, the more you tip, the more the bartender will like you. Remember your drink orders, and maybe cut the line if you spit cash out like a broken ATM. This also means that you will have more fun. So if you just won the lottery or if you live in SLC and just refinanced your mortgage, go nuts! Spread the wealth and the love.

Here’re my pro moves for tipping if I’m drinking in a new environment. Its kind of like a sandwich made out of tipping. On my first round, I’m very polite, not flagging down the server or bartender—they see me and I know it. I might casually hold my cash in my hand but I’ll maintain respect and let them serve me when they are good and ready.

Now the sandwich part. I tip pretty fat that first round. This makes sure rounds two and three get handled faster. On rounds two and three, I tip appropriately, nothing crazy. On my last round, I tip fat again, hence the sandwich. (Also, when drinking beer while I’m out, I only order bottles. Nothing against a cold, frothy draft, but a bottle is faster to order, and I always have a weapon if needed.)

Now, you may be wondering, what is an appropriate tip? Rule of thumb while eating out is 15–20%. In most bars a dollar a drink seems to be the rule of thumb. But keep in mind, if you order a fancy-pants craft cocktail that takes five minutes to make and costs $14? Well you better be tipping more than a dollar. Pay to play, player.

Another theory I have on tipping is don’t let bad service excuse you from tipping, especially in a crowded, noisy bar. You have no idea how many times your server’s butt got slapped by Goldman Sachs interns that shift, or how much puke the bartender is going to have to clean up at the end of the night. And I’d like to think that if the service is bad because the bartender is having a bad day, well, my cash can make their day better, and I just did my good deed for the year.

“You have no idea how many times your server’s butt got slapped by Goldman Sachs interns that shift, or how much puke the bartender is going to have to clean up at the end of the night.”

Some other tips for tipping, customers: If you’re using a fake ID or breaking any other laws in the bar, you’d better be tipping extra. Also, your level of charm or physical attraction doesn’t pay your bartender’s rent. The bartender actually isn’t your friend; keep that in mind.

OK now for the other side of the bar: some tips for bartenders to milk that extra cash out of people. The very first thing I learned about bartending was simple, and had nothing do with drinks. It was just this: Treat EVERYONE like a big tipper. And no matter how tempting, never tip shame and never call someone out for being a stingy piece of shit. Different people tip differently. An old-school power drinker typically tips fat at the end of all his rounds, so don’t freak out on them. If someone isn’t going to tip you and is just being an asshole, well, that’s just how the world works. That guy is probably an asshole everywhere he goes, and that’s his cross to bear.

This one is simple but logical, too: Drunk people usually tip big because people are bad with their money when they are drunk, so get your customers drunk. Also, the best tippers, in my experience, have always been drug dealers and strippers. They usually have wads of cash—literal wads—wrapped in rubber bands. As soon as you see that rubber band, you take care of that person.

“The bartender actually isn’t your friend; keep that in mind.”

If need be, it can sometimes be appropriate to have a “tip talk” with the barely-21-year-old who just started going to the bar and can’t understand why beers cost three times as much as they do at the gas station. It’s the reason is that you can’t hook up with someone as easily at the gas station—you’re paying for the ambience. But I recommend avoiding this conversation altogether. We all were stupid about something once, and life is about learning.

Well, that’s about it for talkin’ tips. Tip your bartender, be nice—especially at last call—and have fun!