Apparently, just like actual SLUG readers, IRL slugs are attracted to the sugar in the beer—but they drink too much, get drunk and drown in the beer. 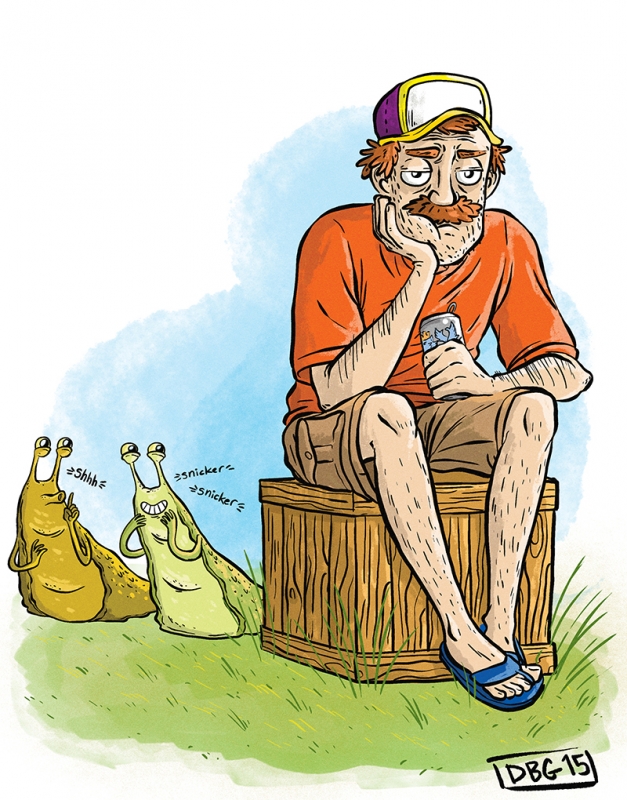 Illustration: D. Bradford Gambles
If there ever is a zombie apocalypse, I’m so fucked. Like a doughnut in a police station, I’ll be the first one eaten. I can barely cook, I don’t own any guns, and after watching four seasons of The Walking Dead, I’ve realized that gardening is important to facilitate humanity. Gardening won’t stop zombies from barging into your compound, but growing food is necessary, I guess.
For this Beer Issue, SLUG gave me a challenge that sounded easy on paper but proved difficult in real life—or IRL, as the kids like to say these days. They wanted me to use different beers to lure slugs out of my roommate’s garden and review the beers based off of which beer killed the most slugs. Apparently, just like actual SLUG readers, IRL slugs are attracted to the sugar in the beer—but they drink too much, get drunk and drown in the beer. It’s an old gardening trick to protect your vegetables by killing the slugs before they munch your harvest. Just like me, the slugs like beer more than their vegetables.
SLUG is at the point where they want to kill other slugs. I didn’t really know how I felt about that. I thought SLUG would be allies with all other slugs, but for the Beer Issue, nothing is sacred.
Like I said, I know nothing about gardening other than that a tomato is actually a fruit (did you know that?). I didn’t know that slugs like gardens. But everyone gets hungry. Eventually, a garden turns into a salad, so it’s important to kill these slimy things, or you won’t have a chance to toss your salad some day.
I have no idea how a slug actually eats, though. Do they even have mouths, or just, like, absorb the vegetables with their slime? Hell, how do they procreate? Is a slug asexual? So many questions, so little time. I do know about beer, though. I’ve drunk a bunch of it in my lifetime. I was hoping that my knowledge of beer would outweigh my disknowledge of slugs and growing things.
I was given a six-pack of Bohemian beers with three different flavors to pit against each other, to see which one would annihilate the most slugs. The Bohemian Czech Pilsener, my personal favorite of the three; Bohemian Cherny Bock, a delightful dark beer; and the Bohemian Viennese Lager. They’re all fine local craft beers, but could they kill slugs?
The idea of using alcohol to kill a living creature made me reflect on my own life choices for a minute. So I decided I’d better drink at least three of the beers so I wouldn’t think so much. I cut the tops off the other cans and gently placed them in the dirt pile and waited for the slugs to come. I waited. And I waited. Then it rained, and I waited some more.
These different beers chosen to battle each other in the war on slugs are all locally crafted out in Midvale, Utah. One thing that I really like about Bohemian is how concentrated their beer selection is. Instead of trying to make a ton of different beers to satisfy everyone like a lot of breweries around the nation do, they seem to choose to focus on brewing just a couple genuine lagers, and they brew them right.
The Cherny Bock is their black lager. It’s not too thick and heavy, and I can drink this faster than most other black lagers. In fact, Cherny means black in Viennese. You know how I know that? I Googled it. [Editor’s note: “Cherny” means black in Czech. Also, Viennese is not a language.]
The Viennese Lager is crisp and drinks fast, too. It’s not as heavy as the Cherny Bock. I went to Vienna once to find Beethoven’s grave and the Arnold Schwarzenegger statue and memorial. I’m not sure if that even exists, but I looked anyway.
The last beer to review is the Bohemian Pilsener. Light and crisp, it reminds me of drinking rays of sunshine on a beautiful spring day. Although I liked all three of these beers, if I were a slug, I would go for the pilsner first—no doubt about that.
After three days, I went to see which beer was winning the slug-slaying challenge. It was hard to tell. It was early spring at the time of this writing, so there’s no vegetables yet. Maybe that was part of the problem. Or maybe it actually did work, like the beers were like tiny scarecrows—or beercrows, if you will—and they actually did their job by scaring away all the slugs.

So, to be honest, none of these beers killed a single slug. I don’t blame the beers, though—I blame my lack of gardening skills. The only gardens I’m truly familiar with are beer gardens, which maybe is where that term comes from: people using beer to harvest precious vegetables and peeing on the soil to kill slugs.