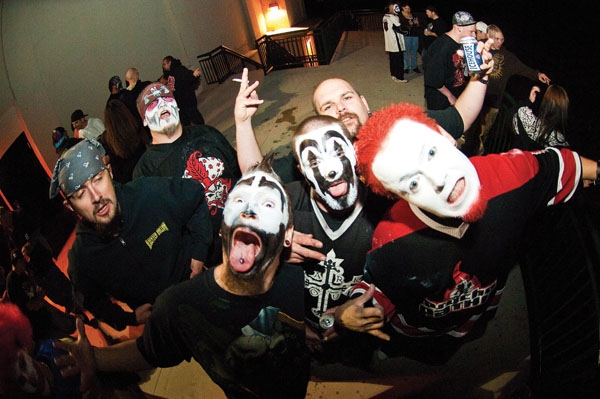 Let me start this article off by clarifying one thing: I am not a Juggalo. I mean this as no offense to any Juggalos (although it is very hard to offend a Juggalo), but I’m just not. For about the last year I have done a fair amount of research on the whole phenomenon that is the Dark Carnival in order to become a Juggalo ambassador for normal people. I am like the Jane Goodall of Juggalos—they are my chimps, so to speak.

Last year when I interviewed Chaos and his clown crew about the local Juggalo scene he asked me very seriously why I wanted to cover it. I told him that I work for a music mag and have a lot of musically-inclined friends, but none of us know what this whole Juggalo thing is about. When I was petitioning for an ICP interview with their PR people, I got the same question. Those Juggalos are skeptical of the media.

I call the local Juggalo hotline about once a week to see what the local hatchet flinging community is up to. When I got wind that the Insane Clown Posse was coming to Saltair, I felt a responsibility to go and cover it and try to get an interview with the head clowns. Mission accomplished. So SLUG photographer Dave Brewer and myself headed into the eye of the Juggalo volcano, not knowing what to expect. Well, I kind of knew. You know when you see five or six Juggalo kids acting a fool at the downtown library? It’s like that, but there are 2500 of them all in one place. Those are just the ones that could afford tickets to the show and were able to get their shifts at Taco Bell covered.

In order to enhance the experience I decided to dress up as a clown—not a sad scary clown like a Juggalo, but a happy bright colored clown, make up and all. I told this plan to several friends who became concerned for my safety. I wasn’t trying to get beat up by Juggalos at an ICP concert, but that would have made this story so much more awesome. I came up with a game plan in case shit hit the fan.

Phase one of said plan was to make it to and from the car in the Saltair parking lot as fast as possible. I realized that due to the heavy security that night, the chances of something going down inside were highly unlikely.

Phase two was to wear a hatchet-man necklace under my costume. If things got rough, I could whip it out to let the Juggalos know I’m down. It felt like wearing a cross around vampires. I actually had to whip the necklace out, twice.

Phase three was that I was wearing my Doc Marten steel toes. I can kick like a mule. Not that I’d want to kick anybody with those things, but if you are going down you are going down. I knew it was unlikely things would get to that point though.

I also made Dave promise that if something bad happened to just stand back and get as many photos as he could, to which he happily agreed. Needless to say, my clown costume was a smashing success at the ICP show. The Juggalos loved it. I also learned that night that Juggalos and Juggalettes love having their picture taken. We didn’t even have to ask anyone for their picture, they just started posing for us.

Overweight girls in clown makeup were showing us their Juggalette jugs, regardless of if there were hickies on them or not, and we didn’t even ask them to. I saw way more Juggalo genitals than I needed to that night—some of them felt that if you are gonna have your picture taken you need to go balls out, literally. My personal favorite picture of the night was when Dave was photographing a girl’s hatchet-girl back piece and her boyfriend whipped his dick out and placed it on the tattoo for the photo. I don’t think we can post that one in the online gallery (which can be found at slugmag.com), but it was a great picture nonetheless.

Me and Dave tried to get backstage with our media passes to no avail, but we did manage to get permission from security to get some pictures in front of the stage before the Faygo started flying. If you don’t know what Faygo is, it’s like Shasta out here. Just like corn-fed farm women, it’s big in the Midwest. I’ve noticed a religious undertone to the whole Juggalo thing. The hatchet man necklaces are like their crosses and Faygo is like their sacrament. I even met a guy who made me hold up some signs in the front row. He said the signs he made proved that he decoded a message in one of the ICP songs that saved him and three of his friends. I said, “You mean like Christianity saved?” and he was like, “Yeah.”

So when I interviewed Violent J the next day, I asked him about this. Are ICP prophets in a weird way? He said no, and that he doesn’t harbor any personal religious views but does believe in right and wrong.

As far as the Faygo thing is concerned, they sprayed at least 500 two-liters over the crowd throughout the whole show. I asked Violent J if ICP was officially sponsored by the number one enemy of dentists in the midwest. The answer was no. Faygo is a mom and pop company that isn’t “down with the clown,” as Violent J explained.
Seriously, they sprayed so much of that sticky shit on people, I felt so bad for the security guards in the front that were basically taking a shower in sugar. The smell of soda pop was heavier than the aroma of devil’s lettuce, no joke.

In case you’re wondering, Violent J’s favorite Faygo flavor is the cola one. He says it goes great with Captain Morgan.

I also asked Violent J what he has to say when people criticize his fan base for being, um, not that smart. He said he didn’t understand how people could knock something so cool—and that it’s hard to be a Juggalo.

When I inquired about just what the fuck the Dark Carnival is, Violent J explained that it is just some kick ass magic, and the basic belief of good and evil. I also wanted to know how all this shit got to where it is. The loyalty of the fan base can only be compared to two other bands I hate: The Grateful Dead and Kiss.

Was the success of ICP and their huge following planned from the beginning? Say what you want about the ICP, but to create a movement is a pretty genius marketing strategy. It worked for Joseph Smith. Violent J said that there is no way that he and Shaggy 2 Dope are smart enough to plan something like that. I have no reason not to believe him there. When I asked him where the word Juggalo came from, the answer wasn’t as interesting as I thought it would be, but being a responsible “journalist” right now, I’ll tell you. There’s a song called “The Juggler” on the first album, and they said it really fast over and over at a bunch of shows, and it just kind of stuck.

Chaos, the local Juggalo in charge of the hotline, texted me some questions he wanted to ask Violent J. He wanted to know which famous person he would most like to fuck and what position it would be in. The answer is Beyonce, missionary style, so he could remember looking at that shit. I promised not to tell Jay-Z and then had a follow up question of my own. Does Violent J fuck chicks who aren’t Juggalettes? He said he does, because it is more rewarding to know that you spun a chick because she’s into you and not because of your status, but that Juggalettes are fine too.

I also asked about the Eminem beef, and found out he had beef with Kid Rock as well, but that got squashed. They even recorded a song together. They never did a show with Eminem or D12. He had nothing bad to say about the world’s most famous white rapper. Violent J mentioned he did squash the beef with D12, but Eminem didn’t want to officially squash anything, but that ICP actually started the beef. Oh well! Silly rappers.

A bunch of local Juggalos are also into backyard wrestling. So I asked them if they have ever done it. Violent J thinks that backyard wrestling is the shit! But Shaggy 2 Dope can’t really wrestle right now because his neck is hurt.