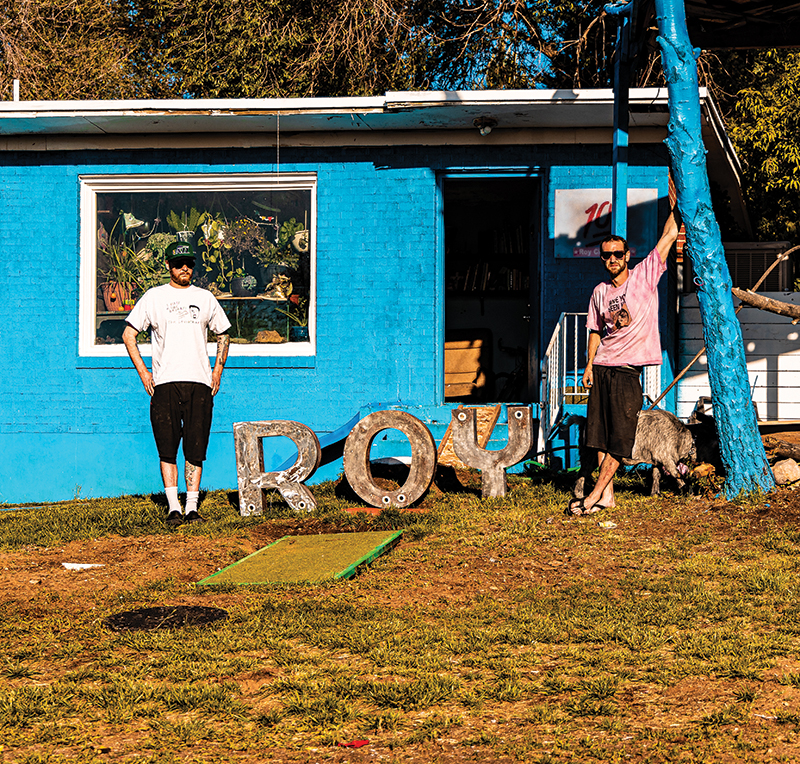 Mike Brown: The Mayor of Roy

For this month’s issue, SLUG Mag decided to travel to the northern bowels of our great Beehive State to explore the underground shenanigans of Ogden and surrounding areas. I tried to get them to rename this particular issue OUG, instead of SLUG, for Ogden Underground. Plus I thought it would be funny to hear people say, “OUG!” Like some kids in a coffee shop saying, “Hey, did you pick up the new issue of OUG?! Shit is fire, bro.”

One such area surrounding our neighbors to the north is Roy. The easiest way to explain Roy to my fellow Salt Lakers is that Roy is essentially Ogden’s Magna. If you have ever been to Magna ,you will know what I mean. Barhopping out there is exceptionally fun. I’ve written about it before. But alas, this isn’t about Magna’s best and only strip club, The Bear’s Den—it’s about a town called Roy and the Mayor that resides.

The house was easy to find because it’s the only all blue house in all of Roy I’d imagine. And not like a cute blue—it’s like an obnoxious, curious, bright blue. An in-your-face blue. Basically it looks like a giant cooler, which is this house’s purpose—there resides the Mayor of Roy.

The Mayor of Roy: A Real Mayor?

The Mayor of Roy is self-proclaimed. His name is Nick, and he is a nice guy. I was curious as to the inner workings of the political structure of the city of Roy. I had questions, like how does one become the Mayor of Roy? Was there any gerrymandering during the election? What political party did you run under? Who was your opponent and did you have any political dirt on them? What hot-button issues does Roy suffer from that you intend to fix? How did the debates go? Where is the Roy town hall?

But all of my questions about the inner workings of a small local government were deemed irrelevant by Nick when I learned that he is the Mayor of Roy because that’s his Instagram handle (@themayorofroy) which he claimed first. It’s a pretty solid ’gram that I suggest following. My favorite part is the goat.

Aside from a blue house painted like an Ultracool 50 cooler (Coleman and Yeti declined sponsorship of the mayor’s house), the Mayor of Roy has an awesome goat in his possession named LaVonne. Now, LaVonne is not the Deputy Mayor—that title is held by Nick’s friend Dan 100, who kindly gave me a warm Gatorade out of his minivan upon meeting him.

Goat in the Big Blue House

No, the goat remains tied in a humane manner in the front yard of The Mayor of Roy’s house, and it’s actually registered with the city of Roy as an emotional support animal. An emotional sup-poat-goat, if you will. I learned a lot about goats from the Mayor of Roy, stuff I didn’t know before, like you cant really housetrain a goat. They just kind of poop all over whenever they want and their poop looks just like Raisinets candy. Also, LaVonne the goat mostly eats oats, but his favorite treats to eat are drywall and cigarette butts. LaVonne the goat is also neutered, although his members have since grown back. I can attest to this because I saw them.

LaVonne doesn’t really do any tricks, yet, as he is still a young goat. He does, however, have an electric collar (not a shock collar—that would be mean) that the Mayor of Roy calls Re-Goat Control. In the near future, Nick the Mayor of Roy would like to enter LaVonne into state fair pageants and maybe tour the world with him.

I asked the Mayor of Roy how the neighbors felt about his blue house and goat that adorns the front yard. His old next-door neighbor, had some problems with it but everyone else is cool. But the cops never get called to the Mayor of Roy’s house, and in fact a cop lives across the street, however, the fire department does. Nick told me that the fire department has been over to the blue house on more than one occasion. Mostly because the Mayor of Roy sometimes lights fires—like burning couches and fun stuff like that.

The sacrifice that the Mayor makes for the city of Roy oftentimes goes unnoticed. But you can be part of the Mayor’s historical work by following his Instagram. Follow him and his great adventures with LaVonne and his dog Wheezy as he documents his pranks, such as putting hundreds of flamingos on his lawn for the hell of it, the time he painted himself green, ond that other time he tried to sell his house as a cooler. Things like that. Hell, maybe one day you’ll see the infamous life of The Mayor of Roy and his land yourself.