00:00 / 16:39
Spotify Stitcher
RSS Feed
Share
Link
Embed
After years of refusing to hold a firearm, I changed my mind a few weeks ago and decided to go to the desert and shoot the shit out of a banana with various assault weapons.

Mike Brown: The Year of the Gun, Goin’ In Hot! 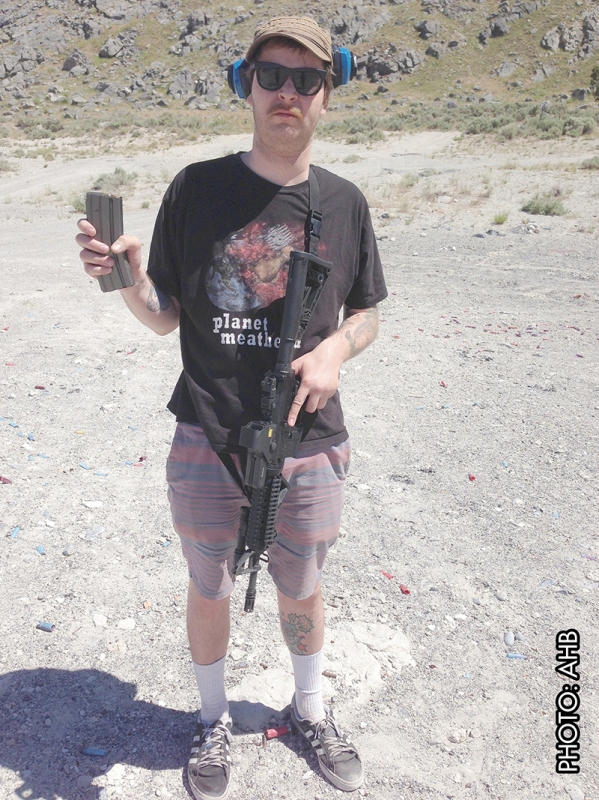 Mike Brown’s gun safety rules mirror those of his penis�god save us all. Photo: AHB
I’m not sure who coined the phrase, but due to all the recent public shootings, 2013 has aptly been nicknamed “The Year of the Gun.” As far as constitutional amendments go, I’m more of a First Amendment guy than a Second Amendment guy. I prefer the one that gives me the right to say and write whatever the fuck I want, as opposed to the one that lets us ‘Muricans pack heat.
With the NSA keeping tabs on all our info and dick pics, I don’t think any of those rights matter anymore. That being said, after years of refusing to hold a firearm, I changed my mind a few weeks ago and decided to go to the desert and shoot the shit out of a banana with various assault weapons. You know what? It was pretty fun. I’ve always liked breaking things and blowing stuff up, and shooting guns reminded me a lot of lighting off fireworks, or the time I broke all my dishes at 3 in the morning and posted the footage on YouTube.
There are several reasons why it’s been so long that I haven’t shot a gun. It’s not so much that guns creep me out—I guess it’s more the people I always see who have them—like cops or my Republican family. My family loves guns. Every Thanksgiving, they invite me to the desert to go take a crack at some targets, but I get afraid one of them might shoot me, and there goes my chunk of the will, so I usually skip out.
My friends with guns don’t want to take me because bullets are fucking expensive these days. I can’t say I blame them—my friendship is appeased easier with a shot than with a shoot. Since alcohol is much cheaper than firearms, sometimes I wonder why our country doesn’t settle more disputes with it. Think about it: What if, instead of invading Iran or Afghanistan, we just went down there, opened up a bunch of titty bars, all got wasted together and squashed our beef? Oh, yeah, Muslims don’t drink. I guess they can hang out with the Mormon soldiers while the rest of the world has a great time.
Another reason I don’t pack a pistol is because my need for killing things is easily satisfied by my Xbox. When they blame school shootings on video games, I don’t get it. In my fucked-up brain, the violent games prevent such behavior—get it out of your system with your system. The more time you spend playing your PlayStation and jacking off, the less time you have to plot how to kill your principal. Isn’t that what normal teenagers are supposed to do anyway, these days? Push buttons and beat their meat?
I guess things have changed since I was in junior high. I stopped getting bullied in eighth grade when I started doing drugs. Drugs were a great solution to my bullying problem, because now I was hanging out with all the bad kids that the bullies were either one of or afraid of. I despise the school shootings as much as any other rational human, but you gotta think, these days, it takes some serious balls to be a school bully. Being that asshole jock can now get you a hole in the head. So think twice before delivering that next wedgie, kids. As far as bully prevention goes, if I were a teacher, I’d just show my students the Columbine footage over and over again.
I learned a lot about guns and how to use them on that sunny afternoon in Grantsville. My shooting instructor asked me what I knew about guns and gun safety, and if I knew the four golden rules of using such mechanisms. When asked the first rule, I replied with, “Don’t shoot anybody?” Wrong. As far as I knew, that was the only rule of gun safety. As long as we all leave the desert with no holes in us (other than the women that were there, zing!), then we followed all the safety rules, in my opinion.
Here are the actual rules I learned. Rule Number One: All guns are always loaded.
Rule Number Two: Never let your muzzle cover anything you’re not willing to destroy.
Rule Number Three: Keep your finger off the trigger until your sights are on target and you’re ready to fire. Rule Number Four: Be sure of your backstop and beyond.
I’m going to make my penis follow the same rules from now on: My penis is always loaded. Never let my penis cover anything I’m not willing to destroy. Keep my finger off my penis until I’m ready to fire. Be sure of my penis and beyond.
Apologies to my gun-nut friends, but I don’t remember all the different kinds of guns I shot, and I didn’t make much of a point to because they all did the same thing—they shot shit—assault rifles, a Glock, a .22 revolver, and my personal favorite, the shotgun. Prior to going to the range, to me, “shotgun” meant the only way I could ever have a wedding or the best way to drink a beer.
All in all, shooting guns was fun, and I now accept it as a legit recreational activity, as long as you follow the same rules as my penis.
Photos: