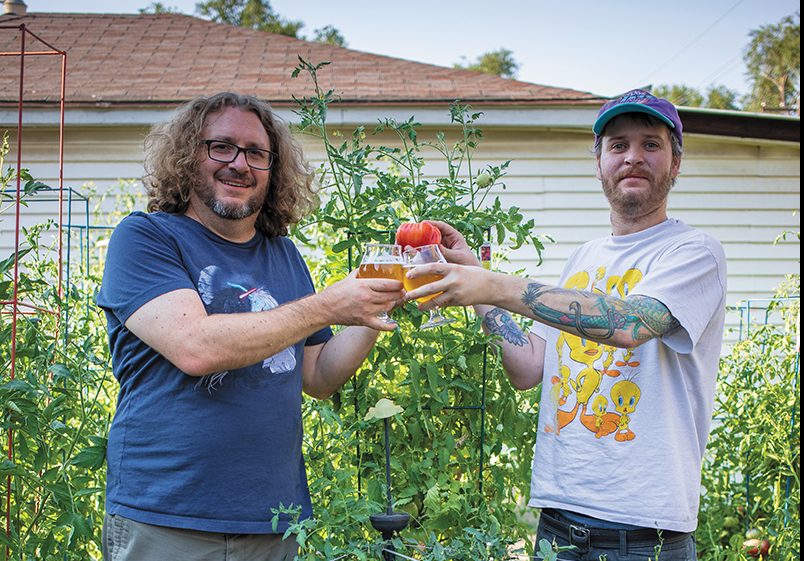 For this year’s episode of the Food Issue, I had the great opportunity to interview my friend Circus Brown all about tomatoes. You may know Circus from his awesome KRCL Friday-night radio show, “Not a Side Show,” but what you probably don’t know about him is Circus’ crazy obsession with a red, round fruit. He likes tomatoes more than any human I’ve ever met. So we went to lunch, got drunk and talked about tomatoes.

I, myself, have an affinity for tomatoes. I have hosted two Mike Brown Fests at Urban Lounge where I sold tomatoes at the door that people could throw at my band, The Fucktards, while we played. People throw other shit at us when we play, so I figured why not make some money off of that and charge a dollar for each tomato that you could pelt at me? I honestly made more money off of tomatoes than I did for the door cover those nights. Circus actually provided me with some of his awesome tomatoes for those shows. They did not go to waste.

The first question I asked Circus is if he’s ever seen Attack of the Killer Tomatoes, a cult-classic movie for sure. If your hipster ass hasn’t seen it, well, you just ain’t cool. We indulged—for a few minutes—in discussing the subtle nuances of this fine movie,  then, got into a serious discussion about tomatoes.

Currently, Circus’ tomato garden yields roughly two pounds of red righteousness a day. I asked him what he does with all of those tomatoes. He mostly makes pico salsa and then puts it on everything he eats. He also makes tomato sauce and pickles, and dehydrates a bunch of his tomatoes, too, which he uses as currency at local craft breweries, which he is fond of. The dehydrated tomato is basically tomato jerky, which should prove handy for the zombie apocalypse. Dehydrated tomatoes are also pretty epic in a BLT, according to Circus—they elevate the crunchiness factor, for sure.

We also discussed green tomatoes. Circus has never actually seen the movie Fried Green Tomatoes, but was still very knowledgeable on the subject. Green tomatoes need to be fried. To me, tomatoes deserve to be red and not green. But Circus assured me that they are pretty good.

I got personal with Circus during this interview about tomatoes. I asked him how his wife feels about his obsession. Like, was this a deal-breaker when they started going out? Fortunately, it was not. She loves tomatoes a little less than Circus does but is OK with his obsession.

As far as the best way to keep a tomato happy, Circus told me that hand-watering your tomatoes means a lot to them. They know when you are going the extra mile. Also, good mulch, eggshells and coffee grounds will do wonders for a tomato’s spirit while they are just hanging on a vine, waiting to be murdered for your pico sauce. No one likes a sad tomato, so keep them happy.

I asked Circus about why tomatoes split sometimes. Are they growing too fast and don’t know their own strength? He said that it could have to do with your watering schedule. And you don’t want to stress them out. Tomatoes are sensitive sometimes.

I also wanted to know if Circus had ever grown a tomato so rad and special that he couldn’t eat it. The answer is yes. He grows Olympic-sized tomatoes called Olympic tomatoes that are so epic, you either preserve them in wax or enter them into the state-fair tomatoes competition.

Now the ultimate secret to the success of Circus’s tomato garden: drumroll please … fish water! Yep, fish shit does wonders for tomatoes. Who would have thought that fish shit and tomatoes go hand in hand? Circus just uses fish-shit water from his aquariums in his basement next to his bong. Bong water would probably work, too—but yeah, tomatoes love fish shit. And I love tomatoes.