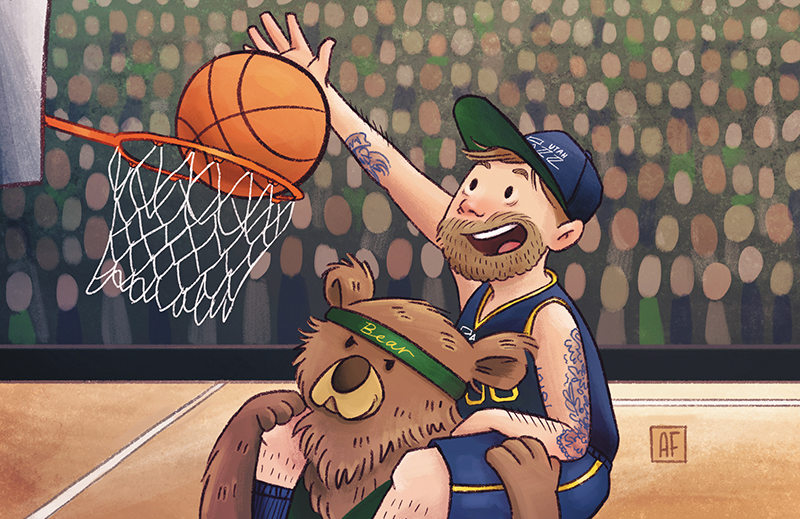 With the Jazz season approaching this month, it’s time for me to make my annual season predictions. After last season’s heroics, there’s a genuine excitement about this team locally, while the national media continues to write us off—which is actually a good thing. I don’t want anybody to see us coming when we kick some ass in a dominant Western Conference. But I will take some time to fill everyone in on some Utah Jazz shit that I think will go down. I’ve made some of these predictions before, and while I’m no Nostradamus, a few of my prophecies have come true.

My first prediction is that Donovan Mitchell will have some proverbial skeletons in his closet. Think about it: The beloved rookie/sophomore-to-be is too good to be true. And when something is too good to be true, it is. That being said, I bet that we find out something terrible about the kid this season—like that he’s a Lakers fan.

Another prediction I have is that the Jazz Bear, one of the best mascots in sports, will lead the charge for legalization of marijuana in Utah. I feel like there’s no way that bear isn’t not high as shit all the time. This will come with the help of Thabo Sefolosha, our backup power forward who got popped last year for puffin’ tough, filling the arena full of purple haze in an effort to improve Salt Lake’s shitty air quality.

Speaking of the Jazz Bear, I predict that proud NRA member, avid hunter and ex–Jazz player Karl Malone will accidentally shoot the Bear à la Dick Cheney. And I’m predicting this will happen on the night of the return of the NBA’s most popular white nationalist, Gordon Hayward.

This is why I think this will happen: First off, I’m not mad at Hayward for leaving the Jazz. I never liked him much anyway, and I wasn’t surprised, either. But yeah, he’s still rocking the Hitler Youth haircut and will probably be endorsed by New Balance this season (he donated to 45’s campaign). I have little question about where this Benedict Arnold falls on the political spectrum.

I predict that on the night of Gordon’s return—amid the sea of boos in the arena raining down on him—there will be plenty of cheers for him outside of the arena by stupid white boys carrying tiki torches. This is where I believe Karl Malone shoots the Jazz Bear either by accident or as a pro-NRA statement that bears are dangerous and we need to protect ourselves.

Speaking of white nationalists and basketball, our new rookie, Grayson Allen, looks so much like Ted Cruz and plays so dirty, BYU fans everywhere are going to love him. If you Google this kid, all that comes up is him spending four years at Duke tripping other players. My prediction for Grayson is how many dudes he is actually going to trip this year. I predict 12 (this is a serious prediction). How many technical fouls will our little Grayson get this year? I predict 16. How many times will other Jazz players come to his defense and say he was just playing tough in post-game interviews? I say that happens about 30 times. God bless our new little Bill Laimbeer.

Who knows? Grayson can actually hoop and might actually be awesome, but I’m convinced that we drafted him because of how much Ricky Rubio was beat up by other players last year. If you don’t know, Rubio was cheap-shotted like three games in a row last season, so my theory is that Grayson’s face is so much more punchable to opposing players than Rubio’s beautiful, god-like visage. And I seriously predict that Rubio is gonna have a great season. So, it was smart of Jazz management to draft someone to get punched instead of Rubio.

Speaking of Rubio, I predict that he and his hipster man bun will get suspended at least one game by the team for pounding Fernet Branca and Spanish malbec before practice—much to Coach Quinn’s chagrin—thus rendering him a little useless running the offense.

Some other quick predictions:

Dante Exum breaks in half and spontaneously combusts the first game of the season. The injury bug just loves the taste of this kid.

Joe Ingles stops talking shit to opponents on the court and takes a literal shit on the court. But cut him some slack—he’s Australian.

Rudy Gobert remains tall. Because he’s tall. [Editor’s note: Mike Brown just wants at least one of his predictions to be right.]

Coach Quinn gets caught shoplifting, and Jerry Sloan beats him up. I don’t know why I think this one could really happen, but a man can dream.

The Millers apologize for stealing DJ Juggy’s set list that’s being played during all the games.

And my last prediction? Alec Burks gets traded.

Needless to say, I’m way excited for this next Jazz season, though this article probably wont help my chances of ever getting a media pass again.