With the spirit of Craft Lake City bubbling about Salt Lake, I decided to make this article about my own crafting exercises. I am by no means a serious crafter, despite my rich Mormon pioneer heritage being all about it. They were also into polygamy and killing Indians and shit like that, so I don’t really care if I don’t take after my ancestors. 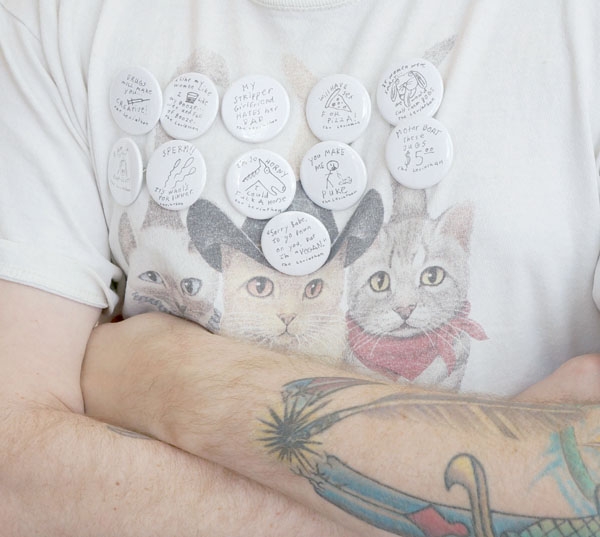 Mike Brown has a pin for every occasion and situation you will ever find yourself unfortunate enough to be in. Photo: Eliza R. Snow

With the spirit of Craft Lake City bubbling about Salt Lake, I decided to make this article about my own crafting exercises. I am by no means a serious crafter, despite my rich Mormon pioneer heritage being all about it. They were also into polygamy and killing Indians and shit like that, so I don’t really care if I don’t take after my ancestors.

In more recent American culture, I would say that crafting begins in grade school. Aside from going out to recess three times a day so the teachers can get some smoke breaks in and hit their flasks, arts and crafts time seems to be the one subject all little kids can enjoy. This allows the teachers to zone out and reflect on why the fuck they took on the lowest paying and most important job in our society.

As you get older and move into junior high and high school, arts and crafts take the form of home ec. for the girls and closeted gay boys, and shop class for the boys and future flannel girls. Coming out in high school can be brutal. Maybe Utah’s current school system established these waste-of-time courses just to help kids determine their sexual orientation? God knows how much this state’s school system hates sexual education. I didn’t realize that a condom wasn’t a water balloon until way after high school, and the first time I finger-blasted a chick, I wrapped five rubbers on my left hand, one on each finger—ya know, just to be safe.

That being said, I opted for shop classes in high school. Shop class mostly consisted of me and all my stoner buddies in an unofficial competition to see who could make the coolest bong and pass it off to the teacher as a flower vase for our moms or a sweet pencil holder. The only time I ever made anything of actual use in a shop class was my senior year, when it took me a full semester to make a wooden clock.

The clock turned out like complete shit—misaligned joints everywhere and a bad sand job. It made the perfect Father’s Day gift, and my old man loved it, flaws and all. That’s when I learned you don’t have to spend money on gifts for people. People are stupid and feel all warm and fuzzy when you craft things for them. I prefer cash as a gift, though, something my parents realized about me in recent years. Since they are smart and don’t like to shop for me, they just mail checks on my birthday—it’s awesome.

After high school, I began my zine, and I would consider this its own brand of crafting. Just like shop class in high school, I usually get really high before I make one, use a lot of glue and tape, and like the clock I made, my zine is always full of mistakes, grammatical errors and misquotes. Going to Kinko’s drunk at three in the morning and hearing the rustling of the copy machine as I collate is oddly one of my favorite activities.

The party was also BYOB and BYOP, and this is what I learned: Chicks love crafting as much as they love porn—combine the two, and girls will show up to your party.

My most recent adventure into the world of arts and crafts has been the wonderful investment I made a few months ago in a new button maker. Getting zonked out in front of the TV and crafting branded buttons has become my new favorite hobby. I basically think of something fucked up, write it on the button and maybe draw a little vagina on there or something.

I’ve been trying to sell them, but mostly I’ve just been taking the buttons to the bar with me and trading them for shots and using them as an excuse to talk to drunk girls. I’ve found that giving a girl a button that says, “Hey Asshole, find my clit and suck it,” is a ridiculously great icebreaker.

I made over 70 styles of buttons this last month, each in black and white, but unique, like a fucked-up, smog-filled snowflake. If you want some, email me or go to Mike Brown Fest at Urban Lounge on August 30! Or find me at your local tavern and buy me a shot.