Accidents happen in life. You can’t get mad at them or avoid them. Cars crash, people trip and fall, my favorite pair of pants gets diarrhea-ed, meth labs explode and condoms break. I guess that’s why whenever I hear one of my friends slipped one past the goalie, I have the same reaction as if I had just heard they fell off a cliff: “Oh, fuck!” 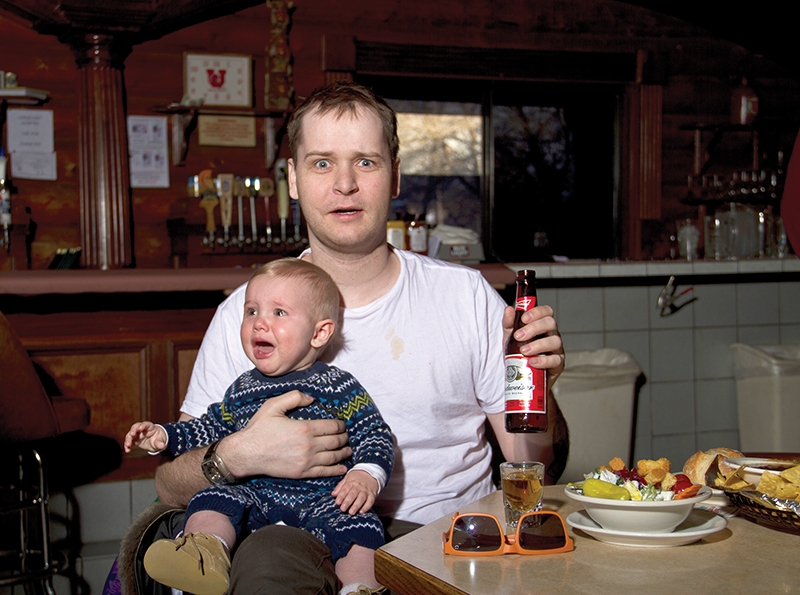 This photo of Mike Brown and a borrowed baby is sure to encourage abstinence … and a call to the DCFS. Photo: Jake Vivori

Much like I described losing friends to mortgages and marriages in my February article, I have lost a friend or two to a baby. I don’t get bitter towards babies for not being able to kick it with my buddies the same way I would be mad about them choosing housework or their wives over me, though. Mostly because they choose to get locked into a mortgage with a great APR and decide to get married. Most of my friends who create another human with their respective penises didn’t really choose it. The kid was like a 50-car pileup on an icy I-15 freeway: an accident.

Accidents happen in life. You can’t get mad at them or avoid them. Cars crash, people trip and fall, my favorite pair of pants gets diarrhea-ed, meth labs explode and condoms break. I guess that’s why whenever I hear one of my friends slipped one past the goalie, I have the same reaction as if I had just heard they fell off a cliff: “Oh, fuck!”

I wonder what the statistic is for planned spawning versus sexual mishaps? Even big Mormon families seem to always have that one youngest kid who’s, like, seven years younger than the rest of their siblings. I’m surprised Republicans haven’t sponsored a study on accidental births, reason being it would strengthen a lot of stupid political stances in my opinion. I can hear Orrin Hatch saying now, “Oh, you want free healthcare? Well, you weren’t supposed to be born anyway, so go get fucked!” [Editor’s Note: SLUG is not responsible for the political validity of this statement.]

My gut feeling tells me that more than half of all babies were accidents: not unwanted, but unplanned. That’s right, I believe that half of all humanity are fucking accidents. I mean, seriously, I hear that raising kids is hard work and goddamn expensive—who, for fuck’s sake, would plan on that? [Editor’s Note: According to a Google search, Mike Brown’s statistic is actually accurate, as 49 percent of pregnancies are unplanned.]

Babies are usually pretty warm and cute, though. So, if you like warm and cute and expensive things, I could understand wanting to have one. If not, use a condom! Walk into Planned Parenthood and get on birth control!

Do people still stash their kids in a giant Easter egg basket and doorbell ditch an orphanage or convent? That could be a great pro-abortion ad campaign. Instead of the coat hanger with the little cross out sign, a slogan saying something like, “There are only so many doorsteps that will take your baby off your hands without filing criminal charges. Choose abortion instead!”

All this aside, though, the older I get, the more I think I could or should have kids. When I was younger, I thought that I never wanted little Mike Browns. I don’t know why I feel this way—it’s not like I’m a girl and my biological time-bomb clock is ticking. I could put my sperm in my freezer and use it when I’m 70 if I feel like it.

Nowadays, the thought of a couple little Mike Browns running around pissing people off warms my heart a little bit. Since owning my cat, Jet Pack, I’m sure I can handle the responsibilities of having a baby. I think I’ve got the basics down, which are don’t drop them and don’t shake them. I’m sure I can Google how to do everything else if I have any questions, or ask one of my Mormon sisters—they’ve all had tons of babies.

As far as I can tell, all babies really do is poop themselves, cry, drool, eat applesauce, giggle and sleep whenever they want. It sounds just like what I put up with living with Mike Abu. I can totally handle this. Whenever a baby does any of these things, I just have to make a silly face at it and it will stop, right? And I’m great at making silly faces. This is going to be too easy for me.

The hardest part of having a baby, for me, is finding a chick who is willing to have my baby. All the shit I have to do leading up to actually making a baby has got to be way harder than actually raising the baby. Like going on dates (ugggh!) and falling in love and all that shit? For me, a baby will probably just have to wait, because, at the rate I’m going, this could take a while.