SLUG Mag Soundwaves
Episode #403 – Mykah
00:00 / 21:59
Spotify Stitcher
RSS Feed
Share
Link
Embed
I wholeheartedly believe that sports and drugs go together as seamlessly as a U-lock in a hipster’s back pocket, subtly slipping down and caressing those supple yet firm, trust-funded buttocks. 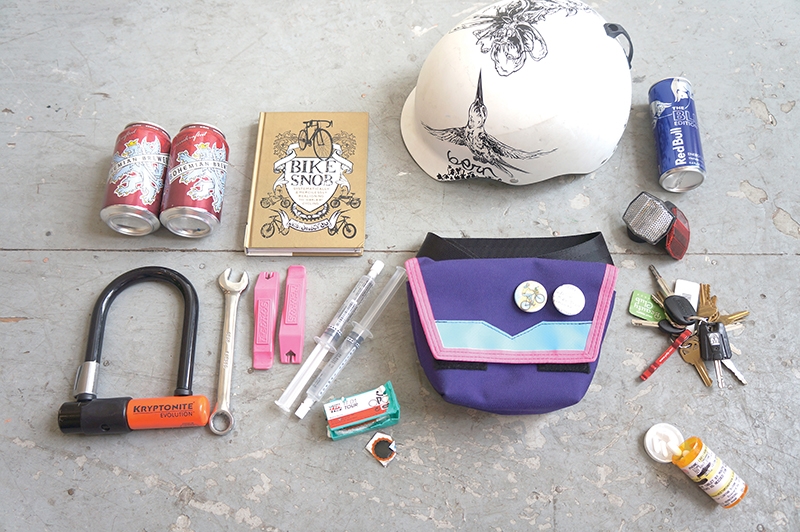 No true cyclist’s gear is complete without a bottle of pills and some beer and Red Bull to wash ’em down, according to Mike Brown.
We don’t do a lot of themed issues here at SLUG, so I get pretty excited when we do. The beer issue that we put out every year is probably the easiest prepping I ever have to do for an article. It’s the one time I can admit to writing my column drunk (and the copy editors just have to deal with it) instead of denying it like usual—hence all the typos and slurring and whatnot.
I feel the same way about the bike issue because, to me, it might as well be the drug issue. I wholeheartedly believe that sports and drugs go together as seamlessly as a U-lock in a hipster’s back pocket, subtly slipping down and caressing those supple yet firm, trust-funded buttocks. Don’t believe me? Just take one look at the best cycling athlete of our generation, Lance Armstrong, and tell me I’m wrong.
Before I write more about three hobbies I love—drugs, bikes and sports—let me explain why I hate Lance Armstrong, because I don’t hate him at all for using drugs. Everyone he was racing against was on the same fucking drugs—so fucking what? I hate Lance Armstrong for having sex with Sheryl Crow. I hate Lance Armstrong for making those stupid rubber bracelets popular. I hate Lance Armstrong for having one nut. I hate Lance Armstrong just for seeming like he would be a dick, even though I don’t know him at all. But I don’t hate him for taking drugs.
If you are an artist or a rock n’ roller, it’s pretty much expected of you to take drugs to enhance how good you are at your profession, and you are even idolized for it. All of my favorite writers are dead, mostly because of drugs, and it’s more than safe to say that drugs made them better writers. I personally feel that my own writing has been sucking lately because I’m not doing enough drugs.
But if you are an athlete who takes drugs, you are suddenly a cheater for it? I don’t understand. I know that drugs are bad and blah, blah, blah, and I could sit here and argue prescription drugs versus marijuana and all sorts of other boring debates that, quite frankly, I don’t feel like writing about right now. My personal opinion is that whatever a human decides to put in his or her body is his or her business, whether it’s the kind of food they eat, the number of dicks they take or the drugs they do.
I’m adamantly against drug tests in the workplace. If one of my employees is high on crack, but is selling his ass off and showing up on time, I don’t really care if he’s sucking a glass dick on his lunch break. If you are so clueless as to what your employees are doing drug- or alcohol-wise, that you have to have them piss in a cup, then you are just a bad and lazy manager who has no idea as to how your business is running in the first place. As if the people in charge of the big bike race that goes across France had no idea that hundreds of top-notch pedal pushers were doped up. Yeah right.
I want to see athletes with swollen heads perform at an inhuman rate while sacrificing their long-term health, and I don’t think I’m alone, if sports fans would actually be honest with themselves. Besides, I think the whole drugs in sports problem could be solved really quickly if I was commissioner of a major sports league. Let’s pretend I’m in charge of baseball, notorious for its steroid era of the ’90s. I would simply start an extra league called the D-League, but unlike the NBA’s D-League, where the “D” stands for “Development,” my “D” would stand for “Drugs!”
The rules of the D-League would be simple: No drug testing—for any drug, whatsoever. In fact, you can join the D-League sober as a Mormon without access to prescription drugs just to see how you stack up—pretty much like Ken Griffey, Jr. in the ’90s—but you can use any drug you want. If you don’t know who Dock Ellis is, you should Wikipedia that guy right fucking now. He pitched a no-hitter while fucked up on LSD for the Pirates back in 1970. That means real acid, not this pussy knockoff shit the kids are dropping these days.
Dock Ellis would be in my Drug-League hall of fame—so would Jose Canseco. He’s totally out of his mind and has no problems admitting to the world that he juiced it and shot up tons of other teammates in their tushies with ’roids. In fact, he wrote a book called Juiced. Hell, I’d put Lance Armstrong in my Drug-League hall of fame. That man did more with half a nut than I’ll probably ever do.
Bottom line is this: Drugs, bikes and sports go hand in hand no matter what. The best way to sell drugs is on a bike. Your chances of getting pulled over go way down. What better way to peddle than with pedals
Photos: