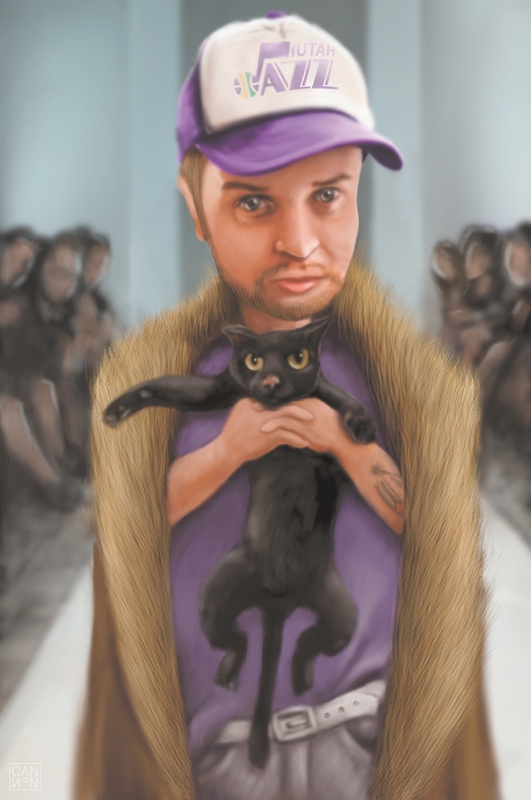 For the most part, I try to write about things I know, which is why I’ve brought you such fine and profound periodicals with titles such as, “Puke!” and “How to Stalk Your Ex-Girlfriend.” This month, though, I chose to write about fashion, which, if you’ve ever seen my closet, is obviously a topic I know nothing about. I still get dressed in the dark, and my wardrobe consists of vintage Utah Jazz gear from the DI and the occasional pair of pants from The Stockist. Good thing I’m constantly neck deep in runway model pussy, so hooking up an interview with a Vogue (Australia) cover model to discuss fashion and Fashion Week (going on this month in NYC) was no problem. By the way, if Florida is America’s penis, then geographically speaking, the whole East Coast is America’s choad and New York is appropriately the butthole—a perfect place for the fashion industry, if you ask me.

Australian runway model Myf Shepherd was kind enough to address fashion and modeling, and helped me grasp the important concepts of the two.

MB: My editor specifically asked me not to ask you any questions about cocaine, so I wanted to know how much cocaine you do before you take the runway?
Myf: Um, in the entire day? Or the moment before?
MB: Well, is that a fair or true stereotype?
Myf: I don’t think it’s actually that true, but one time, there was a port-o-potty backstage and someone had actually written, “Do coke here, throw up here” on it … It was very helpful.
MB: So this graffiti artist was like, “I know all you models are coked up and have eating disorders, so let me help you out a bit.”
Myf: Well, yeah, assuming we could read.

MB: When I was a kid, I was in drug rehab with a girl who was a model, and one of the rules there was that the girls couldn’t wear makeup. She looked nothing like her portfolio—is that common?
Myf: Yeah, no one does. If you met a famous model, you wouldn’t even know it.

MB: I really like cats. Why is it called a catwalk?
Myf: Because, traditionally, models were actually cats—like the body type, the strut and the arch in the back.

MB: Are runway models the same chicks that are in the magazines?
Myf: If you are a model, you have to do all that stuff to get paid—you don’t get paid for walking down a runway.
MB: You don’t get paid for that?
Myf: No, they give you some clothes and then you sell them.

MB: Do girl models hang out with guy models that much? Or is it kind of like how lesbians don’t hang out with gay dudes very often?
Myf: Yeah, I guess. I actually feel sorry for male models.

MB: How many models does it take to change a light bulb?
Myf: We actually had this problem at my house the other night. I would say three: one to be the ladder, one to be the instructor and one to actually do it—but we couldn’t actually do it.
MB: So you just sat there in the dark?
Myf: Yeah, until my boyfriend got home, then I made him change it.

MB: What’s the most embarrassing thing you’ve seen as a model?
Myf: Well, my first season, I was in a show where, like, four girls fell, and one of them was my friend—she fell like four times. The audience was super close to the stage and they kept pushing her back on the stage.

MB: Fashion Week is coming up soon. What is your perspective of it?
Myf: It’s a month of straight torture. Your day starts at 6 a.m. and ends in the late hours of the night, then you have to go to London and Paris and do it all over again. If you are making modeling your career, you have to do it.

MB: What other questions would you like me to ask you?
Myf: I don’t know, people ask me for diet tips or what kind of makeup I wear.
MB: You could tell them to do that diet that a lot of girls do where they can eat whatever they want as long as they shove their fingers down their throat afterward.
Myf: Exactly, just like the sign in the port-o-potty.

I learned a lot about modeling from this interview. I also learned that Myf is dating a drummer, which I would naturally assume is career suicide for a model, but I did tell her that I would plug her BF’s band in our mag. The band is called Weird Womb, and now that you are done reading this article, go ahead and Google that after you are done Googling Myf.