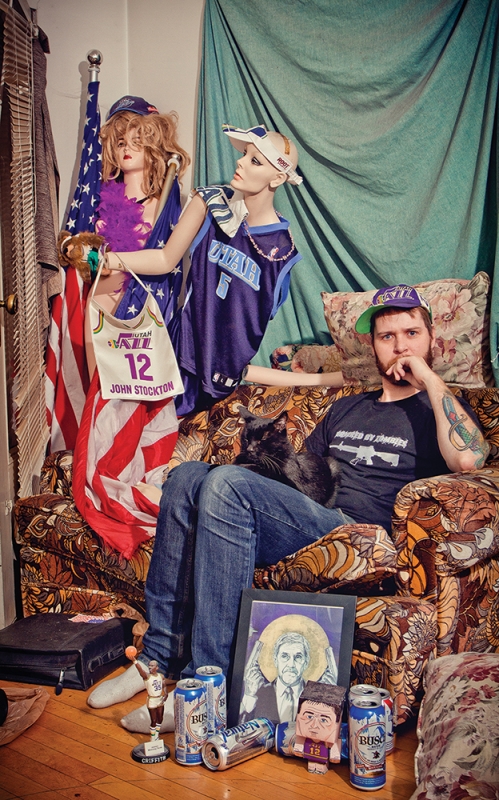 If you know me at all, you know it’s safe to say I’m somewhat of a narcissist and only truly care about three things in life: my cat Jet Pack, free drinks and the Utah Jazz. Well, four if you count Grand Theft Auto V—I’m a sucker for any video game that lets you bang a hooker, kill her and then take your money back. But this article isn’t about strangling cyber-hookers—it’s about the Jazz and what we can expect from our state’s only professional sporting organization. (Sorry, all you bandwagon soccer jocks: RSL doesn’t count as a pro sports team, in my opinion.)

Prediction #1: The Jazz will suck massively this year and you just have to deal with it. When people ask me what I’m most excited about seeing out of our hot, new, young team, the answer is quite simple: It’s the new Jumbotron installed in the Delta Center (I will never refer to the house that John and Karl built by its new, shitty name). It’s about fucking time we caught up with the rest of the league and got some decent scoreboards, though the scoreboard is going to be painful to watch this year. But the Kiss-Cam will finally be in hi def, and should be more entertaining than what’s going to be happening on the court. People keep talking to me about the team tanking to take advantage of next year’s supposedly awesome draft. Here’s the good news: The Jazz aren’t going to tank—they will just be plain shitty. Even gooder news: The Lakers are going to suck this year, too! Don’t be surprised if Kobe Bryant sits out the whole year and starts raping people again.

Prediction #3: Dennis Lindsey will be exposed as an actual KKK Grand Wizard. If you don’t know who Dennis Lindsey is, he’s the new general manager that Greg Miller hired to put this shitty team together. If you’ve ever heard him talk, you know what I mean. His demeanor is creepy as fuck, and I suspect that he is actually a KKK Grand Wizard. As the “once awesome rapper turned supershitty actor” Ice Cube once said, “The KKK wears three-piece suits.” Lindsey is currently getting a ton of accolades for essentially getting lucky on draft night to nab a micro-sized point guard who is going to have a terrible year. He is probably motivating all the rookies by telling them that if they don’t perform and make him look good, burning crosses are going to start showing up on their front lawns.

Prediction #4: Tyrone Corbin finally stops being such a pussy of a coach and shoves a ref. This is one prediction I’m really hoping will come through. With Jerry Sloan back in the organization mentoring Tyrone, hopefully he will stop being such a pussy. I’m really hoping Sloan’s going over important in-game details with Ty, like how to call a ref a motherfucking cunt without getting a technical, and how to make fun of Jerry Stackhouse. I don’t necessarily think Ty is a bad coach—it’s not his fault the team sucks and he had dog shit to work with last year, but he does need to toughen up on the sidelines. If anyone can do that, it’s Jerry. Hopefully, Ty will start smoking Winstons and pound some Miller High Lifes like Jerry used to do. That kind of off-court behavior can only make you tougher.

Prediction #4: Team Captain Gordon Hayward gets suspended for smoking meth and starts getting shitty tattoos. The new face of the franchise, Elder Hayward, finally gets sick of his missionary-looking image and just snaps. G-Money, as I like to call him, takes advantage of our state’s ample crystal meth supply and shitty walk-in tattoo shops on State Street and uses his pale white skin as a canvas for garbage. The last player to do this was Chris Andersen, and now he has a championship ring—and an apparent problem with child porn, but let’s hope Elder Hayward can stay away from that.

Prediction #5: Larry Miller announces that he’s not actually dead, but faked his death because he was sick of being the most important Utahn since Brigham Young. Sick and tired of being an icon in our great Beehive State, Larry Miller faked his death. Anyone as rich as him has access to the secret government cures for diabetes and AIDS. Tired of seeing his son turn a once-stable franchise into a farm team for Miami, L.A. and Brooklyn (which is where our core four hopes for the future will be playing when their contracts are up), Larry’s coming back to life to ground Greg and turn things around. I really hope this one happens, or Jazz Nation is totally fucked in a few years.