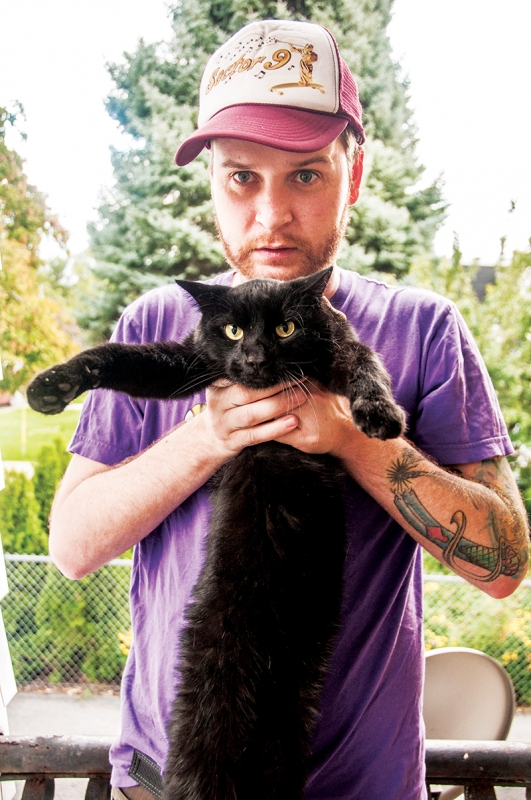 If you follow any of my social media channels, then you already know about my affinity for my cat, Jet Pack. Since I paroled Jet Pack from the kitty prison, or Humane Society—whatever you wanna call it—I have become like most crazy cat people: a bit obsessed with my pet who has become not just a pile of kitten guts covered in black fur, but an extension of myself and my own life.

Jet Pack’s birthday is this month, so I thought it would be cool to get him a pet psychic reading to see what he would like for his birthday, and pick his brain about some other things, like why he’s been barfing so much lately and where he poops. I let Jet Pack come and go as he pleases outside of my apartment, so now I don’t even own a litter box. It’s like he knows I’d be too lazy to clean it regularly.

I got ahold of Patty the Pet Psychic, and she agreed to come over to my messy abode to give Jet Pack a reading and talk about what she does. I didn’t tell Patty anything about my and Jet Pack’s relationship, and right off the bat, she was able to crush any doubts I may have had about the authenticity of her craft by telling me things about Jet Pack that I knew but she didn’t, until she met him.

Such as: He likes to go outside and fuck with other cats, we are best friends, one of my neighbors is feeding him table scraps, and he doesn’t have a girlfriend at the moment. But ladies, if you are interested, Jet Pack is neutered. Jet Pack is also very territorial and has my block locked down, but Patty was also able to tell me the exact territory. He won’t go past the alley behind my apartment, and he understands the whole “not-getting-run-over-by-a-car” thing, which is important to any cat’s nine lives.

As far as Jet Pack’s barfing and all-around health goes, Patty assured me that he is very healthy and active, and that he was puking because he doesn’t like Friskies anymore. I have since switched cat foods, and he hasn’t heaved since. That’s one less trip to the vet I have to make. Sweet! Also, it’s OK for me to continue to let Jet Pack drink out of my toilet.

A lot of what Patty does is interpreting a pet’s bad behaviors for people. Like, if your dog is chewing the shit out of all your furniture, she can tell you why and what you can do to fix it. Since Jet Pack is pretty much purrrrr-fect and doesn’t have a lot of pet peeves, I was more interested in where he came from before the shelter and other random stuff.

Jet Pack was born feral, which makes sense, seeing how much he likes to kick it outside. He doesn’t have a lot of memories before the shelter, but who would have known that we both have dad issues? No wonder we are so close. Jet Pack’s favorite color is neon yellow, so Patty said he would like a blanket of that color. That’s what I’ll get him for his birthday.

About a year ago, Jet Pack got in a street fight and I had to get him stitched up a bit. I asked Patty if she knew who he was fighting and why. She asked Jet Pack, and he said it was some stupid, orange tabby that lived in one of the houses in the alley behind my apartment. Like most gang fights, it was a beef over territory. She assured me, though, that Jet Pack definitely won the fight and established his dominance as the alpha cat of my parking lot.

At this point, I decided I didn’t want to know where Jet Pack poops—in case I get confronted by an angry neighbor, I can just play the ignorant card. Besides, I think where someone handles their business is exactly that: their business.

Patty can do a lot more than just read my cat’s mind—she reads all sorts of animals: horses, llamas, ferrets, snakes and one time, she even read a spider, but it didn’t have that much to say. I asked Patty if she ever goes to the zoo, to which she promptly said, “no.” She said most of the animals there are insane from their prolonged captivity. The same goes for aviaries.

If you want to get ahold of Patty for a pet psychic reading, I highly recommend it. You can contact her through her website pattypetpsychic.com or call 801-503-2599. Jet Pack had a great time getting some of his furball feelings off his chest and working through some of his own issues.

In case you are wondering, at this point, just what kind of cat owner I am, Patty assured me that Jet Pack is very happy living with me and he has no complaints. Even when I come home drunk, Jet Pack is cool with it, but he can tell when I’m wasted. Patty said that Jet Pack and I were meant to be together, and although I already knew that, it’s nice to hear it from a pet psychic.