My band, The Fucktards, is nearing 13 years old. Like most bands that have been around over 10 years or so, we’ve changed. Dare I say, “progress”? In the case of The Fucktards, I realize that’s pushing it. These days, a Fucktards show consists of us dressing up stupid, getting beer and other random objects thrown at us and playing the same seven songs over and over again, until we are asked to stop. So, I want this article to give you lucky readers the origins and beginnings of The Fucktards. 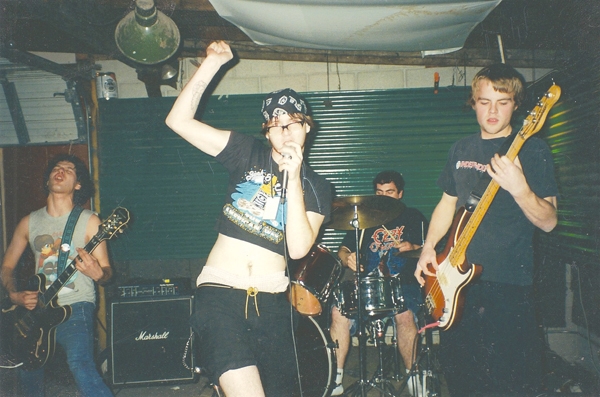 My band, The Fucktards, is nearing 13 years old. Like most bands that have been around over 10 years or so, we’ve changed. Dare I say, “progress”? In the case of The Fucktards, I realize that’s pushing it. These days, a Fucktards show consists of us dressing up stupid, getting beer and other random objects thrown at us and playing the same seven songs over and over again, until we are asked to stop. So, I want this article to give you lucky readers the origins and beginnings of The Fucktards.

The original members were Dan Rose on guitar, Joe Guile on drums, Paul Callis on bass and me as the frontman. Joe and Dan were seasoned musicians, even at that time. They played in this rad hardcore band called The Crohnies, and, embarrassingly enough, before that, they were in a Provo ska band called The Pastry Bandits, who would open up for even shittier ska bands, like The Aquabats and Goldfinger.

My best friend, Tim Ekeren, was in the original Fucktards lineup as well, as our accordion player, but he showed up to our first show without a squeezebox. At the time, it sounded fun to have my best friend in my band, but looking back, I’m glad the accordion thing didn’t happen. As far as how our music sounded, we were already the living, aborted-fetus love child of Dee Dee Ramone if he fucked “Weird Al” Yankovic. The overall sound hasn’t changed that much.

The band was formed one night when me, Paul, Joe and Dan were at a show at Kilby Court. They said to me, “Hey, us three are gonna start a band.” I said, “Yeah, why don’t you have me sing and we can call it The Fucktards?” I was totally kidding. They all lived in Provo at the time, and I got a call from Paul the next week, telling me to get my ass down to Joe’s house for our first band practice. Thus, The Fucktards were born.

I went down to Provo because I thought Paul was bluffing. I considered Joe and Dan real musicians, but Paul had no idea how to play bass or even owned one, which turned out not to be a problem because, well, it’s just a bass. I think that Paul knowing nothing about playing the bass made him a natural bass player. He picked it up quickly, and in all fairness, I had no idea how to be a lead singer.

There were definitely some ulterior motives to starting a punk band with my best friends. I was barely 21 and just learning to navigate the turbulent waters of the bar life. Paul was only 19, though, and going to the bar to troll for babes without my best wingman was getting old. So, we figured that if we could get shows at bars, they would have to let Paul in. And by golly, it worked back then.

Another ulterior motive for starting the band was that we heard from Joe and Dan that, when you play a show in a bar, they sometimes give you free beer. As a broke 21-year-old, free beer is right up there with pussy as far as importance in life goes. As far as getting pussy goes, I learned to scratch that off of the checklist right away. When you tell all the girls in the audience that you have AIDS and then sing a song about it, you pretty much kill your chances of pulling any babes. To this day, being the lead singer of The Fucktards has never gotten me laid.

The songwriting process back in those days was a simple formula. We usually came up with the song titles before we would come up with anything else—“I Popped Mother Mary’s Cherry,” for example, was coined by Paul’s friend, Ammon, who came up with it one night while stoned on my couch. Dan is the genius behind the wonderful title, “Up Your Butt and Round the Corner’s Where I’m Gonna Stick My Boner.” I get to take credit for “Fagatron the Robo Slut” and “I Stuck My Dick in a Fan,” and I think Joe came up with “Christ Punchers.”

Our first, actual show was in the basement of a house party at David Berg’s house. He ended up going to jail that night after talking shit to the cops when they showed up for a noise complaint created by yours truly. That paved the way for our first show at Kilby with some crappy punk band called Pezz. From there, we had paid our dues and would frequently wreck the stage at Todd’s Bar and Grill.

The Fucktards still play shows these days, with the same enthusiasm and lack of fucks given that we had in my early 20s. The only original members are me and Dan Rose. Lance Saunders was instrumental in getting the band back when we broke up in 2005. He now plays bass, but we aren’t afraid to play a show without him. Dave McCall is our current drummer and definitely has what it takes to be a Fucktard. He’s been keeping beats for punk bands in this town for years and gets pissed-off real easy.
Looking back, I wonder why more stupid, early-20s drunk kids don’t start punk bands now. Or maybe they do and I’m just too old to notice. Either way, starting a band with your best friends will always rule. To see what I’m talking about, come check us out with The Sunset Sisters on Sept. 15 at Bar Deluxe. When I see The Sunset Sisters play, it’s like looking into a Fucktarded time machine. Oh, there will be half-naked chicks at Bar Deluxe that night, too—we are opening up for a burlesque show.