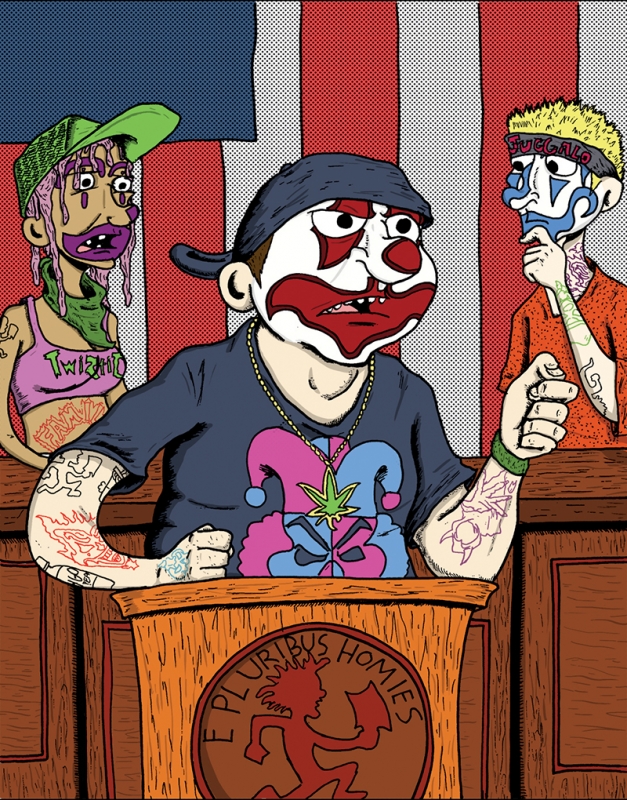 Mike Brown’s State of the Union Address, but for Juggalos

First and foremost, I need to preface this article with the fact that I, Mike Brown, am not a Juggalo. I know a lot of you don’t believe me when I say that, but it’s a fact. I’m more of an ambassador that can speak their ridiculous and not-so-cryptic language. As I’ve stated before, I am their Jane Goodall and they are my chimps.

A lot has happened to ninjas and ninjettes in the Juggalo world since I last wrote some shit about them. I called my buddy Chaos, a longtime Juggalo, to get the lowdown on some of the shit that’s going on. Chaos was the mastermind behind the infamous SLC Juggalo Hotline, which would tell you what bowling alley they would be hanging out at that week, among other local Juggalo events, such as clothing and food drives (seriously) and upcoming shows. Sadly, Chaos’ divorce put a Hatchet Man axe in maintaining the hotline. There’s good news, though: Now that he is done dealing with that JuggaHo, Chaos is planning on bringing the hotline back. It’s the best resurrection since Jesus, if you ask me.

Also, another interesting and well-known story in the assed-out world of the Juggalo is the Federal Government coming down hard on them by listing Juggalos as an actual gang. The Supreme Court actually ruled against this notion, but on a local level, law enforcement is showing no clown love whatsoever (because they have nothing better to do). They’ve accused numerous ninjas of bangin’ just for wearing a Twiztid T-shirt or have pulled dudes over with Hatchet Man tattoos. I don’t know about you, but the notion of Juggalos being a gang is just way funny to me. If I was walking down the street and I saw real Crips on one side and real Juggalos on the other, which fucking side of the street do you think I’d walk down? When it comes down to it, Juggalos are about as scary as a big box of kittens. Law enforcement got this one way wrong.

This whole gang thing has done a lot more to the family other than getting harassed more than usual. Lots of new ninjas who are getting into ICP (only god knows why) are treating it like a gang. Stories of Juggalos robbing other Juggalos are, unfortunately, not that uncommon. The newbs just don’t understand the family concept, and the reactions from the old-school ninjas vary. Some are hanging up their Hatchet Man necklaces and taking their ICP hockey jerseys to the DI and going into hiding. Others are trying to whip the newbs into shape, letting them know that it’s not a fucking gang. Gangs are about making money, or skrilla, if you will. Most Juggalos I know aren’t that good at investments or know what a 401(k) or a mutual fund is.

One interesting thing about being on the FBI watch list is that ICP themselves have offered to pay the legal fees for anyone who has been wrongfully persecuted by the authorities and are willing to file a lawsuit. [Editor’s Note: This may or may not still be in effect.] This is out of their own clown-suit pockets, to boot—like, if you are denied access to your flight (assuming a Juggalo could afford a plane ticket) or something like that, and you want to sue the Federal Government. Say what you want about the whole scene, but that’s actually pretty fucking cool. I’m a fan of anyone who is willing to tell the Feds to go fuck themselves.

Speaking of Blaze and Twiztid, they left the Hatchet Man label. Although, there will still be an upcoming Dark Lotus album. Also, I realize that those last two sentences mean absolutely nothing to you if you are reading this and you have a college degree or a job outside of the fast food industry. It’s important ninja news nonetheless.

Bad news for The Gathering: It was supposed to be held at CryBaby Compound this year in Kaiser, Mo., but apparently, once the town’s non-Juggalos got wind of this, they all signed a petition ousting the festival. I don’t think they even sell Faygo in that town, so hopefully, it’s no big loss. The good news is that the festival has relocated to Legend Valley in Thornville, Ohio from July 23–26. The bad news is that only 6,000 Juggalos can go. I guess that’s what happens when you throw poop at Tila Tequila and try to knock over her trailer, as was the case at a gathering a few years back. For more details, check out this blog that explains the plight of The Gathering in detail: juggalogathering.com/Home

Juggalos also started their own online currency. Taking after the controversial Bitcoin—which was a preferred form of money laundering for many a drug dealer, but is now recognized by many e-commerce sites as legit skrilla—ICP started Juggalocoin. You have to prove you are a real ninja in order to get your hands on this and buy your Faygo online. If you are a Juffalo (fake Juggalo) or a JuggaHo, don’t even bother trying.

Well, that’s about it for now. I really should keep these updates going, but I have to go update my JuggaloBook profile, the Facebook for ICP fans everywhere. If you don’t have your own profile, you really should get one. Killing time there is way more entertaining than any shitty, boring Facebook status update or new photo album of your ex-girlfriend’s cats.