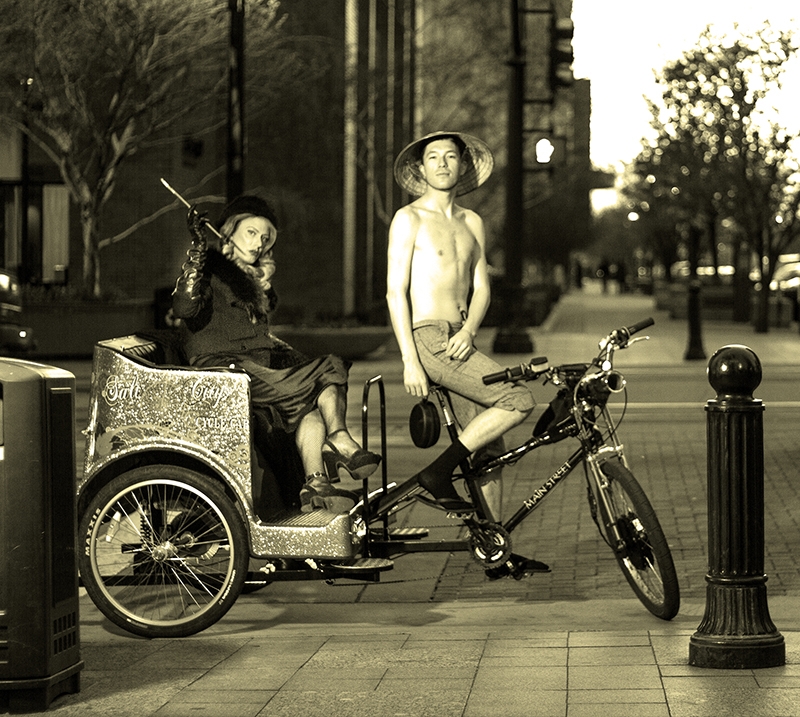 Trajén can be seen working his pedicab around town in his trademark sedge hat, but ’40s starlet Princess Kennedy is a marvel beheld in films yet to be made.
Photo: Jake Vivori

Princess Kennedy: Beauty and the Bike

It’s strange that this is the first time I’ve actually written a bike-specific column for the bike issue, because I’m such an avid cyclist. I don’t drive—I never really have. In fact, I let my driver’s license expire over 15 years ago and never bothered to renew it. I’m the stereotypical city-ite who lives her life within a mile of her house, and if I can’t get there by bus, TRAX or train, then I most likely just don’t go there. If I leave the Downtown area, it’s usually on a plane.
My bike is my baby—it’s an amazing fixed gear that the Kennedolls chipped in and bought me for my birthday this year. If I’m feeling lazy, though, and I don’t want to walk around Downtown or ride my bike, I have been taking advantage of the city’s pedicabs. I’m sure you’ve seen them around, but have you been in one? I like them because, not only are they a great, green way to travel the city, they make me feel like a glamorous 1940s starlet in Bangkok, or a 1920s geisha riding in a rickshaw.
As a columnist, I have this innate need to constantly interview people, and the crews of these pedicab companies are quite colorful characters. My favorite thing to ask these boys and girls is: “One night, someone got in your cab … “ and let them fill in the blank. Most of them tell stories of crazy drunk people usually picked up from The Hotel (which would be my idea of hell). One cabbie told me about picking up three very large guys, whom he later found out were players for the Utah Jazz, and their size threw the weight off and he almost tipped the cab, nearly running into a parked car.
One cutie named Zach uses his cab to play the field and says that he gets phone numbers all the time, which I thought was genius. The first time I ever took a pedicab, some friends and I were at Jackalope Lounge, and it started pouring as we got to the corner of 300 South and State. A lovely young girl was there with her cab, and we decided it would be faster to take the ride in lieu of walking. It was probably one of the more fun rides I have taken—and incidentally the wettest—but, since then, they have acquired canopies for rainy days. Our driver had just recently relocated to SLC from Alaska, and was smart enough to take this job while she looked for a day job, bless her heart—we left her a big tip.
This is really something to remember when you jump in these cabs: This is a second job for these kids, who are often artists and musicians. One cabbie I recently met was a goat farmer at a refugee-geared farm. They are local people who make our city more interesting, and we should really be supporting them when we can. In a way, they remind me of the bike messengers in San Francisco or New York—a little crazy, but a lot of fun.
Here’s some advice that I had to learn the hard way for you the rider, and for the bike cabbies. First and foremost, make sure you ask them to quote you how much it will be to your destination. I got in one at the Salt Palace and took it straight up 100 South to 300 East, and the fucker charged me $15! I was (silently) pissed. I paid him, but I almost named this article “Being Taken For a Ride.” There is no pricing guide, which I feel is the only flaw with the service. It’s left up to the driver’s discretion and, with that, I would urge the drivers to be able to recognize your Downtown dwellers because, if it turns into a service we can’t afford to use, unfortunately, you become the “fucking” pedicabs and not the “cool” pedicabs.
I would actually love to drive one when my knee problem is fixed because I noticed on one of my recent rides with a friend that I was pointing out different points of historical interest, and I think they could charge a bit more for their tours—now that would be cool!
Is it cheaper than taking a regular cab? No, but these days, the cab companies are a joke. I have been so disappointed with them for the past year and a half. If you can even get through to the company, the cabs take a minimum of a half hour to arrive and the drivers are so rude. The pedicabs are not only a great way to get around Downtown, but they’re fast, efficient, earth-friendly and you’re supporting local small businesses and people, helping them grow into what I predict will soon be considered a Downtown SLC staple.
There are a couple of different companies in town, including the SLC Bike Taxi (801.686.8294) and Salt City Cycle Cab (435.252.0513), which you can hail down along Main Street, or call dispatch for pick-up. Happy riding, and everyone be safe out there.