SLUG Mag Soundwaves
Episode #390 – Sofia Scott on Genderfuq
00:00 / 24:10
Spotify Stitcher
RSS Feed
Share
Link
Embed
“Once, when I was on Jerry Springer ...” I love starting sentences like that—it always gets people’s attention, but alas, it’s true. When I was 29, some friends of mine had made up a tawdry story about a fucked-up love triangle and pitched it to the show. It was good enough to get us on a whirlwind trip to Chi-town where it was filmed, and, let me tell you, it was as unglamorous as you would probably imagine. 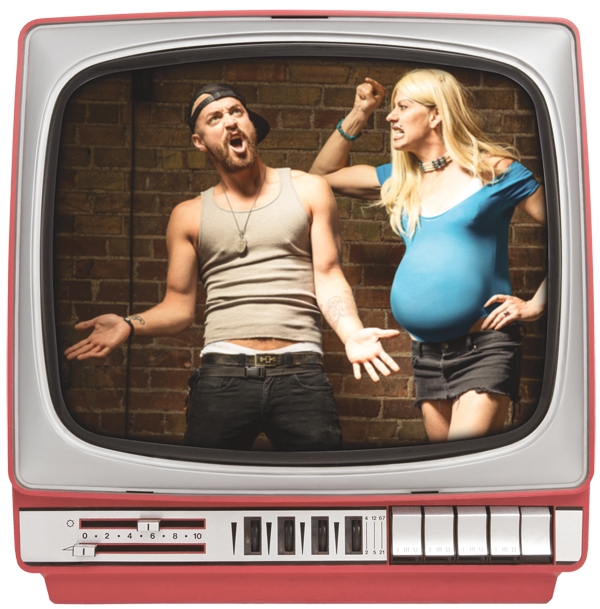 “Once, when I was on Jerry Springer …”

I love starting sentences like that—it always gets people’s attention, but alas, it’s true. When I was 29, some friends of mine had made up a tawdry story about a fucked-up love triangle and pitched it to the show. It was good enough to get us on a whirlwind trip to Chi-town where it was filmed, and, let me tell you, it was as unglamorous as you would probably imagine. The show, titled “He-She Love Confessions,” is an experience that I would love to forget, but have simply had to find the humor in—like laughing off the fact the interns robbed us while we were on stage.

Yeah, it was that sketchy.

The storyline we pitched for the show was that I was involved with two other trannies, cheating on one with the other. Apparently, the story wasn’t spicy enough for the JS Show, ‘cause they called me and asked if I could possibly find a boyfriend that didn’t know I was really a guy­­—hilarious. So I drummed up a boyfriend, a coworker of mine, and to this day, I’m still making it up to him.

I actually get a lot of questions from people about this subject, questions like, “Have you ever been with a guy that didn’t know you weren’t a girl?” Since I don’t date within the Helen Keller community, the answer is “Fuck no! Do you think I’m some sort of idiot with a death wish?”

I have talked about my habits and rituals in columns past, so I think just about everyone knows that I date, but I have never really explained the sub-culture that is my dating pool. No, I don’t date in the gay scene—I’m not into gay boys, nor are fags into chicks with dicks (something to do with the chick part). Readers, I give you the “Tranny Chaser.”

There are about 100 different levels of tranniness, which also rings true with the chaser. There is the guy that is full-on homo, but feels he needs to make a stop at the tranny shack before gay town. There is the unfortunate fly that gets tangled into a web of a party (I have a saying that goes, “The only difference between me and a girl to a guy is a shot of Jäger and a bump of coke” and, believe me, I’ve tested this theory. It’s true). Then there are the normal, everyday guys who have a hankerin’ for a girl who has something extra. I’m constantly amazed at the guys who approach me to go out­­—boys you know. No worries gentlemen, this is not an outing session, so relax.

The one thing that both works for and hinders my dating life is the fact that I’m so well known around town. I’m out and about all the time, so I’m accessible, and I never have to talk about who or what I am to people because, well, you’re reading about it right now. I’ve taken this for granted.

About six months ago, I received a message on Facebook from a really cute guy telling me he thought I was pretty. I didn’t really think much of it, except for being flattered, and that was that. Flash forward to a month ago when I commented on his intense back tattoo and we started chatting, a lot. We got to know each other through 20 Questions Facebook messaging, which turned into an exchange of numbers, and a whole lot of texting ensued.

I really liked this guy. He was really sweet, really good looking, taller than me (not a requirement), had a super great body—cage fighter, yum—funny and not a total dumbass (but enough that I thought it endearing). Finally, the moment came when he asked me out on a date. I don’t actually get asked out on dates much. Guys are too pussy to ask me out for various bullshit, I-would-never-say-yes reasons, so I was all excited. We decided to meet somewhere for dinner, then go from there.

I made sure I looked really cute in my favorite white jean mini (featuring leg), H&M tank and new Converse gladiator sandals. As I stood outside Eva, my stomach was totally in knots as he walked up. My nervous excitement turned to terror as I saw the look on his face as he got closer.

“No fucking way!” I said to him as he awkwardly approached. “Tell me honestly you didn’t know I was a tranny!” Yep, my—and his—worst nightmare was unfolding before us. Two very important fuck-ups: 1. We had never talked on the phone. 2. He had never looked at anything on my FB except for my bikini shots—Photoshopped, duh!

Quite contrary to what you are thinking now, Mr. UFC was very cool and insisted that we keep the date as scheduled, since he was just as much to blame. He was really sweet, which fucking sucks, and I spent the night answering questions about myself, which could have been avoided if he ever picked up an issue of SLUG. I have to say, though: Mr. UFC, if you are reading this, everyone could take a lesson from your openness and understanding, but I’m calling bullshit. Whether you chickened out, or wanted a funny story or whatever the deal was, as far as I could tell, Helen Keller you ain’t!