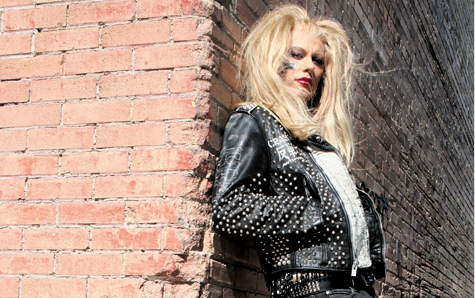 One thing I love about Salt Lake City is the current state of politics. Hot-button topics like liquor laws, equal rights and which club to support all make for good dinner party conversation. What’s great about it is sheer statistics. We have a lot of young people getting involved, and such times change the shape of social behavior.

Back in the ‘90s America was detoxing from the senior Bush administration, dealing with the height of the AIDS crisis and the woes of Desert Storm. In New York City a new mayor came into power and began his master plan to “clean up” the city. Any of this sound familiar? True dat, Manhattan is the most magical place on earth, but for a group of rock and roll freaks this was a little too much. Wanting to stay true to the N.Y. nightlife, they found an old theater in Tribeca and the legendary rock and roll drag bar Squeeze Box was born.  On any given night of the week you could see trannies socializing with socialites, club kids with super models and scrounge musicians with European royalty. It was Studio 54 on steroids and hormones. The incomparable Ms. Guy fronted the house band, Toilet Boys. They hosted the crème de la crème of the rock world like Joey Ramone, Debbie Harry, Steven Trask and the voluptuous horror of Karen Black. They also featured tranny superstars like Jackie Beat, Mistress Formika, Lady Bunny, Jayne County and, of course, yours truly.

The party caught on at the other coast. Los Angeles introduced Club Makeup with an 8-10 member house band that included people like David Navarro, Dave Schultz and Daniel Schulman. Finally, when San Francisco was reeling from the economic downfall due to the .com crash, they followed suit with Three Punk Bands and a Drag Queen. We all had something to say and collectively we were sick of closed-minded bastards and not fitting into the “Gay Agenda.” We needed to drink––a lot––and scream about it.

The major forefathers in this era were a group of overtly political fags looking to fuck shit up and voice their opinion in a way that left straights staring blankly and gays scratching their cloned heads. In 1992 Pansy Division came moshing naked out of the closet and on to the stage. Lead singer John Ginoli (who will be at Sam Weller’s on Friday, May 1) says, “Oppression was at an all time high and a new Democrat about to enter the White House was giving optimism and progress. Hope was the buzzword of the day.” (Sound familiar?) “I felt it was time for a group of punk-as-fuck, rock-and-roll-loving homos to get out there and shove cultural activism down peoples throats,” Ginoli says. Thus Pansy Division spawned the Queer Core movement. It sparked a career of unique proportions they could never have expected, including a tour with Green Day and extended coverage on Howard Stern, who coined the band as the gayest thing he’d ever seen. “Living in the bubble of San Francisco, we feared being accepted by the general public of ‘Middle America.’ It only took a few shows to see that the USA was ready for change,” Ginoli says. “It was easy to feel outcast among outcasts in both communities.

In fact, after a show in Salt Lake City, a (queer) man rushed the stage after the performance wildly claiming that singing so bluntly about gay sex will “set back our progress.” Bullshit! Now is the time and this is the way!

My point is this: In times of political strife and repressed economies the parties get GOOD! We come together for a common cause and drink our way through it with a collective “Fuck you.” New York gay rapper Cazwell, who just visited Salt Lake for an amazing show at Bliss’ Babylon, told me he felt very welcomed by an extremely appreciative crowd. “It’s obvious they’re hungry for change and diversity,” Cazwell said.

Gay has become the new black. Every straight bar is getting on the fairy wagon. Any night of the week you can enter such watering holes for a newly appointed “gay night.” They don’t want to be associated with the extreme right wing and at the same time are realizing our disposable incomes and affinity for booze. The problem is it’s the same night with the same DJs and crowds, which is fun for about three nights. Let’s face it, being a top-five-circuit DJ is like winning the bronze metal in the Special Olympics, only not as interesting and it leaves you twice as tired. Luckily something new and different for gay, straight, freak, and normal (whatever that is) is on its way. TranSister at the Urban Lounge is coming Thursday, May 14 and every second Thursday thereafter. DJ Rainbow Tay, the mastermind of this cluster fuck of angst, was sick of yearning for something new and different and decided to be proactive about it. TranSister is billed as a live music-oriented str-ay club featuring a tranny-fronted punk house band (Vicious Beauty) and local and national acts/DJs. Sets through the night will be fun, hard, and unexpected, and you’ll never have to hear ancient Alanis Morrisette remixes or Lady Ga-Ga. I have a feeling people of all walks of life will be beating a path to get in every second Thursday of the month.

So much is changing in Salt Lake. I think party promoters are discovering there are enough of us to go around, competition is good and people want options––it’s human nature. I can’t wait to see where this political train-wreck stations a year from now. It promises to be one hell of a ride.

I want to personally invite all you faithful SLUG readers down to Sam Weller’s Bookstore on Friday, May 1 to hang out with me and meet my friend John Ginoli of Pansy Division. He’ll be reading excerpts from his new book, Deflowered: My Life in Pansy Division, showing clips from the newly released documentary, Pansy Division: Life In A Gay Rock Band, and tickling us with a musical selection or two. –Princess Kennedy