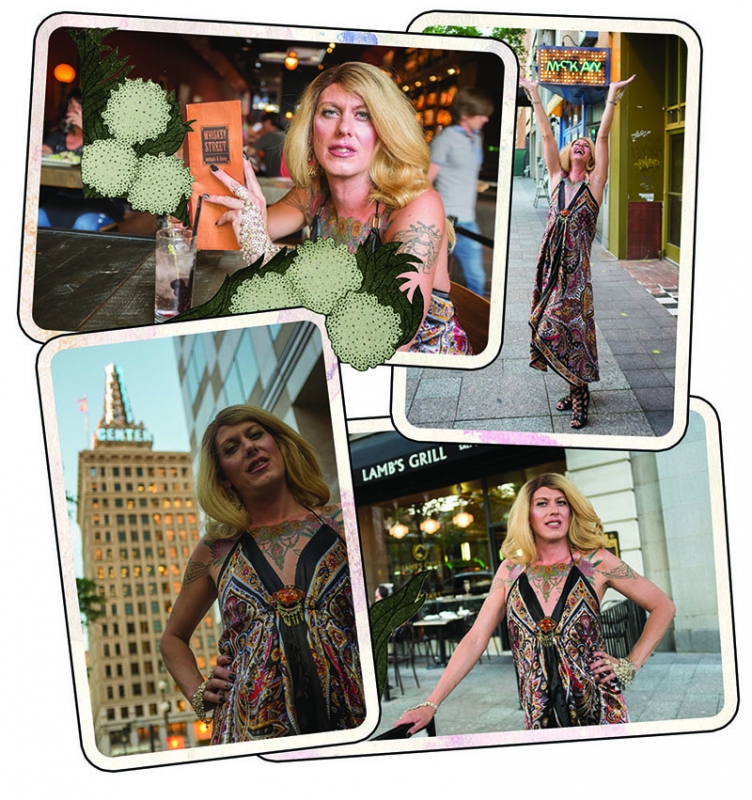 I recently got a documentary from the library titled Salt Lake City in the 1950s. The best part of the doc was the segment on Main Street. I remember hearing stories from my parents and grandparents about the grandeur that was our modest Downtown. “Back then,” my grandma would say, “you didn’t even think about going shopping without completely dressing up in your Sundee best”—a tradition I half wish we still practiced.
On the tour of yesterday’s Main Street, it’s hardly recognizable compared to today’s. True, the architecture exhibited the still-present Victorian-style grace, and it seemed that, on every block, there was a recurring combination of high-end department stores. One such store, Auerbach’s—which I found while doing some research for another article—had a fabulous tea room where the gays of the ’30s, ’40s and ’50s would hang out and “cruise” each other. Of course, there was the legendary ZCMI, America’s first department store; a myriad of the most amazing theaters all just dripping in Greek revival that had become so popular in the deco period; dance halls, like the Rainbow Terrace; restaurants; five and dimes; and even a billboard-sized baseball diamond that kept a real-time score of the World Series. By the time any of us (or the historical society) were born, it was all used up and torn down.
I don’t really remember that much about Main Street as a small child, which is weird because my mother had a dress shop in ZCMI Mall. One thing I do remember was that every Friday, my mother and I would have lunch at Lamb’s Grill (Downtown Main Street’s oldest resident and possibly SLC’s oldest restaurant). Stepping into Lamb’s Grill is so surreal to me. They have barely made a change to it (including the menu) since they opened in 1919, but other than that, Main Street sat as a barren wasteland for decades.
As a teenager, no one went to Main Street—none except for the dregs of human society, which meant that my friends and I had to hang out there. On any given day, you would find us out front of either ZCMI or Crossroads Mall—it all depended on which one would ask us to leave, and we’d go across the street to the other. Then a few days would pass, and store owners would complain about the punk trash outside, and the cycle would continue … until one day, when a businessman called us scumbags, and my friend Animal, a giant skinhead (a traditional skinhead, not the neo-Nazi kind),dragged him by his tie to the street and curb checked him. That was the end of us loitering in front of the mall.Down the street was the Catholic gift center, and I earned my points in hell by shoplifting the fuck out of their crucifix section almost weekly. I had a great collection, though. Across from Sam Weller’s was a mag shop that let us underagers buy porn and cigarettes. It was also the only place you could get Interview Magazine, and every month, we went straight there to see what Andy Warhol had done on the cover. Next to that—where Bodega is now—was one of SLC’s first underage (and mostly gay) dance clubs, London Underground. I’ve tried to figure out exactly where it was because it had an entrance that was in a super steep staircase that went down to the same level as The Rest with a huge mock marquee resembling UK’s tube signage. I’d sneak out of my house Thursday through Sunday from age 15–17 where it served as an escape for hundreds of Salt Lake City’s misfits.Lastly, on my trip down memory Main was 300 South and Main, right on the corner. It was the late-night hangout for the gays and their friends. We would hang out (during warmer months) and take over Memory Grove all day until they closed down, then we would pile in cars and head to and park at 300 South and Main, and the dance party would begin. We would all turn the radios in our cars to KCGL, the übercool new wave radio station of the ’80s, and we’d vogue out to the likes of The Cure, Siouxie or Madonna. It was a magical time—I hadn’t even realized that I had a love affair with the street that is Main.I’m super impressed at the buildup of new Main Street—I don’t just mean ours, either. It seems to me that there was a point in almost every city that Main Street and the momand-pops were on the outs, becoming extinct. I’m obsessed with the way it seems, scholastically, that we have groomed a generation of urban planners to bring back a small-town feel to the big cities, reviving and gentrifying Main Street, USA, back into places that don’t just generate hoodlums and crime. I find urban planning to be fascinating, and if I went back to do school (again), I’d probably study that.My love affair continues with our thriving Main. When we’re hungry, we walk down to Main and end up at Eva, Whiskey Street or The Atlantic. Weekly, I find myself having drinks at Cheers to You or Murphy’s. The time has come for you to discover what memories you’re going to share with the next generation when you tell them what delights you loved back in your day on Main.