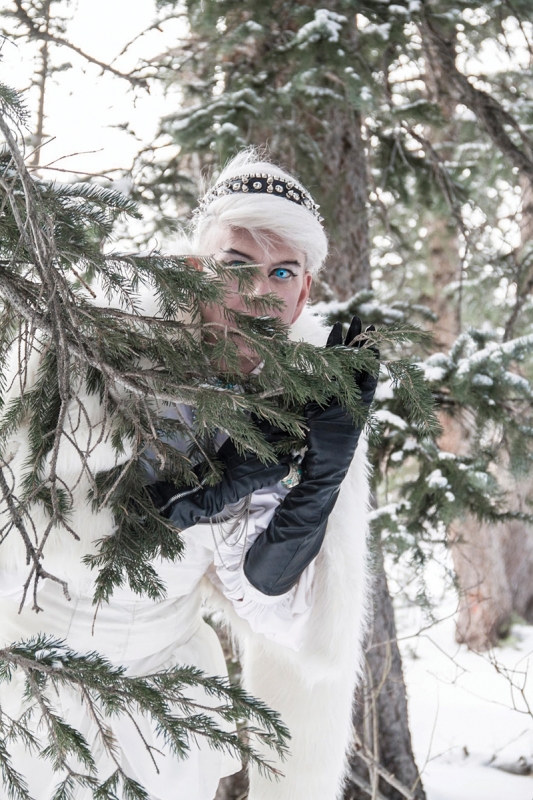 Princess Kennedy will be the most sparkling snowflake at the Snow Ball, no doubt.
Photo: Panzer Photography

Happy Holidays er’body! Let’s talk about Salt Lake Royalty, and I don’t mean me (although we will talk about me). I don’t mean Brad Wheeler, Sara de Azevado or Max Payne and his Groovies—I’m talking real-life royalty—kings and queens, emperors and princesses. Royalty with real-life crowns, scepters, pomp and circumstance: the Royal Court of the Golden Spike Empire, or the RCGSE, a group of very dedicated philanthropists.

Approximately 38 years ago in 1976, the big gay bar in town was called The Sun. It was one of the first discotheques west of the Mississippi to feature DJs and a Saturday Night Fever–style dance floor with lighted squares, located where the Energy Solutions Arena is now. It was the club that every gay and gay-friendly star stopped in to see the crazy Mormon gay scene. This wasn’t the only option for our gay forequeens n’ daddies, but it was the place that everyone in our small and slightly diverse community felt welcome and where, on any given Saturday night, you could come and see the prettiest transvestites (not PC anymore, btw) in all the US of A—a title that has followed our city’s beauty (drag) queens for years.

These gurls decided to jump on a bandwagon that had started a few years before with an organization called the Imperial Court System, birthed in San Francisco (duh), consisting of the most glamorous of the glam queens. They saw in the early ’70s that (I’ll catch hell for this) our community was a mess, and sometimes we couldn’t keep it together. Not that this was our fault, really—we had problems like any other community, but when it came down to getting help, as a fringe society, we found it difficult for anyone to care. These Lords and Ladies realized people would flock to come see men in makeup, so they might as well charge and pay it forward. To date, almost every state in the union has a “Court,” and most have them in multiple cities.

The good they do is undeniable, with funds that go to AIDS, cancer research, and individuals in need. In theory, they are a wonderful association, but it hasn’t always been for the good of the people. At one point in time in the Court’s history, the good seemed to have been lost and it was ruled by a bunch of catty, mean, competitive, backstabbing cunts that no one really wanted to be around.

More years ago than I am willing to admit, Princess Kennedy (known to her counterparts as the red-headed witch named Ginger back then) was involved with the RCGSE. I held a title, Miss Gay Pride. It lasted for all of three months until I decided that I hated all of them and renounced my crown (cue scandal). I thought this was my only in to the female illusion world, and I vowed I would never put on a dress again or hang with that crowd, but you know how the saying goes—a few bad apples …

Thank god for the new generation—it seems that with new blood comes new life, and the queens of today are taking themselves a little less seriously, but keeping the community and causes as serious as ever, like my dear friend Nikki Steele. Steele is currently the Court’s Princess Royale, a title that is bestowed, not competed for, and she quite possibly is the Queen that people are talking about when it comes to the aforementioned beautiful Utah Queen folklore.

Her one duty as part of her title is to host and throw a big party for the RCGSE holiday season—a Snow Ball. This gala is the largest fundraising benefit on the RCGSE calendar, and goes to their People With AIDS Fund, which is quite the spectacular spectacular. In the past, it’s raised thousands of dollars, and not for some nameless, faceless research: They get a list of men, women and children in need, and they take the cash and give them a Christmas with presents, food, rent—whatever they may need. The good that comes from this show is insurmountable, and Princess Nikki, the Court and I challenge you to take a step off the usual snow-covered charity trail and come ice dance on the wild side to make this the best Snow Ball ever. If you’re human and not an asshole, then you give to a holiday charity, right? No reason you can’t come and give to this one and get a night you will never forget. After all, drag queens are the new black.

The party is officially called Sparkling Snowflake Soirée (try to say that without lisping, boys). It will start at 5 p.m. on Sunday, Dec. 15 at Club Mixx with a formal cocktail mixer, followed by a dinner that will remind you of the most delicious ward potlucks—the best part of any Salt Lake function—and a show that Nikki Steele promises will be as outrageous and bombastic as she can pull, from a new generation of exciting and artistic young drag dollies, giving us faith, once again, that drag queens are not only talented, but also nice people. Check them out at rcgse.org.

All that for a meager $15-20 admission fee is a pretty amazing way to give back this holiday season and make sure that everyone has a Fierce Fucking Christmas—and P.S. Happy New Year, bitches.