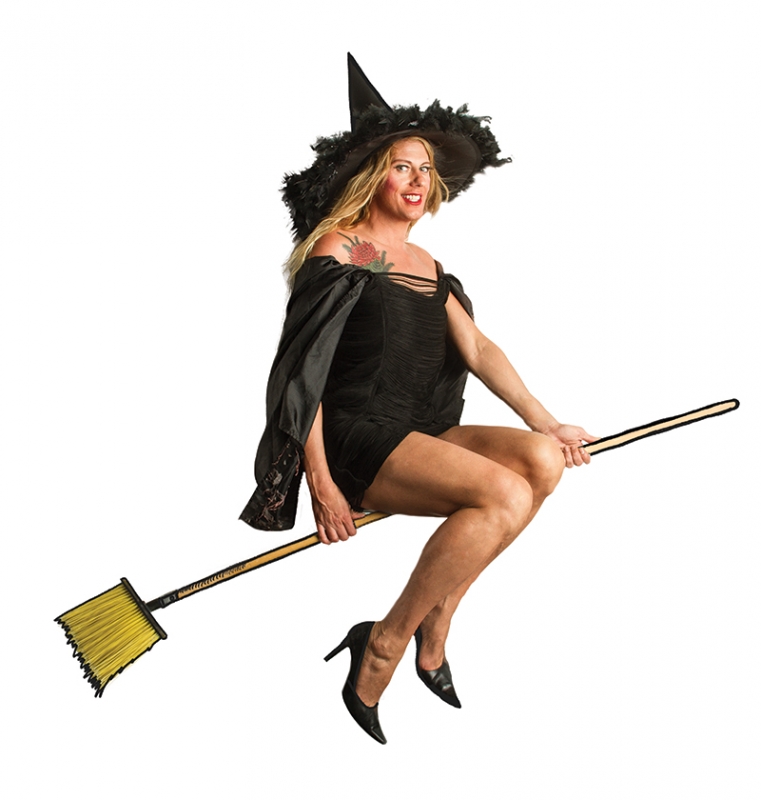 Join Kennedy, the most evil witch of them all, at the Witches Ball this October.
Photo: Jake Vivori

Who in their lifetime hasn’t wished they had magical powers? To be able to fly or ace school without ever doing anything, to obtain independent wealth, or maybe to find the perfect romance? Whatever your fantasy was, I wished to be a witch.

When I was a child, my mom pulled out all the stops on All Hallows’ Eve with her own perfectly spooktacular witch costume––I’m talking badass witch. She had the prosthetic nose, arborescent fingers, green face, flowing black ensemble, hat, broom––all of it.

As I grew into a teenager and started finding my goth side, my friends and I would go to Memory Grove to the Witches Cabin where the Spirit Tree is located and build altars of flowers and fruit, burn incense, light candles, and, on occasion, when we felt really brave, we’d break out the Ouija board. For you mere mortals not in the know, the Witches Cabin is a broken-down cabin about a five-minute walk up the wooded path of Memory Grove. Within the circumference of the structure is a lone tree that is said to be linked to the natives who once inhabited our city.

I was never able to find out who the cabin originally belonged to, and it seems unlikely that when they built this cabin, they left a sacred tree standing in the middle of it. However, every city has to have an urban legend about a house, hill or gravesite to give teenagers something to do, and that is just what our Witches Cabin is. Its paranormal beginnings started in the ’60s with the hippies, and has provided a playground for countless adolescents to get their acid trip on since then.

It is said that you can go to the cabin at sunset to take photographs, and orbs appear in the photos. Another legend is that a bride who was supposed to get married at the reception center in the park met an early demise and will appear in the twilight photos. I think that they have only been doing weddings there since the ’60s, so it is my guess that she is roaming the earth, pissed about her hideous 1970s wedding dress.

Utah has a real connection to the occult––unmistakable links that, no matter who you are, directly tie us to the wonderful, wacky world of witchery, especially those who were raised Mormon. Our dear founder, Joseph Smith, was a seer, revelator and scryer. At the time, it was perfectly acceptable to wield a couple stones around and translate ancient documents, and the kinda creepy part is how he and others could be right. Back in the day, all around that region of New York, these seers were hired to seek out treasure buried all over by ancient peoples, and somehow a chosen few, including Smith, were really good at finding it. Our other unmistakable link, one that can impress the most jaded, is the one and only Stevie Nicks, who lived here during her teen years, spinning her magic shawls through Salt Lake.

I went on a witch-hunt to see what our modern-day coven options are in the Salty City, and, as it turns out, we have our very own one-stop pagan shop called Crone’s Hollow. Located at 2470 S. Main St., they have everything one would need, from storefront goodies, a library, rentable meeting spaces to a myriad of weekly meet-up groups popping in, consisting of psychic readings, social gatherings and magic studies. Check them out online at meetup.com/salt-lake-witches.

I wanted to find some Halloween witch fun, so I looked to my friend, Trisha McBride. McBride is a yoga teacher, master belly dancer and altogether pagan goddess who puts the chic in psychic. This HWIC (Head Witch In Charge) was involved with the larger pagan communities of the East Coast, but since moving to our state, fancies herself as more of a solitary practitioner, weaving her spells through the magic of dance.

Three years ago, she saw the need to start a Witches Ball, something that would be more of a raw party than some of the black hat societies—and a lot more adult than the Halloween witch events thrown at Thanksgiving Point. McBride took one part witchery and one part headbanger and came up with the annual Witches Ball, held for its third year at The Garage on Sat., Oct. 26, doors at 8 p.m.

What does a Witches Ball consist of, you ask? “Aside from a little cheese with your vampire wine––a modern take on a very old tradition––dancing to old-school goth tunes is one of my favorite parts of the night,” says McBride. “I ask all the DJs to pull out their most wicked tracks to create something that feels like the early ’90s goth clubs I used to frequent, and some live music to get you in the mood.” This year, L.A. band Spindrift will be headlining, with openers Femme Medea, DJ Selina Kyle and DJ Red Siren. And as always, with McBride comes Salt Lake’s finest belly dancers. “Prepare to walk through woven light spells set in the room—it’s that kind of a night,” she assures me.

The night’s crescendo is the crowning of the baddest witch of the night, who receives a crown and a cauldron filled with some serious cash and bling value. “I’m a sucker for a pretty face and a wicked costume. It’s a toss up––anyone can win,” confesses McBride. Pick up tickets for $10 through 24tix.com, or get them for $15 at the door.

Well, goulfriends, this is where I shall be celebrating my Wiccan Christmas this year, so tune up your broom, polish those pointy boots and rat that hair. I’ll see you there, witches!