00:00 / 16:39
Spotify Stitcher
RSS Feed
Share
Link
Embed
The rash of fag bashing that we experienced this fall scares the shit outta me because I walk in the same areas all the time, alone. After these incidents, there was a sort of community panic about how to be safe, stay safe and send a message. This became an outcry for vigilantism. Not pepper spray, tasers, karate or common sense—it went straight to “I’m getting a gun.”

Princess Kennedy: Tranny Get Your Gun 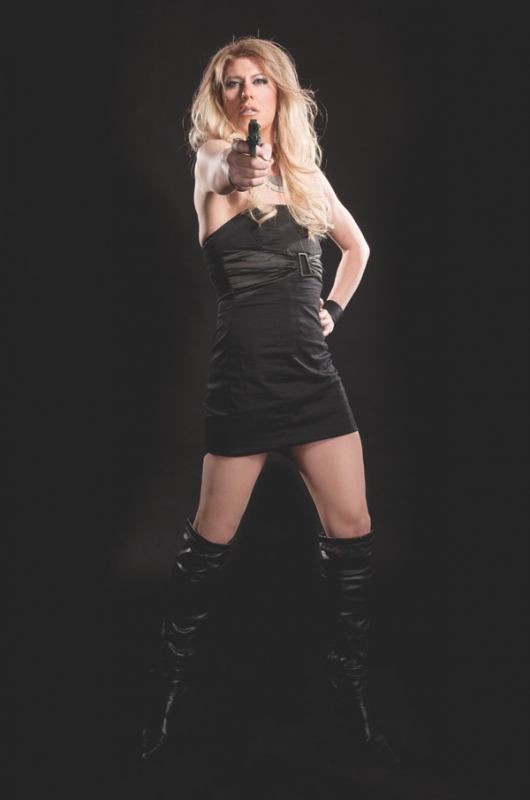 Princess Kennedy believes it’s a constitutional right to own a weapon, but she’ll stick to keeping herself out of dangerous situations rather than risk going to prison over firearm misuse. Photo: Chad Kirkland

For those of you who read my column every month, you’ve learned the special set of challenges unique to those who trans-identify like myself. I’ve gone through social, political, familial and even sexual, situations fine, but sometimes it’s the everyday situations that can be the roughest. The looks of disgust, the tone of disapproval and the threats that come from under the breath that make the hair on the back of your neck stand up, because you know it’s not idle.

On the whole, I feel overwhelming support from Salt Lake. I know most of you have my back, but, alas, I know there are people who would rather see me on my back in a shallow grave, and for me to think otherwise would be careless.

The rash of fag bashing that we experienced this fall scares the shit outta me because I walk in the same areas all the time, alone. One night last Feb., I walked from The Complex to Metro, drunk as fuck in my bra, panties, stilettoes and a fur coat. So stupid! I know better than that and I am a huge believer that the best way to stay out of trouble is to not be a fucking idiot. Luckily, it was a blizzard out, because in an alternate universe I was getting raped, beaten, cut, curbed and dragged behind a four-wheeler before being hanged, drawn, quartered and shot.

After these incidents, there was a sort of community panic about how to be safe, stay safe and send a message. This became an outcry for vigilantism. Not pepper spray, tasers, karate or common sense—it went straight to “I’m getting a gun.” Myself included.

I thought I’d get a little pearl-handled revolver for my clutch and whip it out if I found myself in a compromised situation, like some hot Bond Girl delivering a “Sorry to disappoint you…” witty line.

I came across a post for the Concealed Firearms Permit class, being offered at the Pride Center. I immediately signed up to take the four-hour class so I could get my strap on!

The class is offered by Scott Mogilefsky, who (according to utahccwtraining.com) “… is a Veteran of the U.S. Army, served overseas and was deployed to hostile environments.  He is an avid hunter (rifle and bow), outdoorsman, mountaineer, survivalist and marksman.” His 20 years of experience, and his compassion for what the LGBTQ community has gone through, inspired this family man from Syracuse, Utah to call the Pride Center and offer his training as a Concealed Firearm Instructor through the Utah Bureau of Criminal Identification.

I immediately felt comfortable with Mogilefsky. I could tell he wasn’t one of these gun happy, crazy militia types. I wasn’t surprised to hear that no one showed up to the first class and he had been met with criticism from certain members of the LGBTQ community who felt suspicious that he was exploiting the gay community’s misfortune for monetary gain.

I am here to tell you that nothing could be further from the truth. In fact, the class Mogilefsky teaches is set by strict guidelines from the BCI and comes from a place of concern and empowerment. The class is so intense that it’s obvious no one really wants you to have a gun. There are so many rules to follow and so much info in the class that the reading material is a good two inches thick. The circumstances in which you actually shoot someone and have it count as self-defense are very few. Here is a huge myth: If someone breaks into your house, unless you are being mortally threatened or raped, you will go to prison if you shoot. If you decide to carry your gun unloaded and pulled it on someone you felt was going to attack you, you’ll go to prison for “brandishing a weapon.” If you were around when Dane Hall was being attacked, the only point at which you could have taken a gun out to help him was JUST prior to the part where he got curbed, because that is when his life became threatened. The point when you can actually shoot a person is so limited, it’s about a three second window to decide, so you better be calm, in control and highly trained, or you will go to prison. If you thought that being called fag outside the club was bad, I’m sure that it’s nothing to being dry fucked in your cell by Curtis Allgier.

I firmly believe that it is your constitutional right to have a weapon. For those of you who don’t, you should take Mogilefsky’s class. You will actually learn a lot about what you think you know. It’s not the people taking the class or the well-informed instructors that are out fucking shit up—it’s the dumbasses who don’t care that shoot people.

I think I’m good on getting the gun—I don’t want the responsibility of making a life-altering mistake. Like shooting a baby, a friend or myself in some post-hangover depression.

I’ll stick to the fantasy of being a trained assassin and promise to try and keep myself out of stupid and dangerous situations.