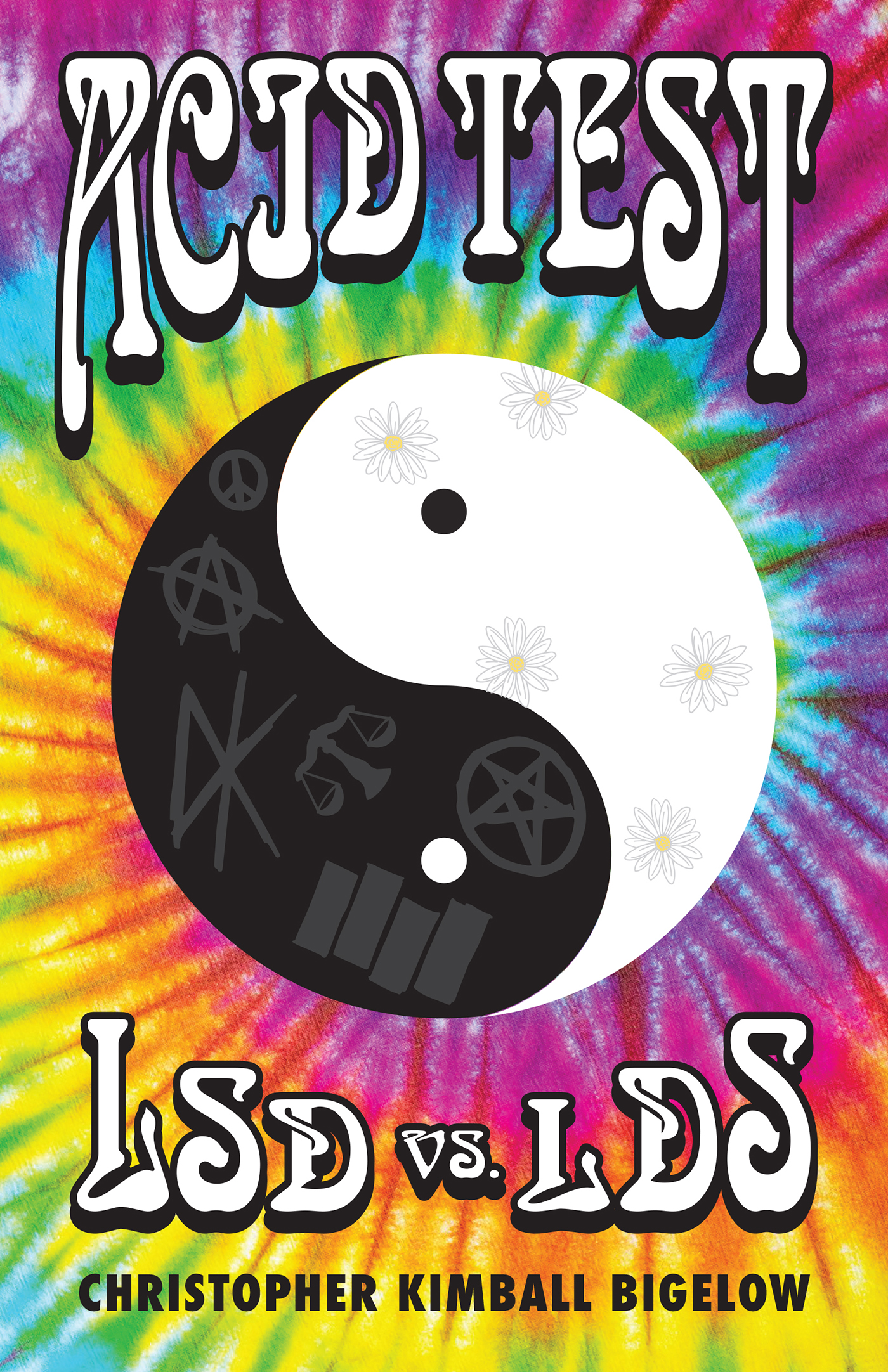 As per my obsession with Tom Wolfe’s American classic The Electric Kool-Aid Acid Test, I was instantly drawn to Christopher Kimball Bigelow’s memoir. Similar to Wolfe’s first-hand portrait of psychedelic drug culture and the true “acid tests” initiated by Ken Kesey in the late 1960s, Acid Test is an in-depth chronicling of Bigelow’s own drug experiments and rejection of mainstream culture during his coming-of-age in 1980s Utah.

If you find yourself intrigued by the darker corners of Salt Lake City history and the outlandish early doctrines of The Church of Jesus Christ of Latter-Day Saints, you’ll enjoy this memoir. If you find genuine quotes about the “Satanic Panic” of the 1980s entertaining (claims that AC/DC stands for “Anti-Christ Devil’s Children,” speculation that John Lennon was a sorcerer obsessed with acquiring the ancient spear used to stab Jesus, etc.), you’ll enjoy this memoir. If you find yourself irritated by the saturation of bland religious culture, have questions about experimenting with drugs or find yourself going through a faith transition, I believe Bigelow may have written this book just for you.

“Bigelow channels a younger voice in his writing, narrating his 17-year-old memories with a cliche naïveté.”

As the oldest of nine children in a Mormon family and the great-great-great-grandson of LDS apostle Heber C. Kimball (with the mind-boggling family stories to prove it), Bigelow longs to leave behind the plain, white-daisy culture of Mormonism and partake in the edgier punk lifestyle sweeping the state. “Chaotic neutral,” a term he borrows from Dungeons and Dragons, is his ultimate lifestyle goal, while Mormonism is simply “a boring tradition for uptight, uncreative people.” As his adolescent adventures unfold, Bigelow begins to dabble in some fundamentally chaotic-neutral behavior, including minor crimes, incessant drug use and the occult. Things take a turn for the worse when, on a bad trip, Bigelow hallucinates that his friends are morphing into animals and receives a malicious revelation that humans are essentially just another animal the universe doesn’t give a shit about. Between the lessons he gleans from Stephen King’s The Stand and increasingly frequent close encounters with the demonic kind, Bigelow is ultimately forced to confront the possibility of good vs. evil as a cardinal truth.

A web URL is printed inside the front cover of the book that leads to a YouTube playlist queued with every song mentioned in the book in proper order. This is a thoughtful addition to the memoir, and it brings to life the crux of Bigelow’s story; Music is a facet inseparable from one’s coming-of-age years. He often describes music as sacred to his friends, and while reading over his memories attached to the songs of Depeche Mode, Sex Pistols and Rush, my own post–high school memories of freedom and exploration flooded back to me, each tinged with my own favorite tracks from the time.

“As his adolescent adventures unfold, Bigelow begins to dabble in some fundamentally chaotic-neutral behavior, including minor crimes, incessant drug use and the occult.”

Bigelow channels a younger voice in his writing, narrating his 17-year-old memories with a cliche naïveté. This isn’t to say his writing is underdeveloped, however, as he writes with all the components necessary for a great memoir: engaging dialogue, interesting and relatable prose and an explicit attention to detail. He even remembers smelling a whiff of lemongrass during his first kiss. Bigelow captures the innocent desperation he felt to be a “new-waver” so vehemently that as I read, it made me want to be one too.

Acid Test also chronicles grim events from SLC’s history that I had somehow never previously heard of, including Mark Hoffman’s salamander letter and the bombings that followed in 1985, as well as the tragic suicides of cult leader Bruce Longo and his family. While the publication of yet another book about Mormonism’s dodgy history and the story of a disenfranchised youth trying to leave the church might seem overdone, un-relatable or fraught to some, I thoroughly enjoyed peeking inside a not-too-distant culture I never had the opportunity to take part in, all set against the backdrop of my hometown. While reading, I imagined myself at Bigelow et al.’s favorite hangouts that have since closed, such as the Cosmic Aeroplane bookstore and the Palladium Dance Club.

“Bigelow captures the innocent desperation he felt to be a “new-waver” so vehemently that as I read, it made me want to be one too.”

As the story continues, Bigelow’s actions and desires grow less innocent and danger looms imminent. He writes about the eventual tragic deaths of many of his punk friends and acquaintances as if he’s the lone survivor of the era. Shaken by the consequences of his actions, Bigelow begins to understand the gravity of the “dark side.” But by the time the memoir wraps up, Bigelow has somehow expressed equal fondness for the “good” and “evil” moments of his life. I admire this, as it’s a truly chaotic-neutral thing to look back upon the contradicting decisions one has made in life without judging them, and maybe even allow oneself to revel in them both.

The most miraculous thing about this memoir is that, although at times (subjectively) morally explicit, a truly broad scope of people could enjoy it. Anyone affiliated with Salt Lake City could relate, as could anyone who feels oppressed by Mormon culture or any other popular culture. Anyone interested in psychoactive drugs or learning more about Mormonism could find it interesting. Anyone who grew up in the church and has since left, or even a self-identified active Latter-Day Saint with a good sense of humor and healthy human curiosity, could be entertained by it. Acid Test is an honest, personal account of how both religion and drugs can influence a person, and even hints at how they may work together. Bigelow offers this far-out insight at the end of the book; “Sometimes I felt anxious and queasy, but I didn’t regret the experiments, because how else could I have learned? … Maybe I’d needed LSD to prep my imagination for LDS, like Joseph Smith had needed folk magic to prepare him for prophethood.”

“If you … have questions about experimenting with drugs or find yourself going through a faith transition, I believe Bigelow may have written this book just for you.”

It gives me the warm fuzzies to know that, after Bigelow’s journey of shunning religion and then accepting it, he did indeed live out his hope that he would do something “creatively independent within Mormon culture.” While he did go on to serve an LDS mission and write for the church-owned magazine Ensign, Bigelow also founded and wrote for a handful of Mormon satire publications (The Sugar Beet among them), carving out his own radical niche in the conservative culture. A list inside the front cover indicates that Acid Test is the first book of a forthcoming trilogy, anticipated to be followed by Mission Test and Zion Test.

Bigelow’s insightful, thematic storytelling and thought-provoking prose allows Acid Test to transcend the simplicity of being just another coming-of-age tale about counterculture. Advocating for the belief that a life is ultimately one’s own, this is a memoir for the hippies, punks and hipsters; a nod to the limit-pushers of every generation. –Mekenna Malan