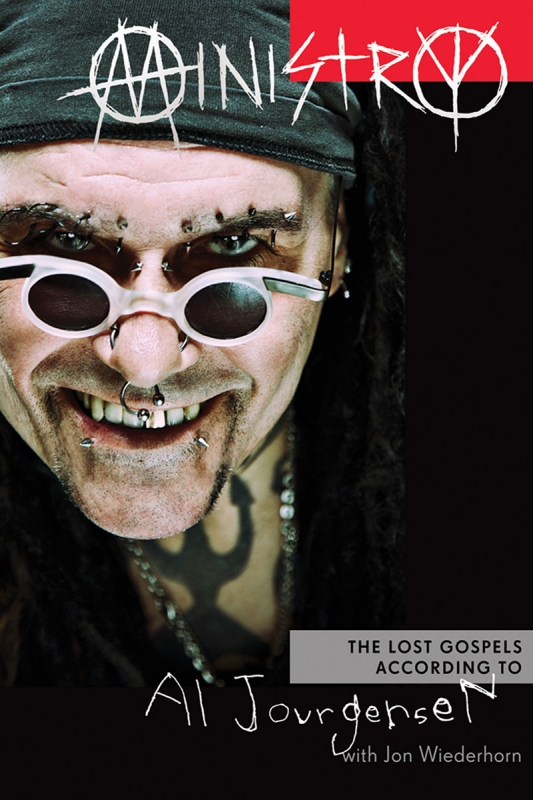 From the opening praises of fellow rockers and a recounting of the third time he flat lined, to the death of Ministry along with guitarist Mike Scaccia, industrial metalhead Uncle Al’s rock n roll memoir is a non-stop double-bass to the brain. For a man who reinvented every debauched rock cliché and took it to 11, Jougensen comes across as surprisingly down-to-earth, if such a thing can be said of a carrier of a two decade-plus addiction to every drug imaginable, and most of the diseases that go along with that. Inside these pages, you’ll learn the answers to such imponderables as: Why does Jourgensen always looks so bored on stage while the band tears it up? How did a bet with his daughter end up getting Jourgensen 16 piercings in his face in one sitting? How did Jourgensen’s “ethical” IV drug use cost him a toe? And what, exactly, Gibby Haynes was going on about during Jesus Built My Hotrod. Actually, that last one isn’t answered, because no one—including Haynes—seems to know what he was drunkenly talking about. But look, man, it’s about the journey, not the destination. Hilarious, filthy and eye-opening, just like a Ministry album—except without the massive head trauma. –Madelyn Boudreaux

I’m not a metal head by any measure. I love Black Sabbath, Slayer—hell I’ll even bump some Electric Wizard if the mood strikes me. I decided to pick up this massive book to get in touch with my inner metalhead. I wasn’t disappointed. Did you know that doom metal was invented as the result of physical limitations? Or that there were two versions of Judas Priest before they honed their sound? Neither did I! Instead of reading this behemoth (736 pages) cover to cover, I skipped around and eventually got to every chapter. My favorite parts of this book were all the quotes and stories from Lemmy. The man is the Mark Twain of metal. Conversely, Danzig comes off sounding like a tool most of the time. The book covers industrial, hardcore, metalcore, thrash and the regrettable nu-metal in great lengths. There were chapters where I simply couldn’t put the book down. Learn more random facts, tales of debauchery and drugs when you pick this mother up. –Alex Cragun If you’ve ever been curious about The Runaways’ actual story, this book is probably the closest you’re ever going to get. It’s known that many of the band members actively hate each other to this day, therefore getting a complete and accurate picture of their brief existence is near impossible—not to mention one of the founding members is dead, making McDonnell’s task even more daunting. Scraping together accounts from all members, and even interviewing flamboyant, morally questionable manager/lunatic Kim Fowley, the way McDonnell weaves the narratives together allows the reader to decipher and judge as to what really happened to the group, from their conception to their height of fame and influence, to their destruction. McDonnell doesn’t skimp on the juicy details, including plenty of drugs, underage sex, child abuse and rock n roll. The book takes a very distinct feminist slant—not really surprising, but too much at times. McDonnell also insists on making constant comparisons to the movie The Runaways, and has extremely random and irrelevant interjections (no one gives a shit if you think Miley Cyrus should cover a Runaways song). However, if you want to read some messed-up stuff about arguably the first female rock band, this book is made for you. –Allison Shephard

Although Jimi Hendrix’s letters home and to record labels, notes on cigarette cartons, napkins and other memorabilia were compiled together by Peter Neal and Alan Douglas, this book is an autobiography written by one of the greatest guitar legends of our time. It not only shows Hendrix had heart, it also shows how he cared for those around him, the people struggling on the streets and the state of the world. It tells a tale of how a very poor boy’s love for music and a backwards-strung guitar take him on a journey from fighting to get a “gig” at a dive bar to the pleasures and hardships of fame. Reading the story of how Hendrix played with many famous musicians of his time, like Little Richard and Buddy Miles, taught me the determination of the guitar great and how he did not want to play other artists’ sounds, but how he had a sound of his own and strived to get the chance for the world to not only hear but experience it. –Mistress Nancy

We Are Wormwood
Autumn Christian
Self Published
Street: 07.29

Christian has one of the most interesting and haunting voices I’ve ever had the pleasure to read. Her peyote-trip imagery and unapologetic confrontations with all manner of unseemly human behavior return in this dark portrait of a girl whose schizophrenic mother has foretold for her a great and terrible destiny. We follow narrator Lily as she attempts to navigate the minefields of adolescence with the burden of genetic insanity ticking in her veins. Joining her quest are a motley crew of friends and foes: a best friend who raises carnivorous plants, a witch, a saint, a blood-painting artist and a demon girl for a love interest. Hunting them all is a great pagan goddess strong enough to swallow the stars. For some undefined reason, I found the “antagonist” of her last novel, The Crooked God Machine’s black-horned god, more deftly written as a villain than the Nightcatcher is here, but the latter wasn’t without her terror and awe. Perhaps because for all her power, the Nightcatcher doesn’t exert the kind of dominance on the world that the black-horned god did: Her breaching machinations seem to seduce you into thinking she is beautiful. Of course, this seduction into insanity is exactly the river Lily is trying not to drown in. For every sign of solid ground, there are three that betray it, like talking spiders and somnambulist ghost children and dresses weaved of living wriggling insects. Maybe Christian has made a meta out of her tale, showing just how unsettling an apocalypse can be with a whimper instead of a bang. –Megan Kennedy