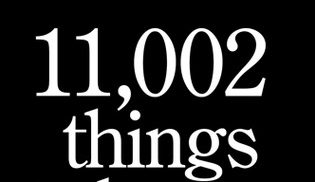 11,002 Things to be Miserable About: The Satirical Not-so-Happy Book by Lia Romeo and Nick Romeo 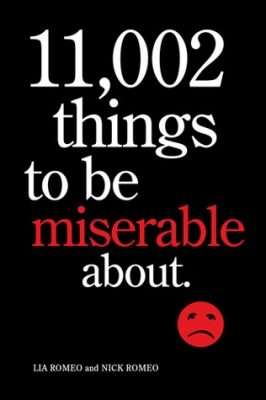 11,002 Things to be Miserable About: The Satirical Not-so-Happy Book
Lia Romeo and Nick Romeo

Abrams Image
Street: 02.09For my book-reviewing debut with SLUG, the powers that decided to task yours truly with this tome comprised entirely of reasons to be miserable…or rather two peoples’ comedic observations as to why human beings should be, or are, miserable, jotted down in almost shopping-list-style glory. Admittedly, it’s equal parts hilarious and disheartening, but it’s almost impossible to sit down with a cup of coffee and a smoke and attempt to read this book. Having watched Danny DeVito’s brilliant Throw Momma from the Train recently, this reminds me of the Pinsky character’s interpretation of literature, although instead of being about women the authors would like to have sex with, it’s an amazingly thorough list of reasons people should, well, be miserable. Myiasis (look it up) be damned! –Gavin Hoffman

Battle of the Band Names: The Best and Worst Band Names (and all Brilliant, Colorful, Stupid Ones in Between)
Bart Bull

Some books, such as Burton Silver’s Dancing with Cats, are so absolutely unique and hilarious that they are able to secure spots on coffee tables worldwide for countless years. Unfortunately, Battle of the Band Names is not one of those books. Sure, there have been bands for many years that have made their fans chuckle at their incredibly hilarious names, and though this book manages to document some of them, it does so in a manner that makes me bored and tired after only 20 minutes. Certain sections, such as the best band and worst band names, are absolutely bewildering. If anything, it seems that they judged these bands based more on their musical merit than their actual names. Maybe if this were a book that was about the actual bands that would be okay. It’s too bad that this book isn’t supposed to focus on that, even though it’s fairly clear that the authors do. –Ross Solomon

Days I Moved Through Ordinary Sounds
Teachers of WritersCorps

The variety of truly moving stories that come from the “at-risk” places profiled by the teachers of the WritersCorps non-profit group are stunning and deeply inspirational. This book is one long stream of bios, short works/selections, and introductions by some of the best writers, artists and poets in the nation as they were shaped by the WritersCorps experience as teachers. The group focuses on emboldened intervention through teaching the creative process in the lives of people on fringe––in homeless shelters, prisons, embattled schools, and more. The work of some of these poets (works I’m most partial to) is really evocative given the rare opportunity they have at the beginning of their section to explain how the WritersCorps program shapes their art. –JP