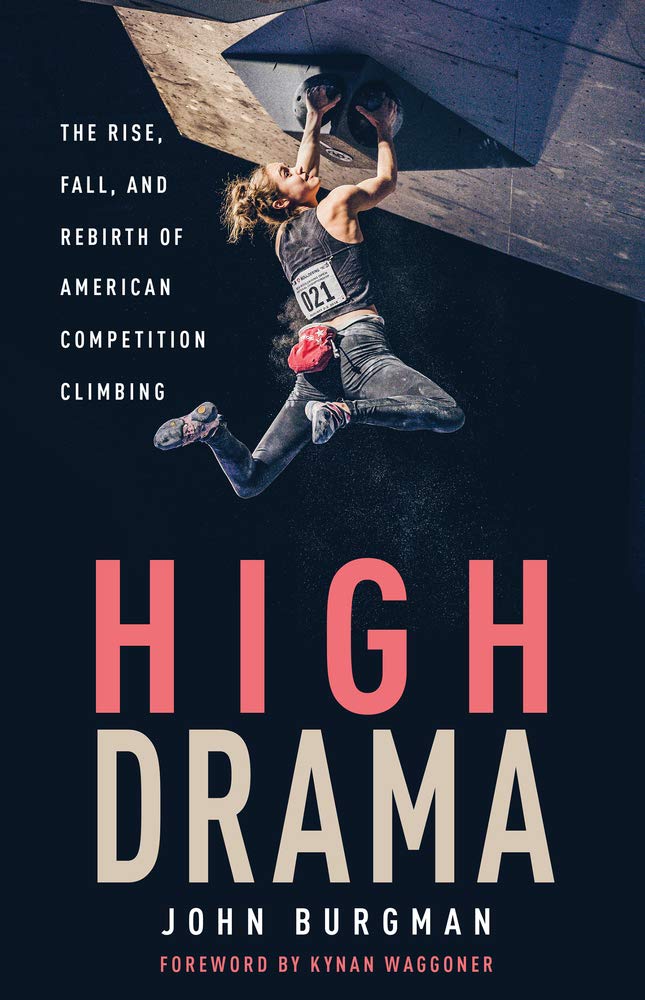 A good measure of any particular niche’s mainstream-ness is the breadth of its presence within the greater social consciousness. For example, imagine walking down a busy sidewalk in any city in America and asking a randomly sampled group of ten passers by who won the super bowl this year. Chances are, there would be several correct answers. What’s even more telling is that most would probably consider this a fairly normal question to be asking a complete stranger—football is widely popular; people know Kansas won; farewell to you, sir.

Competitive rock climbing, the subject of John Burgman’s new book High Drama, is less popular than football. While over 100 million viewers tune into the super bowl each year, many professional rock climbers still have day jobs. However, for the first time in history, the 2020 Olympic games will include rock climbing. In Tokyo, 40 climbers will compete for medals in front of the same massive television audience that once rallied around Michael Phelps and Gabby Douglas. Given the immediacy of this olympic milestone, the timeliness of Burgman’s book is no accident. High Drama is the most comprehensive account of competition climbing history to date, and it serves as pertinent and engaging context for Tokyo 2020.

Climbing is currently experiencing an extreme rise in popularity. In 2020, 75 new indoor climbing gyms plan to open their doors across the country. Millions of new gym members enjoy the combination of exercise and hanging out that climbing provides. Free Solo, a film about professional climber Alex Honnold, won the Academy Award for Best Documentary in 2019. Climbing now has a greater stake in our cultural awareness than it ever has before. This, combined with the looming olympic excitement, makes the present moment ideal for Burgman’s book to enter the world.

The timeline contained in High Drama commences in the 1980s. Compared with almost any other sport, competitive climbing is the bright-eyed youth: Its origin story is recent. It is odd to read a comprehensive history of anything that occurs entirely in the past forty years. Many of the characters discussed in the book that have shaped the sport’s trajectory are young enough to be found on Instagram.

Themes of determination and do-it-yourself ingenuity are central to the stories compiled in High Drama. In 1987, two young rock climbers in Berkeley California carried out a covert operation. After rappelling off the side of a freeway overpass, they glued bits of rock and concrete to the large vertical support pillars underneath. The trails of glued-on holds became climbing routes—and the creative effort to establish them is now considered legendary. In 1997, the 20-year-old Scott Rennak started a company that crafted hand-made climbing holds. A few months later, he purchased a climbing gym in Cincinnati. Over the following years, Rennak would build the most popular climbing competition circuit in America. These tales of passion-powered success are the formation of competitive climbing today—a shiny, established and well-oiled operation that exists because of the inventive individuals highlighted in High Drama. Burgman is thorough in his recollection of dates, time frames and various acronyms, but beyond the objective logistics, the flair of entrepreneurship is the greater story here.

It is clear that Burgman faced the task of hand-selecting historical anecdotes that best illustrate his version of the competitive climbing story. The book jumps quickly from one storyline to another, which works because the linkage between subjects is always made clear. The effect of this is a continuous throughline that rarely idles. High Drama reads as a clean progression from event to event, which must be the result of meticulous editing. Burgman’s writing demonstrates a knack for straightforward storytelling, and his word-choice exudes a deep personal affection for the topic.

In the midst of a history that is still young and actively developing, the timing of Burgman’s book feels mildly arbitrary. However, while climbing continues to boom and with the Olympics on deck, now seems to be an appropriate occasion for the book’s release. For climber-readers, High Drama will fulfill any inherent interest in the topic with entertaining tales centered around well-known climbing icons. Non-climber audiences will also find plenty to enjoy within this quick and approachable read. As motivational posters have long demonstrated, climbing presents many widely applicable metaphors—Keep going until you reach the top! This is the kind of value that Burgman is offering. Yes, this is a book about rock climbing competitions, but above all else, the compiled effort of devoted underdogs is the driving force of High Drama. –Austin Beck-Doss