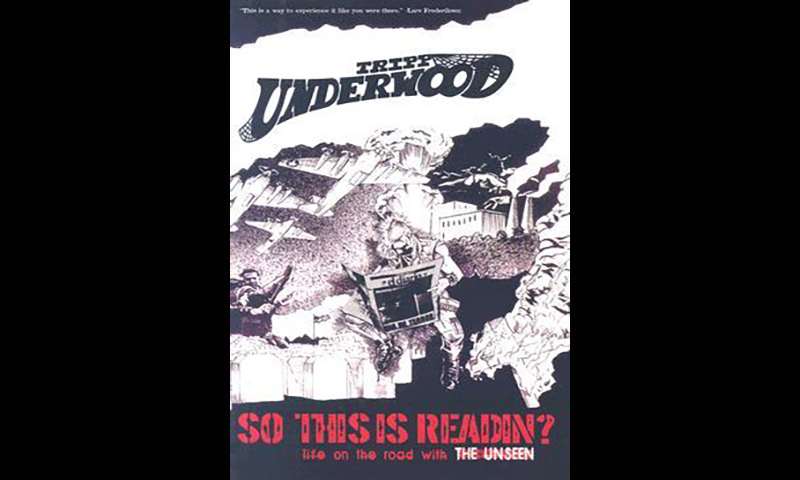 Review: So This Is Reading? Life On the Road With the Unseen

So This Is Reading? Life On the Road With the Unseen (Audio Book)
Tripp Underwood

So This Is Reading traces the history of the Unseen from their humble beginnings (in a garage at 16) to their current stance as a punk band that many kids have patches of sewed on their jackets. Tripp Underwood began playing bass in the band 13 years ago at its incarnation. He has given up a teaching career, wasted an expensive college education and lost girlfriends over the band. This is his story of his life with the band. The first two discs (which cover the early years of the band) were the most interesting. During these first discs you travel to the Unseen’s first real show at a shitty hair metal bar left over from the 80s, to a tiny studio in Maine that doubled as their home during the recording of their first album So This Is Freedom? and to Japan where they had the bad idea to hire an obnoxious AV guy, did a three week tour independent of any legit booking agency and drank with the Nagasaki punks in a bombed out building left over from WWII. The first two discs cover all the interesting parties, ridiculous fights and run-ins with the law. They also include rare tracks like “Countdown” and “Protect and Serve”. The last two discs become a little stale. The band becomes a more serious business venture and less of an expensive hobby. The same problems continue to plague the band, but the crazy adventures are less frequent. Tripp has found a way to bring the touring experience to a person who hasn’t ever done it. He’s also found a way to bring his story to the handful of illiterate punks (how many can you count that have “fuck books” written under their favorite books on Myspace). Luckily this four-disc story can be enjoyed the old fashioned way too being read instead of listened to. – Jeanette Moses