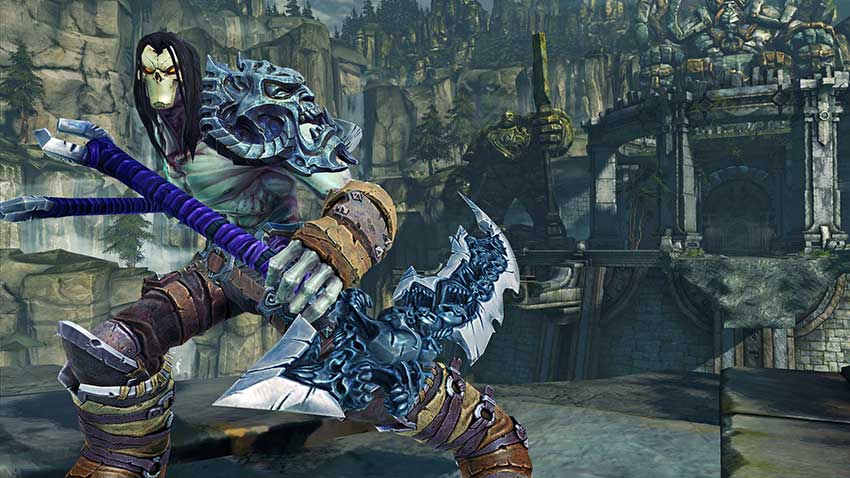 Sitting down to play Darksiders 2 Deathinitive Edition is a lot like revisiting a mixtape that you made back in high school. Hearkening back to that gaming sweet spot in which third-person puzzle platformers like Legend of Zelda: Ocarina of Time and The Legacy of Kain series were hot shit, it’s a welcome diversion from the open-world games of today. While Darksiders 2 Deathinitive Edition offers up a handful of sidequests and a considerable arsenal of upgradeable loot, it dutifully sticks to its linear story and equally linear gameplay.

The mythology behind the Darksiders series swells with a convoluted mess of Nephilim (powerful beings that are spawned from a union between an angel and a demon), harbingers of the apocalypse and the extinction of mankind. Darksiders 2 Deathinitive Edition picks up after War, the previous protagonist has been imprisoned. The sequel puts players into the character of Death, a masked, greasy-haired bruiser who seems to have been pulled directly from the WWE roster. Even though a geriatric crow dude explained to me why and how I was supposed to free War from his sentence, it was difficult to really wrap my head around why my character was going to spend the game zipping around the world, slaughtering monsters and unlocking doors.

The overstuffed, quasi-religious storyline, Notwithstanding, Darksiders 2 Deathinitive Edition is a beautifully animated game. The Deathinitive Edition (see what they did there?) polishes the game’s already vibrant animation into 1080p goodness, and the character designs are reminiscent of Chris Metzen’s early work with Blizzard. The game’s environments are immersive, and completely match the high fantasy tone of Death’s world. We’re encouraged to deviate from the obvious pathways to search for treasure chests, but it’s also a great excuse to explore the vibrant world that Vigil Games has created. Despite the lushly-rendered graphics, Darksider 2 Deathinitive Edition is not without a few buggy moments. There were a few times in which I got stuck inside a wall or the camera panned through an impassable piece of the environment.

Combat in Darksiders 2 Deathinitive Edition is fast and frenetic, and Death comes equipped with a whole book full of combos and special abilities—think Dante from Devil May Cry but with dual scythes and the power to raise a posse of ghouls from the dead. Combat scenarios are satisfying at first, but soon lose their luster. I found myself grumbling every time I had to fight through a group of enemies in order to progress through a level. Boss battles are a bit more entertaining, but the game’s real strengths involve taking in the gorgeous scenery and solving progressively more difficult environmental puzzles. Hitting the sweet spot between pleasantly challenging and controller-chucking frustration, the gameplay of Darksiders 2 Deathinitive Edition keeps the player engaged in the quest to see what comes next. A big part of this comes from the game’s surprisingly deep loot system. Death is constantly finding upgraded primary, secondary and tertiary weapons, and there are tons of different armor pieces, each of which add a new flair to Death’s appearance while buffing up his stats. Every time a treasure chest popped up on the map, the loot junkie inside me abandoned whatever fight or puzzle that I was currently working on to crack that sucker open.

Not only does Darksiders 2 Deathinitive Edition offer a 30-hour trip down memory lane, but it’s cool to see how much sandbox games like Assassin’s Creed and Uncharted pull from these bygone third-person action platformers. The conflict between all of these AAA protagonists and their respective environments has become more complex, but at the core of every sandbox game is a humble puzzle platformer.