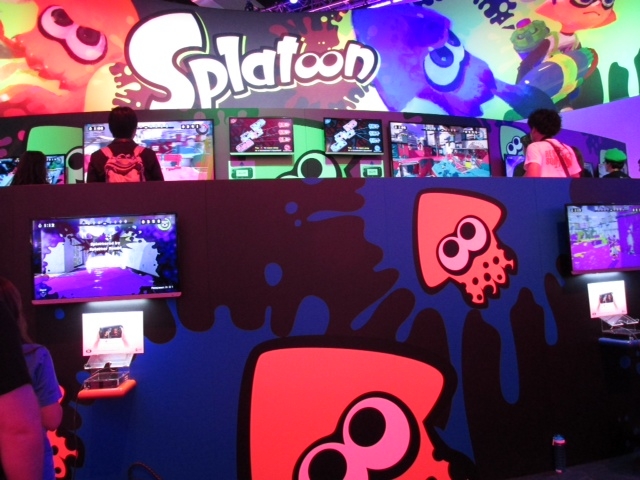 E3’s final day was bittersweet. I finally finished up my Nintendo lineup and got to check out some amazing indie games. It’s also the last time I’ll get to play these games until the release – in some cases, not until the end of next year. It’s been a great and exhausting three days, but I guess it’s time to return to the real world. Here’s all the good stuff I saw on my last day.

To start the day, I went straight for one of Nintendo’s more interesting new properties – Splatoon. In Splatoon, you’re on a team with three other squid-people fighting another team in a turf war. You try to cover as much area as possible with your ink along with your teammates. You can choose between the gyroscopic controls and using the joysticks to aim. In the ink, you can transform into a squid to recharge your ink, ambush your enemies and move across your territory quicker. It sounds really weird, but it works. The transition from human form to squid is virtually seamless and it’s satisfying when you successfully surprise your enemies with a huge ink bomb that sends them back to the starting point. From what I’ve played, this is going to be a great multiplayer game. It’s a ton of fun and the HD graphics are beautiful and bright. I can’t wait to play this against my friends when it comes out next year.

Mario Maker was my next and last stop in my Nintendo run. This is one of those games that I’m amazed Nintendo hasn’t come out with sooner. It’s beautifully designed and it’s a ton of fun trying to get through the levels you create. It’s so easy to use that everyone can enjoy this game. Once you click on edit, all of your options appear at the top and there are many. You have a plethora of options for the basics of the level – the ground, question blocks, pipes, coins, etc. You also get your choice of enemies – goombas, koopas, piranha plants and the dreaded hammer bros and you can add wings to all of your enemies to make them even more difficult for you or your friends. Once your level is complete, you can choose between old school graphics and the graphics of today.

After I finished with Nintendo, I made my way over to the IndieCade. These guys are dedicated to showing the entire world some of the best indie games out there today. They’re holding the IndieCade International Festival of independent games in California to showcase a bunch of other games. They had a ton of games all in one place – so many, that I couldn’t visit them all. It wasn’t just video games, they had card games and a couple of tabletop games to check out.

I started off with a card game, called What?!? Oh… “It’s a game of easy improv, where the sport of talking meets the challenge of listening.” It’s a conversation game, where if you forget to answer a question, you lose the round. My little demo session showed me that it would be a great game to play with friends. You start the round with an emotion, a location and a sentence to start the conversation. Once you do, people begin to play talking cards and question cards to keep the conversation going. If you forget to answer the question, or play a card over it the round ends and the person who played the question card wins the round. It was an interesting little game that was kickstarted successfully and will be available on Amazon over the summer.

Next, a bright, colored game called Close Castles. It’s a tower defense game where you need to defend your castle from other invading castles. In order to defend your castle, you have three different buildings to build. A tower for defense, houses that spawn your fighters, and a market to make you the money to build all these buildings. The object of the game is to knock down the other castles so strategy is key. I’ve seen people build a ton of houses right off the bat so they attack you faster. I’ve also seen people build markets first to get money in the bank. It’s an interesting take on tower-defense games but the build I played was a little buggy so there’s still a lot of work to do on the game.

Bounden was the game I got pulled into next. This game is one of the most inventive games I’ve played – it’s a game that teaches you how to dance. The Dutch National Ballet actually helped with the choreography. It’s an app out on the App Store right now and you’ll need a partner. You’ll both hold one edge of the iPhone or iPad, just below the camera and above the home button. The object is to move a pac-man looking icon around an orb, making sure the icon goes through a series of rings. It would be easy, if you were alone. A partner means moving together to get the icon through all the rings and it gets complicated quickly. You need to turn around each other, move the device up and around each other. It’ll be out on Android in the next few weeks but it really is a sweet innovation by some people who love dancing.

After dancing around the booth with a stranger, I took a seat to play …and then it rained. It was a soothing game to play. Colored raindrops fall from the top of the iPad and you need to catch them in the correctly colored buckets. It sounds easy, but each time you move a bucket, the other buckets move. You have to move the buckets around in the correct order to make sure the rain falls in the right colored bucket. Each wrong move diminishes that buckets life, but every right color brings it back up. It’s out on the App Store right now for a few bucks. It’s a bit over priced given the graphics, but if you need a new quick-play game, this one will keep you satisfied.

The last game I checked out, was developed by some students for the University of Utah. It’s a game that ports your music to create levels. It’s called Vinyl and it’s out on PC right now. You surf the levels the game creates and avoid obstacles. Once you hit an obstacle, you slow down as well as the music. The way the song sounds is wholly dependent on your moves in the game. As you successfully pass obstacles, you build up an action gauge that will allow you to rewind time if you mess up or destroy obstacles within a certain range. It kind of sucks messing up your favorite songs as you learn, but it’s a cool feeling when you get it right.

E3 isn’t all about the giants like Nintendo, Sony or Microsoft. It’s all about the games and showcasing the best. It’s a fantastic show that brings people from all over the world in. My street passes and conversations confirm that. Going to E3 was living the gamer dream, except that it was better.